The Cynic, the Rat and the Fist 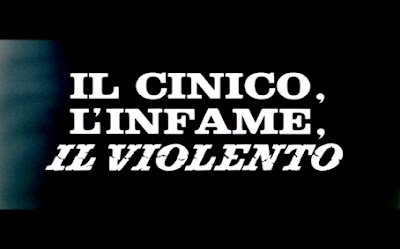 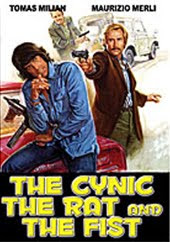 Of all the genre’s that Umberto Lenzi tried his directing skills in, I feel that the Poliziotteschi flicks are among his finest. Obviously there are several brilliant entries of his to be found on the other sphere’s – Cannibal Ferox 1981, Nightmare City 1980, The Oasis of Fear 1971, Seven Bloodstained Orchids 1972 and Eyeball 1975 to name a few, but it’s the Poliziotteschi that I find myself returning to and rediscovering with a new passion that wasn’t there the first time around. The Tomas Milian pieces, like Almost Human 1974, Rome; Armed to the Teeth 1976 and The Rat the Cynic and the Fist, stand out and have against all odds stood up to the tests of time. 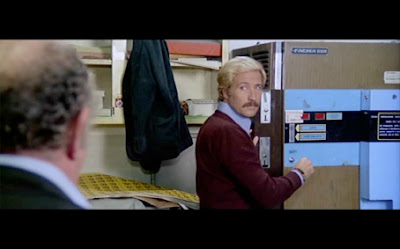 The Cynic, the Rat and the Fist is a fantastic piece of Italian genre cinema where the title possibly refers to Sergio Leone’s splendid spaghetti western The Good, The Bad and The Ugly 1966 and saying that, there’s more to the movie than just a cryptic title. Maurizio Merli is obvious the Fist as he slugs his way through the antagonists of the film, then there’s Tomas Milian in one of his finest performances ever, as Luigi “the Chinaman” Maietto, without a doubt the cynic of the piece, leaving John Saxon as the rat, or rather the Infamous as the original titles call him. Some stuff just get’s lost in translation doesn’t it. 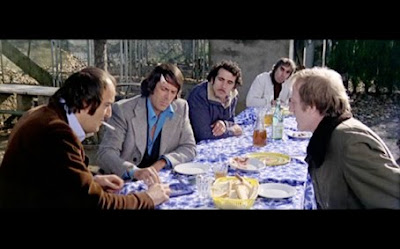 Performances are tight, and well acted, Merli is great in this sequel to Lenzi’s previous piece Rome: Armed to the Teeth, which also sees Merli in the role of Inspector Tanzi. But the movie definitely belongs to Tomas Milian in a performance that out shines both Merli and Saxon by yards. He owns this piece with his sneering, sinister criminal who just oozes cynicism towards the law officials, the mob Boss Frank Di Maggio and even towards his once cohorts that he eliminates on his struggle towards the top of the food chain. 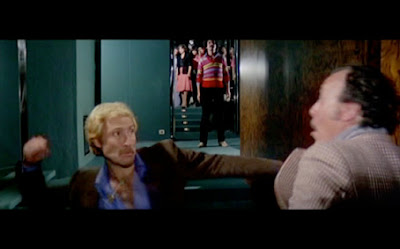 As usual, here’s a quick fix on the movie to remind you, or wake your interest for the film: Leonardo Tanzi, once Rome’s most feared police inspector has handed in his badge and now works as an editor of murder mystery novellas. (Watch the scene closely and you’ll see that its Gialli books he’s working with) When he learns that upcoming criminal Luigi “The Chinaman” Maietto has been released from the pen, he’s not so surprised to find his own obituary waiting for him under his door when he returns home. Shortly there after Maietto’s hit men make their entry [Bruno Corazzari and Claudio Undari], and after taking a few shots at Tanzi, they leave him for dead. Once a cop, always a cop is the pathos that Tanzi lives by, and after his former boss, Commissioner Astalli [Renzo Palmer] forces him into hiding so that they can lure the guilty by claiming that the legendary Tanzi is dead, Tanzi becomes a one man vigilante working outside the law. Obviously Tanzi doesn’t hide from anyone, and pretty soon he gets himself involved in rescuing a colleagues young sister from the hands of a pornographer who keeps his models/prostitutes on a strict diet of smack. (Bo A. Vibenius Thriller - A Cruel Picture anyone?) Herein also lies the connection to Maietto. 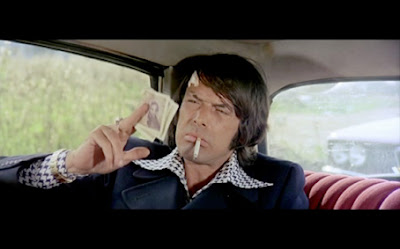 Trying his damndest to move in on American mobster Frank Di Maggio’s [Saxon] turf, Maietto is pushing the good old “Protection” racket, which obviously clashes with Di Maggio’s interests and Tanzi’s morale values. Slowly but surely the three opposing parts twist and grind their way through a grid of double crossing, enforcing violence, cunning heists and sadistic actions towards a climax, a climax that comes with a splendid blaze of glory as the three leads finally stand face to face. 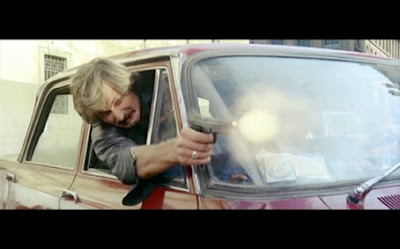 What I feel makes this piece quite entertaining is that there are so many rifts and conflicts on both sides of the law. There are the conflicts on the criminal side, Di Maggio vs. the newcomer Maietto, and there’s certain tension between Tanzi and commissioner Astalli, which gives a deeper dimension to both the characters and the narrative. It’s an amazingly entertaining ride which I already said stands out among both the genre and Lenzi’s work. 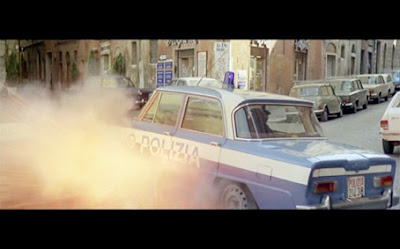 Along the way there’s some great supporting cast performances by Bruno Corazzari, Claudio Undari, and the man who is almost everything worth watching Fulcio Mingozzi makes yet another short appearance. It’s a pretty male dominated movie, as nearly no women hold any specific role in the plot, other than scared victims for Merli to rescue and save, although Gabriella Lepori does have a bit of importance as she brings the narrative to an important junction, and connects the pornographer’s mischief to the racket Maietto has going. 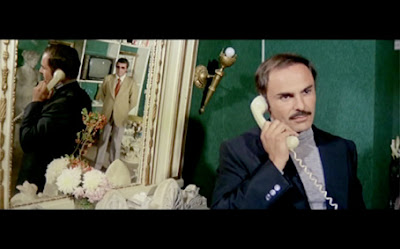 Now there’s no way to discuss this movie without mentioning the great Ernesto Gastaldi. Ernesto Gastaldi’s name in the screenwriting credits is enough to make me want to watch the movie. If you are a regular reader, you will now that I can rant on about on his resume – Bitto Albertini’s Human Cobras 1971 and all those great Sergio Martino, Luciano Ercoli and Lenzi movies to name a few names - and there’s no doubt that Gastaldi is among the greatest of the Italian screenwriters. He frequently manages to bring depth, and complexity to the characters that so usually are mere generic personality. Just take a look at what he did to Maurizio Merli’s character police detective Leonardo Tanzi in the two movies of that series. In the second of the films, The Cynic, the Rat and the Fist, he injures the lead character, Tanzi, early on in the movie only to have him rubbing his sore wound over and over again. It also works as an instrument to give the character some personality and bring him down to a human level. He is vulnerable, but still doesn’t back down from busting up a few criminals despite his injuries, even if his actions make him sore. It’s something that action hero’s seldom consider as they move from one scene of severe damage to full fledged ass kicking without any side effects in the next scene. If you pay attention to the names of the writers in the opening titles, you will also spot Dardano Sachetti among the writers. With movies like Dario Argento’s Cat o’ Nine Tails 1971, Mario Bava’s A Bay of Blood 1971, almost everyone of Lucio Fulci’s classics, Murder to the Tune of Seven Black Notes 1977, Zombie 1979, City of the Living Dead 1980 and the others, Antonio Margheriti’s Cannibal Apocalypse 1980 and many many more, it’s no understatement that Sachetti is quite possibly the greatest of them all, and with the two giants of Italian screenwriting working off a Sauro Scavolini story, on the same movie, there’s no more reason to hesitate about this one. The Cynic, the Rat and the Fist is a must see movie with an excellent script, great actors, and a terrific entry into the Poliziotteschi genre. 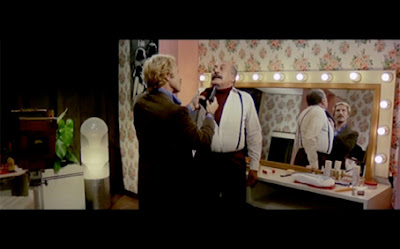 Franco Micalizzi’s score is excellent, and holds some strong reminders of Stelvio Cipriani’s scores for movies within the genre, although with Micalizzi’s unique fully orchestrated funk jazz umph to it. For some strange reason the Soundtrack is available under the name Violence… Once again Eugenio Alabiso’s editing is tight and ferocious, adding to the rapid pacing of the scenes, and thanks to the widescreen presentation that I recall wasn’t there in the previous vhs version I used to have of this magnificent movie, Federico Zanni’s excellent cinematography come to it’s right. Certain scenes could actually be lifted from this movie to show cinematography students the power of composition and value added to a scene by simple effects as framing the shot in the right way.
The Cynic, the Rat and the Fist is a definitive statement to the craftsmanship of Umberto Lenzi, a guy who easily get’s lost as a second rate director among the many cheesier of his movies, especially the later ones, but this one is a gem and proves that Lenzi really had the knack for putting forth tight action movies that still work perfectly to this day. 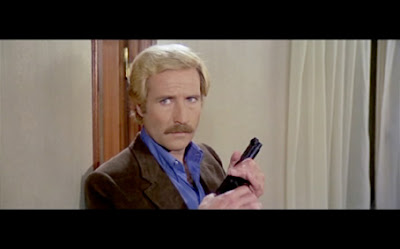 Image:
Widescreen 16:9
Audio:
Dolby Digital Mono, English Dubbed version, which will give you a few laughs with the voice Saxon has been given.
Extras:
Nothing special, just the original theatrical trailer.
- February 22, 2010

Lenzi was a genius (and I still think he is). I don't think anyone should blame him for lesser horror movies, because many of them seem to have been forced on him - he only seem to enjoy making action and war-movies anyway :)

And Eyeball is very underrated. A bit cheesy, yes... but it has a lot of very stylish moments!

I completely agree. I have always had a problem calling movies bad or good, as each movie will be seen independantly by each person. Although there are movies that appeal to us on various level's and it not realy fair to complain about a "crappy" movie when there's actually someone who made the movie. That's at least one movie more than the majority of the complaining moaners have ever made.

And yeah the Italian movies of that time was, and probably still is in any indiependant system, quite filled with movies that where "forced" upon directors who perhaps had a completely different vision than the final product became.

oh my god, not you too! hehe

This is down as my next review and now today this is the second review of this baby that has been blogged- samuel wilson has also reviewed this one.

My favourite Lenzi remains the much-underrated "SPASMO" and I hugely enjoyed "EYEBALL" despite all the flaws.
Haven't seen "THE CYNIC..." yet, the fact that Merli is in it does put me off. I just cannot relate to him, unlike Milian or Franco Nero.

No he's certainly no Nero, or perhaps the cheaper version. But he's allright here and it's Milian that make it worth while.