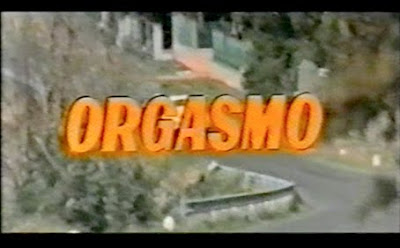 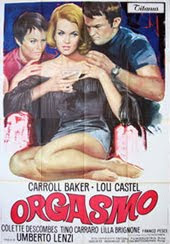 Umberto baby – what a trip! As customary I’ll start by saying it again, stick Make them Die Slowly back in it’s case, and seek out the older Umberto Lenzi Gialli and thrillers, because they are some really excellent movies back there that give a better insight into the arts and crafts of that fantastic director. 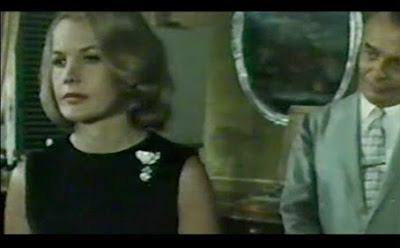 Lenzi’s career more or less follows the trail of many other great genre directors. He started out way back in the fifties when he used to write critical essays on film in magazines and newspapers whilst he was attending school with the plan of becoming a lawyer. He also penned several adventure and detective stories under a different name. The obvious step to take after completing school and realising that he held a passion for cinematic storytelling led him to landing a job as assistant director on Renzo Merusi’s anti-communist movie Apocalisse sul fiume Giallo (Last train to Shanghai) 1960 starring sexy Swedish export Anita Ekberg. 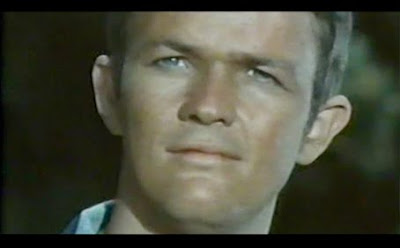 Following his directorial debut with a pompous period piece – pompous in a good way that is – Le avventure di Mary Read (Queen of the Seas) 1961. From there on he busted onto the scene with a string of Spaghetti Westerns, period pieces, action thrillers, sword and sandal adventures before he rekindled with that genre he’d been so fond of previously – the mystery genre. He did this with a loose trilogy all based on the themes of deception, double-crossing and death. Orgasmo (Paranoia) 1969, Così dolce… così perversa (So Sweet… So Perverse) 1969 and Paranoia (A Quiet Place to Kill) 1970. See some knob somewhere decided that Orgasmo should be called Paranoia which screws things up for that later movie doesn't it, and don't be misled by the title, Orgasmo isn't a screw movie, it's a genuine mystery thriller. 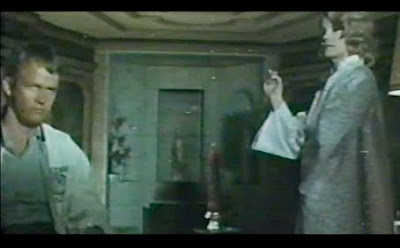 Orgasmo starts off the trilogy of mystery, and also sees the first of four collaborations between Lenzi and actress Carroll Baker. She would go on to star in the following two and the later early Giallo Il coltello di ghiaccio (The Knife of Ice) 1972. Lenzi show’s that he completely understands that there’s no need to waste valuable time on exposition and starts off with Kathryn West returning to Rome after her husband has suddenly died in a freak car accident – there’s no pointless funeral and wishy washy going on, but instead he cuts right to the chase and starts it all off. Some time is spent on establishing Kathryn and her world, her close friend Brion Sanders [Tino Carraro] who deals with all the paperwork following husband Robert’s death and Teresa [Lilla Brigone] who runs the mansion. A soon as we know the setting, Peter Donovan [Lou Castel] makes his entrance. Honking his horn and shouting aloud it’s a fair bet that he’s the antithesis of all Robert once was and it’s no wonder that Kathryn is drawn in by his rough charm and arrogant frankness. 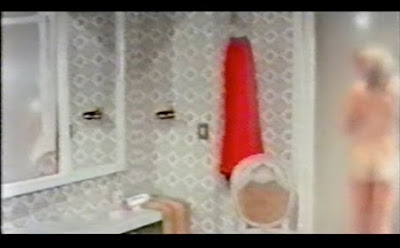 But as soon as Kathryn find’s happiness, there’s going to be something negative to shake that foundation of pleasure. This comes in the shape of the late Robert’s relatives who don’t take to fondly to the young wife he once had and a bickery bitch fest is on the way. Luckily for Kathryn she has the trusty Brion at her side to pick her up when she faints. A rather innocent and deceptive subplot is set in motion when Brion starts to vaguely express his emotions towards Kathryn. But, and there’s always a but, Kathryn is all about her new young stud Peter who at the most unexpected moment surprises Kathryn with the arrival of his sister Eva [Colette Descombes]. 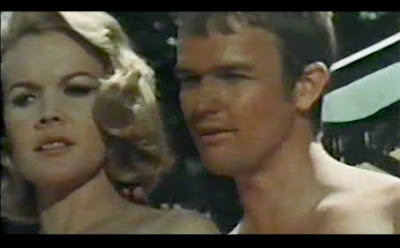 From here on the movie takes a plunge into subtle and lusty exploration, there’s a delicate, provocative and suggestive eroticism between the three characters which slowly shifts into a sadistic deconstruction of Kathryn’s mental state. 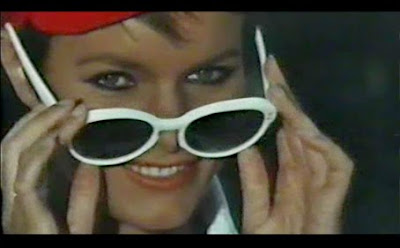 In the last act, Kathryn uses all her strength to break free from the now abusive couple and certainly put’s up a great fight, but weakened both mentally and physically from long sessions of drink and drugs this is one battle she appears to be loosing. Never the less, Lenzi and co-writers Ugo Moretti and Marie Claire Solleville have a series of surprising twists and shocks up their sleeves before the movie finally comes to it’s crashing climax. 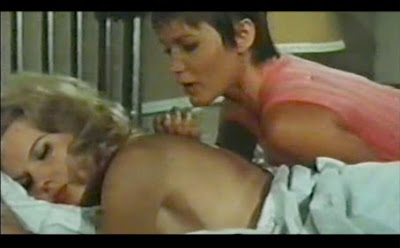 The editing style of Enzo Alabiso (wonder if he's related to Eugenio Alabiso?) is evident and a vital component of the movie. It moves rapidly and forcefully without taking unnecessary breathers that would have slowed down the pacing of the piece. Lenzi would use the talents of Albiso on several movies to follow. So keep your eyes on the screen because Orgasmo moves fast. Adding to the determined forward movement of the piece is cinematographer Guglielmo Mancori’s effective bag of tricks. Orgasmo is riddled with delicate dolly moves, fast swoosh pans and crash zooms to corner in the vital moments – most often focusing on Carroll Baker’s various facial expressions. Mancori and Lenzi would work together on at least seven more movies and Macori would go on to shoot some great genre pieces before calling it a day at the end of the eighties. 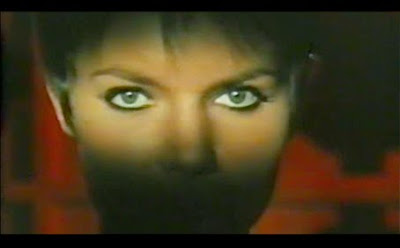 There’s the score. A vibrating and quirky score by the majestic Piero Umiliani who you know from such great pieces as Luigi Scattini’s Svezia, inferno e paradiso (Sweden Heaven and Hell) 1968, Mario Bava’s 5 bambole per la luna d’agosto (Five Dolls for an August Moon) 1970 and Corrado Farina’s Baba Yaga 1973 – which also starred Baker in a leading part. The score starts of very suave and quirky, but develops alongside the tone of the movie, the darker the movie gets and the deeper Kathryn falls into her mental decent. 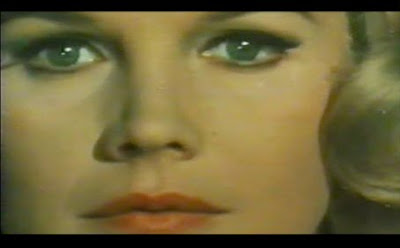 The vocal piece of the movie Fate had Planned it so sung by Lidia MacDonald (the Scottish born singer who also sings on the Sweden, Heaven and Hell album - a must if you don't already have it) is used rather sparsely and holds a wonderful cynical mood that fits the movie, the more rockier track Just Tell Me performed by Weiss and the Airdales is the one that sticks out, but with reason, as it’s used several times to mark a rift between the very young Paul and Eve and the middle aged Kathryn. 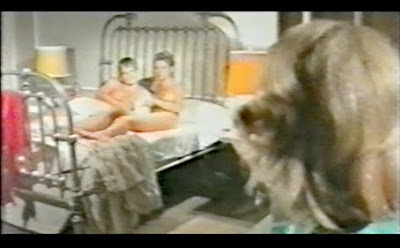 An interesting final note on Orgasmo can be found in the fact that the Italian version differs from the American version. The ending of the American version brings a satisfying justice to all ending, but leaves certain valuable information out of the conclusion. Where as the original Italian ending stays closer to that cynicism that we all love about Italian genre cinema and ties in with the references to Robert’s sudden death in that car accident which is mentioned on several occasions. Without the conclusion to this important arc, the referents seem odd and out of place, and rather posing the question what happened to Robert? Well the answer, as told in the Italian version, is that Kathryn isn’t quite the hapless victim that she seems, but rather the initiator of an previous scheme outside the main narrative to claim the entire will and estates of Robert for herself. His death makes her a terribly wealthy widow! I can’t tell you why the decision to change Kathryn's character was made, but perhaps it was in a move to make her a more empathetic victim rather than a cold hearted and complex villain. Lack of dimension and polarisation has always been a favoured trait in American cinema so I’d guess that’s why. Also the Italian version is a preferred piece as it also has a lot more of the sensuality and nudity that comes with the blooming relationship between Paul and Kathryn and later Eve, which the American version exorcises on at least three occasions. We can’t have our empathetic victim being a sexual predator, enjoying both straight and lesbian sex can we, because we all know that bad girls go to hell and we have to keep it easy to follow… 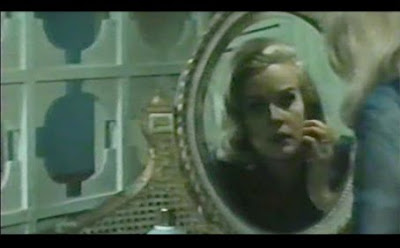 Orgasmo is a riveting movie, which definitely demands that someone salvage it from poor quality copies and re-releases it in a pristine version because it’s a true gem that most certainly will find a new audience. It’s high on entertainment value, effective and still has a decent surprise ending even though there’s an endless amount of movies been made in the same niche both before and after this one. But if you are looking to explore early Umberto Lenzi, the mystery trilogy is an excellent place to start before following the path of evolution towards the splendid Gialli to follow. Just make sure to enjoy the Italian version not the American one will you. 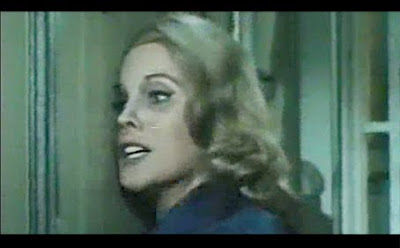 Love early Lenzi.
Adore work of Guglielmo Mancori, especially on SPASMO and MANHATTAN BABY.
Need to watch this.
But damn it Lou Castel looks ugly, almost as ugly as the bootleg print judging by the screengrabs:)

Alex! Great to see you again!
Yeah I completely agree with you. Early Lenzi is the fantastic. And yeah it sure is a shitty bootleg, actually two different ones, as I needed to grab two shots that where not in the US version...

You really should check this one out. It's not freaky like the gialli, but still a damned good movie.

I need to watch this too - Lenzi was maaking some really fun stuff in this period.