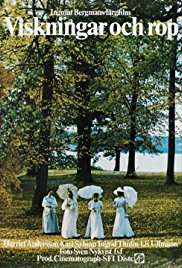 In just a few weeks it will be what would have been Ingmar Bergman’s one hundredth birthday, hence grand celebrations here in Sweden all this year, and for me a chance opportunity to rediscover a filmmaker I’ve not been too fond of until these past years. But growing into Bergmanmania, I found my own way of reading him, as I’ve been exploring the Bergman through the perspective of a horror fan and his film through horror/genre aesthetics.

Three sisters, Maria (Liv Ullman), Agnes (Ingrid Thulin) and Karin (Harriet Andersson), and maid Anna (Kari Sylwan) are gathered together as Karin faces death. As Karin goes through the throws of her last day in life from an unmentioned painful slow death, the sisters reminisce of life and their relationships.

Cries and Whispers is a tour de force of Bergman filmmaking. It’s a no-holds barred, ruthless spiral of death and emotions with some of Bergman’s most haunting and disturbing images.

The silence. That’s what strikes me with this film. The silence. At times there’s almost no ambience at all, to such an extent that it’s nauseating. The silence lies like a wet blanket upon your senses only to be yanked off as screams are hurled at your eyes and ears. The titles Cries and Whispers is perhaps the most fitting title ever to describe a movie, because that’s EXACTLY what this movie is; Cries and Whispers.

This is also the movie where genital mutilation is featured (Again a deliberate provocation by Bergman to shock and disgust his audiences). One of the sisters, Agnes (Thulin) so shut off from her emotions shoves a shard of glass up her vagina and then invites her husband into bed only to feel something and to provoke a reaction from her husband. In a way it’s a first resistance against the patriarchy that oppresses the women of this movie, because it’s only after she’s stripped of all the bondage of clothing that she’s free to rebell and break away form the “tangle of lies” that she repetitively speaks. The tangle of lies being confirming to the patriarchal structure, something that Agnes breaks out of along the way. As the film reaches its end, it’s still only Agnes who’s had a change in character. She’s gone from the passive cold stern older sister to the active one who wants to stay in a loving bond with Maria.

Bergman’s obsession with ghosts, a clear Strindbergian influence of his, the ghosts and otherworldly presence is present again. (He also points out in one of his notebooks that the character Agnes is a homage to Strindberg’s A Dream Play and it’s lead character Agnes), Even though Karin is dead, and this is no spoiler, it’s inevitable, she strangely gives an impression of being alive as she cries and asks to talk to each of her sisters, and if you want to take it even further, she actually tries to bite Maria, which we all know is the characteristics of a ghoul, to feed of human flesh after death. Which also leads me to point out that the fade to black between scenes, is fade to red, symbolic for both life and death.

Noteworthy, the sisters read to Karin from Dickens The Pickwick Papers. A chapter where Pickwick meets his companion Sam Weller. Now Sam and Pickwick have at times been compared to Sancho Panza and Don Quixote, which can be read as a metaphor for mental illness, and in an intertextual way, this links into Harriet Andersson’s character Karin in Såsom I en spegel (Through a Glass Darkly) 1961 both by name and by the symptom of suffering from persistent disillusions.

I also think that there’s a vague hint of lesbianism in here. The way Anna tends to Karin and the imagery that it ends up in a stylistic image that leads the thoughts to17th-century Madonna imagery.

With all that said… try to comprehend that this movie was co-financed by Roger Corman and distributed at the drive in’s through his New World releasing… WHAT ON EARTH did those poor drive in patrons make of this piece of dark, depressing Scandinavian art cinema?