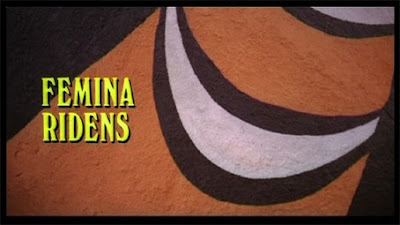 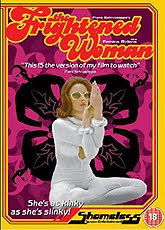 Aka: The Laughing Woman 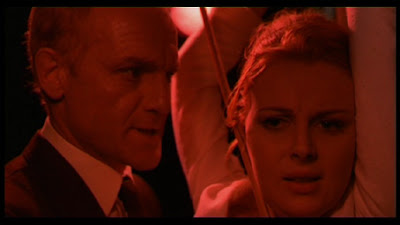 Femina Ridens could easily be viewed as being degrading towards women, as it does deal with a topic that will at first estrange women and could be perceived as objectifying them. This would be an easy statement to make about this movie and many like it in the ”exploitation” genre. But if you where to claim that this movie is an insult towards women, then it’s a fair guess that you have missed the point of the movie (or fell asleep before the final reel) as I would claim that the major plot twist makes this movie a highly feminist movie. After all who is using whom for their own needs here? Who is the protagonist and who is the antagonist? 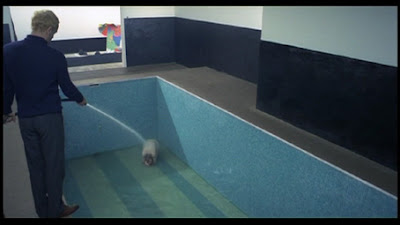 Maria [Dagmar Lassander] is an eager journalist who get’s an opportunity to spend the weekend with Dr. Sayer [Philippe Leroy, who you possibly saw in Dario Argento’s pale finale to the Mother’s Trilogy, The Mother of Tears, Umberto Lenzi’s splendid Gang War in Milan or Lilliana Cavani’s The Night Porter, yeah the one that jumpstarted the Nazisploitation genre], whom she plans to spend a few nights and days with so that she can get the scoop on him. She suspects that he is a murderer who kills his victims as he climaxes during sex, and she's going to bring him in. Or at least that is her initial plan...

Getting into action, Maria goes home with Sawyer but soon finds that he’s once again setting his sinister plans and sexual fantasies into action as she's lured into a fiendish world of sadomasochistic eroticism. At first she resists, but with time she starts to come around, only to learn that Sayer instead rejects her once she has submitted to him. Maria becomes desperate, and continues to play along with Sayers sadomasochistic games, and in one weak moment he confides in her and shows her photographs of his previous victims… 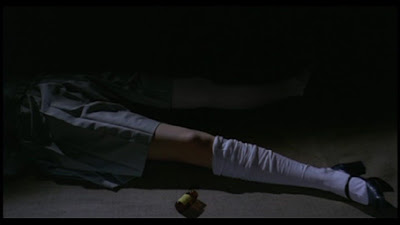 Now terrified of becoming Sayer's next victim, Maria tries to commit suicide by downing a fistful of pills instead. This is where things start to get really interesting. When Sayers realises that Maria dying would deprave him of his latest sex slave, he saves her. But this rescue isn’t salvation but instead becomes his damnation. He starts to feel emotional towards Maria, after all he shared his secret of the murders with her, and she listened to him tell the tale of his childhood memories, she knows him on a deeper level. (Which could be of use for her invest gory newspaper article!)

Dr Sayer, also grows as a character, in his fear of loosing his sexual play thing, he tends to her and nurses her back to health, and the two find themselves growing closer and closer. But subtly Maria is taking the dominating role instead of Sayer. It is now she who resists his approaches, as he moves in for intimacy, she backs off, taunting him in the same way he taunted her earlier. 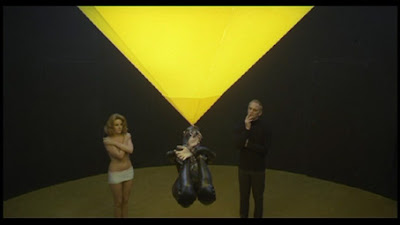 Finally the climax to their erotic sadomasochistic game, in a sudden twist that you possibly may have seen coming, but at the same time a highly satisfactory climax, and the same one I claim makes this movie a feminist movie. Ages ago academics like Cynthia Freedland and Laura Mulvey argued that classic filmmaking is dominated by the “Male Gaze”, i.e. Women are only objects on screen for a male audience to google at, hence the starting accusation of this piece that it could easily be seen as a classical movie where females are only there to bring a voyeuristic and erotic element to the movie. But as I also pointed out the roles change and with the final scenes the tables have been turned on “us” the male audience, and if we follow Carol J. Clover’s writings on the female role in “horror cinema” she points out that we actually accept the fact that we identify with the “final girl/women in peril”, hence rendering her an active, valuable character and in no means passive and unimportant. That is exactly what happens here, as the final scene is played out. The rush of insight makes us realise that Maria is not a victim in yet another cheesy chauvinistic exploitation flick, but a strong, determined predator with a very obvious agenda that she is following in a splendid genre piece that plays with traditional gender roles and prejudice inherited from previous entries in the genre.

Trashy, 60’s pop arty, bold and an excellent movie to say the least. The cinematography by Carlo and Sante Achilli is fabulous, often reminiscent of Gialli photography, and relying heavily on symmetrical compositions to create stern images that go hand in hand with the strict and spartan modernism of Dr. Sayer's house of sin.

Producer Guiseppe Zaccariello only produced a handful of movies, among them Mario Bava’s milestone Giallo A Bay of Blood [1971], Rino Di Silvestro’s Nazisploitation Deported Women of the SS Special Section [1976], and Joe D’Amato’s Jungle war/Spaghetti Western hybrid Tough to Kill [1978]. Zaccariello not only produced, but also wrote scripts, and got a screenwriter credit on all three movies which all, by coincidence, just like Schivazappa’s Femina Ridens feature great scores by maestro Stelvio Cipriani. 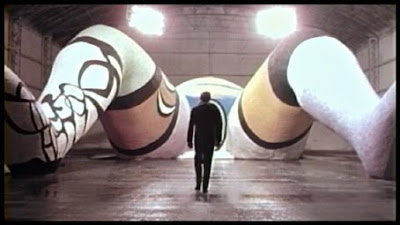 If you are into that Freudian analysis thing, then you’ll have field day with this movie. It’s riddled with male/female emancipation as it uses archetypical gender roles and the prejudice that lies within those roles, subtle symbolism, especially the fabulous scene where Dr. Sayer walks into the crotch of a giant statue of a woman lying on her back only to have razor sharp sliding doors slam shut behind him in a monstrous Vagina Dentate. Once the doors open, only Sayers skeleton remains… Make what you want of it, but it’s a marvellous scene.

The Sculpture - Installation ”Hon-en Katedral” (literally she-a cathedral) by the artist collective Niki de Saint Phalle / Jean Tinguely / Per Olof Ultvedt was re-produced for the movie, as the original once stood at Moderna Museet in Stockholm in 1966. After entering the giant sculpture through the vagina visitors could enjoy a cinema, a rollercoaster ride, gaze upon a goldfish pond or buy soda from a vending machine. Now that should give you an impression of size! 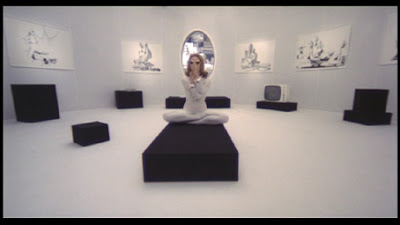 As you may recall from my bit on Luciano Ercoli’s The Forbidden Photographs of a Lady Above Suspicion, Dagmar Lassander never really made an imprint on me in any of her movies, (even though she was in two Fulci movies and that first tickling Ercoli Giallo) but this is possibly one of the exceptions, as she really makes this movie work and her acting is top notch as she slowly shifts from victim to perpetrator. She really sells the part perfectly, and instead of the regular “Oh I’m in Shock!” face, she actually manages to act with her facial expressions here too. She is fully believable as she curiously sets foot into Dr. Sayers world, terrified as he starts to enslave and break her down, flirtatious and sexy as she gives in to his plan, only to set her own in motion and stand victorious and content after her triumph. Once again this transition and performance is what sells the shift into a feminist theory discussion held above.

This edition claims to be a restored version, and for a change it’s not a marketing trick (which the UNCUT – UNRATED stamps usually signal to me when I’m choosing editions to buy), as the team at Shameless with the use of a varied bin of source materials, and constant dialogue with director Piero Schivazappa. This all led up to their screening for him, where he held with script in hand, later responded; “It is as faithful as it can be to the original script”, “This IS the version of my film to watch.” Once again Shameless bring a fascinating movie back to the intended vision of the filmmakers and make it available for fans of the genre after a painstaking labour of love is presented.

The customary assortment of Trailers for other titles available from Shameless: Tonino Valerii’s My Dear Killer, Corrado Farina’s Baba Yaga (which Shamless also restored to HIS vision of the movie, not the butchered version available previously), Lucio Fulci’s Black Cat, Guiliano Carnimeno’s RatMan, and both of Massimo Dallamano’s Venus in Furs, and What Have They Done to Your Daughters. There’s also the Shameless Redux trailer for The Frightened Woman, but below I give you the original grindhouse trailer for your entertainment.