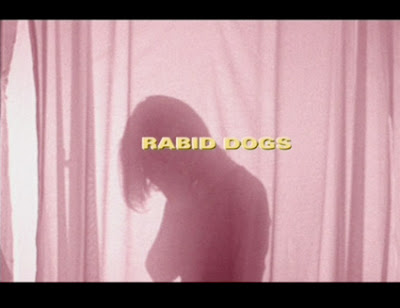 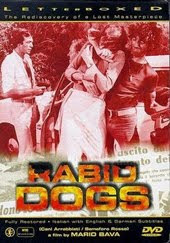 Of all the movies Mario Bava directed, this shelved, “lost” movie is ironically enough one of my top five Bava flicks. Sure his early Gialli are great, his Euro Goth flicks, filled with those masterful compositions and vivid colour schemes too, and who can forget the pulp-cool classics Planet of the Vampires 1965 and Danger Diabolik 1968. (Which make up two more on that top five list!) It’s all great stuff! If you still don't know of Mario Bava, then you really need to get away from your computer screen and in front of your DVD to check him out NOW! Bava's movies definitely are among some of the best looking movies ever to come out of Italy, all due to his passionate love of cinematography, lighting and composition. Looking back at his cinematic legacy I definitely feel that this "lost" movie is of his most engaging films ever directed, and it packs an ending so unexpected that it will startle you. 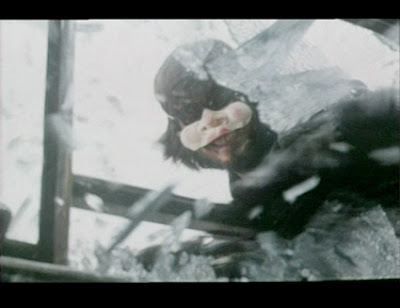 It’s said that Rabid Dogs became the long lost masterpiece since the movie was shelved and hidden away in the vaults after that producer Roberto Loyola died. Well that’s not quite true, it was shelved and somewhat forgotten for decades, but Loyola didn’t die, he went bankrupt, hence his movies being seized and locked in the vaults, along with a decent number of other movies too.

Several years later, in 1996, Lea Lander (Maria in the movie) somehow obtained rights to several movies thought long to be lost, and with the assistance of a young genre lover Peter Blumenstock, who you may remember released those great Beat at Cinecitta albums back in the late nineties on his Lucertola label, did all they could to get this wonderful piece of film back in the public eye. Blumenstock managed to secure the DVD rights - a very bold thing to do for a young cineaste as this still was the early days of Digital Versatile Disc, and there was no real market for Italian genre pieces like this one at the time. Well there obviously was, even if very limited. But who dare’s wins right! Back in the seventies Lander was the girlfriend of an elderly German gentleman whom invested in the movie on the terms that she was given the lead role in the movie. As Bava had worked with Lander previously on Blood and Black Lace 1964, he accepted the offer, luckily for us today!

Through his Luccertola lable, Blumenstock released the movie and in a splendid way DVD history was made as this movie definitely opened the floodgates for further genre title releases. 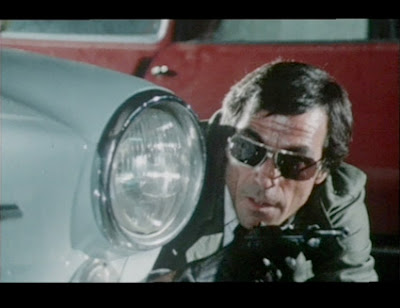 A few years on, Mario Bava’s son, Lamberto Bava - a director in his own, and long time Bava producer Alfredo Leone, purchased the rights, re-cut and shot new scenes for Rabid Dogs according to notes left by the late Bava putting together what is referred to as the definitive version of the movie now released under the name Kidnapped. Obviously this disc is a must for Bava fan’s that need to have all his movies, but in my opinion, the Rabid Dogs version is the one to hold, as this stays the closest to the material available when it was shelved, apart from the tinted title-sequence featuring Blumenstock’s girlfriend at the time weeping behind a curtain.(But given the chance to hear Tim Lucas discuss this movie on a commentary track, makes the Anchor Bay edtion very attractive too.) There’s something uncanny and disturbing when you try to tail footage shot some THIRTY years later on to a movie like this. Just remember how god-awful the Special Edition of Night of the Living Dead 1968 was when they inserted a load of new bullshit into that movie. That’s one limited edition disc which only got played once before it was instantly sold further at the second hand film store. You don’t mess around with a classic!

The action kicks in straight away as we are literally thrown inside a mans car as drives it rapidly down the road, honking his horn, and looking at something in the back seat, and checking his watch. We will later learn that this man is Riccardo [Riccardo Cucciolla] A delicate edit from Riccardo’s watch to Doc’s [Maurice Poli] watch where he is faking engine trouble as he waits for a designated car to pass by. The car passes and Doc jumps into his car where three other gang members are waiting. They follow the car in front of them and as it pulls up in front of a building, they rush out with their weapons drawn and as Thirtytwo [George Eastman as Luigi Montefiori] lets out a burst of shots, Doc flinches, which perhaps could be interpreted that he is not the most prone to violence of the four, making it clear that he’s the brains, “they” are the muscle. A third gang member Blade [Don Backy as Aldo Caponi] rushes up to the car, grabbing the briefcase from the man in the cars grasp. But not before stabbing him to death with a huge stiletto knife. The cops are closing in, the gang return to their getaway car, and set off only to have their perfect escape shattered as security guards at the building shoot their driver, and also puncture the gas tank (no, this isn’t an American movie, so the car doesn’t explode in an inferno of flames.) Obviously the car chokes to a halt a short while later and the now group of three bail out seeking refuge in a parking lot as the cops start sealing off the exits. Again we see shots of Riccardo driving through the traffic, glancing over his shoulder at the object in the back seat. Meanwhile back in the parking lot standoff, Blade once again gets active with his stiletto and kills one of the two women they now have taken hostage. Repelled in shock the Cops back off as the villains shove themselves into a new car taking the surviving female, Maria [Lea Lander] with them. 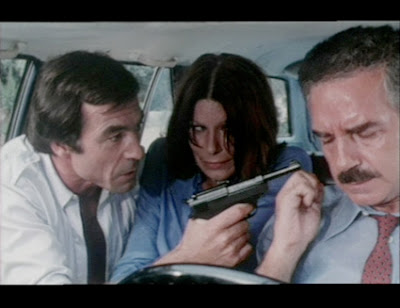 By coincidence they come upon a traffic light and in a cunning move to ditch their getaway car and shake off the cops the mobsters all stumble into the car at the red light… It’s no real shock that we find Ricardo behind the wheel, and he is now yet another of their hostages. And the bundle in the back seat? It’s a kid, a sick kid that Riccardo says he’s taking to the hospital. All of this in the first twelve minutes, gives you a concept of how fast this movie rolls.

The band of characters take off for the countryside, Doc says to Riccardo that they will let him take the kid, Tino o the hospital when they are safe. At the same time Blade and Thirtytwo make moves and provocative suggestions towards Maria. This adds to the tension along with the police helicopters swishing over head, police motorcycles driving past, the traffic jams and the toll booths that they have to get though without being bust or exposed by their kidnap victims. Several opportunities for escape are given for both Maria and Riccardo, and when Maria manages to make a run for it she ends up being chased by the manic Blade and Thirtytwo. Eastman by the way, is completely radiant here as the psychopathic and sadistic Thirtytwo, possibly his best villain ever in my opinion. Needless to say the two thugs catch up with her and Maria learns the hard way what it’s like to be a woman on the wrong side of a gritty, Italian exploitation flick. Back in the car their journey across the country via torment and paranoia continues. Riccardo tends and pleads for the child, and constantly battles Doc for the role of dominating male in the confined space. 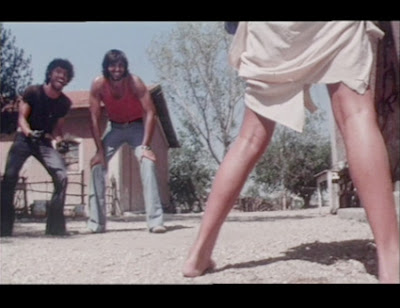 Finally the tension cracks, the floodgates burst open, the anxiety within the group brings it all crashing down, and in the final reel you will find out why Riccardo is the coldest sonofabitch of them all. Once you think the movie has ended it turns out that it really has just begun.

Claustrophobia plays a large part in Rabid Dogs, as the majority of the action takes place inside the moving car. In many ways you could imagine Last house on the Left trapped in a moving car! There’s nowhere to go but forward, and your every move is scrutinized by doped up maniacs who don’t flinch to whip out their stilettos and slice a serious gash in your body. Then add the finer details, like the abundance of master shots, it’s all half’s, close up’s or extreme close-ups leaving no space to breath within the frame. As the majority of the film takes place inside the moving car where the heat almost can be felt, the sour stench of the constant sweating people in the car smelled, it is a very enticing movie indeed. Set Stelvio Cipriani’s haunting score to that, and you have nerve wrecking tension at it’s finest.

Rabid Dogs is ferocious to say the least. It is dark, it's gritty, it's pessimistic and highly nihilistic. It lacks most of the arty tenderness and gentle flow associated with Bava’s previous works but instead holds a more in your face harsh gritty documentary tone. If his previous movies where delicate bandages, this one is the oozing scab you can't stop picking at no matter how much it stings and burns. And that’s a good thing, as Bava took a step away from his previous lush looking movies to create this real gem of grindhouse cinema. Never the less it did stay on the shelf for almost twenty years making it mature with time like a good wine.

Being mastered primarily from various sources, the print looks thereafter too, but keep in mind, when this edition was released it was the only way to see the movie. In later years several other releases have been digitally re-mastered and therefore hold better image quality. Although the Anchor Bay version of Rabid Dogs released in 2007, does have an audio commentary track by Tim Lucas of Video Watchdog, (the magazine which any self respecting cineast will read with a passion) and if there is one person in the word who is the official go to guy when it comes to Mario Bava, you go to Tim Lucas. Period. If you are not familiar with his gigantic study and documentation of Bava [Mario Bava – All the Colors of the Dark] they I pity you, and advise you to seek it out before you do anything else.

A trailer for the Luccertola DVD releases, Filmographies, and essays on Mario Bava by the masterful Tim Lucas, a study of the restoration by Peter Blumenstock.