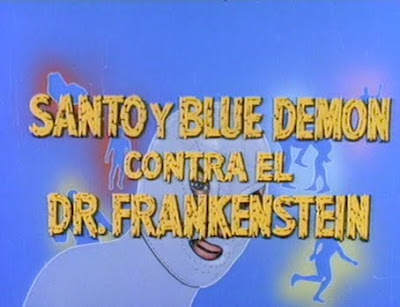 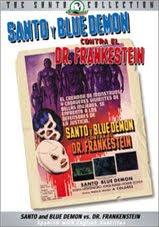 Distributed by: Rise Above Entertainment.

Every country has their own little niche that works its way into its national cinematic heritage in one way or another. The UK has it’s gritty working-class realism, Sweden has it’s obligatory skinny-dipping flicks of the sixties and Swedish Sin of the seventies, Finnish cinema has that wonderful drinking in silence whilst in the sauna melancholy, the Germans have their strict global angst, Italy has the wild twisted world of their Spaghetti remakes, Brazil has the surrealism of Coffin Joe, Japan has the wonderful mayhem of Godzilla, and the Mexicans have El Santo! 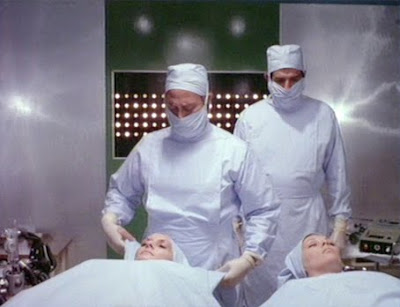 Young girls are going astray, and the cops are clueless in front of the many reported missing persons. The mastermind behind all the kidnappings, Dr. Irving Frankenstein [Jorge Russek] is trying to transplant a human brain into a young female body so that he can bring his wife back to life after he put her on "ice" eighty years ago to prevent a disease in her brain killing her. Yeah eighty years ago. His failed experiments roam the streets, often returning to their loved ones and killing them! The mad professor, not only a Frankenstein by name, but also the grandchild of the legendary Victor Frankenstein, has also invented an amazing regeneration potion that keeps him young until he's managed to transplant the brain with out the unfortunate streak of errors that have been tormenting his research. You would think that the youth potion would be enough to keep him happy, but nay, this potion is only used for his sinister uses. His love for the ice cold wife, and lust for reunification drives him into dark territory and the potion is only a tool to reach his goal. For some strange, unexplained reason wants to transplant Lucha Libre superstar El Santo's brain into his latest creature Wrestler fiend Mortis, but before that he has his foul henchmen kidnap El Santo's scientist girlfriend to lure him right into the trap. Obviously El Santo’s tag team mate (at least in the movies) Blue Demon comes to El Santo's aid as they dropkick and slam dunk their way through Frankenstein's thugs in their quest to rescue the girlfriend before annihilating and de-masking Dr Frankenstein’s and his fiendish monster in a grand wrestle-fest up on the rafters of the arena. 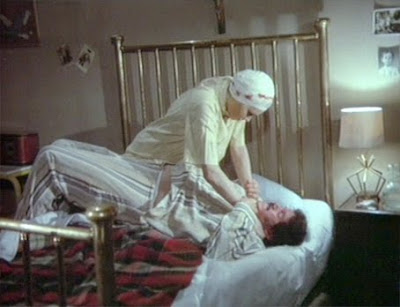 Santo & Blue Demon vs. Doctor Frankenstein is a great movie. It’s one of those wonderful pieces of world cinema that, like many other Santo movies, can easily help the most tedious hours of the night just sweep by. Just sit down and enjoy the show; bizarre stories, weird scenes, illogical narrative, crap acting, poor sets, and not so special effects make this a great way to waste an hour and a half, but for the love of god, it's EL SANTO and that makes up for a lot. You don't watch Godzilla movies for the dialogue and plot do you? You just want to see that 50Ft tyrant cause mayhem and kick ass, just like you want to see Santo pile drive the antagonists into the floor rescuing a few cute Latinas on the way and grooving out to those grinding scores by Gustao Cesar Carrión don’t you! In some ways you could think of Santo & Blue Demon vs. Doctor Frankenstein as an obscure Mexican cocktail of James Whale's 1931 classic Frankenstein, Franju's Eyes Without A Face 1960, Jess Franco's The Awfull Dr. Orloff 1962 and Faceless 1987 with a fair amount of Wrestlemania chucked in to add to the action scenes. Absolutely Stunning in other words! 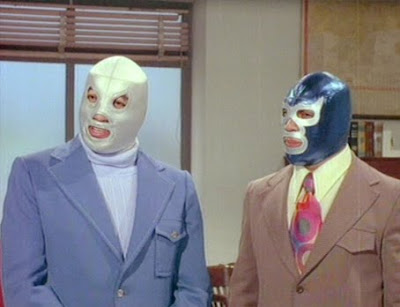 Director Miguel M. Delgado directed an impressive amount of movies, somewhere close to 160 films in almost every genre that was in demand. Mostly comedies and dramas where his big passion, but he did direct some of the more memorable Santo movies too; Santo vs. Frankenstein’s Daughter 1972, Santo and Blue Demon vs. Dracula and the Wolfman 1973, Vengeance of the Crying Woman and this one, Santo & Blue Demon vs. Doctor Frankenstein, both 1974. As you see many of the movies utilise good old fantastic elements and on more than one occasion, even outside the few Delgado titles, El Santo went up against foes from the classic gothic world, made famous by all those Universal horrors of the thirties… Two things come to mind, first the political subtext of a national hero conquering the iconic American monsters; second the brilliance of using already established protagonists. The characters Frankenstein, Dracula, The Mummy and The Wolfman, need no explanation as everyone knows how evil and bad they are which let’s the story kick right in and El Santo can get to work beating the crap out of the villains. 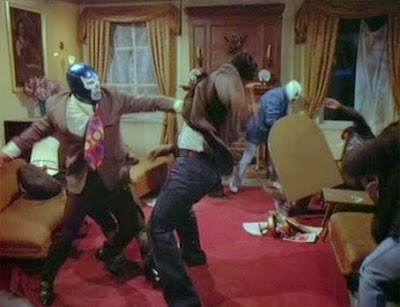 Most of the Santo films hold the same narrative form as those fabulous Godzilla movies. Present a problem, send in Santo/Godzilla, overcome some obstacles, and solve the problem. Nice and easy, grateful matinee entertainment for the whole family. But it is fair to say that the movies are perhaps not the primary thing of concern in this strange niche. What I find the most fascinating is that real life Lucha Libre star Rodolfo Guzmán Huerta portrayed the masked hero “THE SAINT” in fifty-four Mexican Wrestlemania movies. He took on Evil Brains, Zombies, Vampire women, Martian invasions, Dracula, Frankenstein, Mummies, Aztec Women, Karate Killer, Death, Wolf Women, and even the Bermuda Triangle. 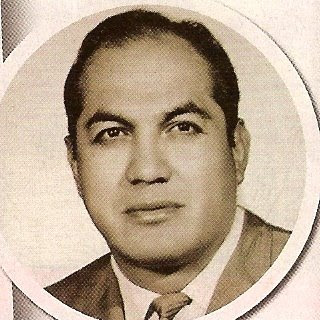 Back in the thirties, at the start of his Lucha Libre career after, Huerta wrestled as one of the bad guys before making the choice to wrestle on the good side. Having stepped over to the good side, this is where he stayed for the next fifty years. During the early forties, Huerta was offered a part in the silver masked wrestling team, and offered the part of The Devil, The Angel or The Saint, Huerta made the choice to be The Saint, El Santo.

1952 was a big year in Santo’s now legendary life. The magnificent wrestling trio spawned it’s own comic book, the first Lucha Libre movie to star El Santo was announced (although Santo turned down the opportunity to appear in the movie because of his fear that the movie would bomb) and he had his first bout against another superstar of the ring, Blue Demon. Going up against the Los Hermandos Shadow tag team consisting of Black Shadow and Blue Demon proved a terrible mistake as after El Santo beat and unmasked Black Shadow, Blue Demon in a rage of fury wrestled El Santo to the ground defeating the long reining champion. This defeat ignited a rivalry that never ended, and until the end of his career El Santo remembered his humiliating defeat by Blue Demon. Outside the ring, in the wonderful world of cinema, it’s quite obvious that the two characters put their indifferences and feud to one side as movie makers couldn’t resist the prosperity of bringing the two most popular Lucha Libre stars together in their action packed narratives. Just like his fellow wrestler, Blue Demon, or Alejandro Muñoz Moreno as he was called underneath the mask also took the step into movies, but nowhere near as many as El Santo. 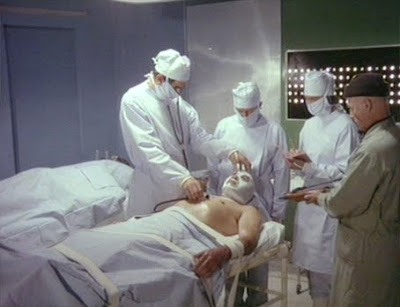 A few years later, in 1958, Santo made his screen debut with the two flicks The Evil Brain (El Cerebro del Mal) 1961 and The Infernal Men (Hombres Infernales) 1961, although Santo was not the leading star, he was more of a superhero side kick to El Incognito, and as Huerta had feared, the movies did miserably, even though they later where retitled to Santo vs. The Infernal Men. Although this was soon to change in 1961 when Santo took top billing for real and starred in Benito Alazraki’s Santo vs. the Zombies (Santo Contra los Zombis) 1962. The rest is what we refer to as history, Huerta went on to star in over fifty more Santo movies, both as a single hero taking on foes and in tag team combo’s with Blue Demon, and still today years after his retirement El Santo is paid tribute to as the pop-culture icon he is. Cartoons, Comics, Animated serial’s Rock’n’roll bands and who can forget that Turkish gem Three Mighty Men (3 dev adam) from 1973 directed by T. Fikret Uçak where Captain America and El Santo team up in a bizarre twist to fight off a villainous Spiderman. Wild stuff and definitely a must see if you have missed it. (It is still available on limited release from Onar Films webpage) 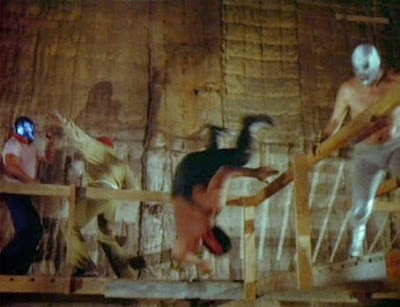 Late 1982 Huerta decided that it was time to step down El Santo’s activities in the ring and announced that it would be Santo’s last season in the ring. In the final brawl El Santo conquered ALL his opponents in the ring and retired the anonymous masked hero that the public had loved for so long on both the silver screen and the packed sports arenas of Mexico. During an appearance on the Mexican TV Show Contrapunto, Huerta surprisingly removed his mask revealing the true face of the masked hero once and for all. An action reserved for conquered Lucha Libre actors, the de-masking was definitive statement that Santo was retired once and for all. On the 5th of February 1984, merely a week later Rodolfo Guzmán Huerta died from a heart attack. Just as Bela Lugosi always was and will be Dracula, Huerta identified so strongly with his beloved character that his last request was to be buried wearing his infamous mask, the silver saint.

So now that you know the impressive story of Rodolfo Guzmán Huerta and the legacy that is Santo, I recommend that you seek out one of the many movies and spend an evening in the company of a legend larger than life. VIVA EL SANTO! 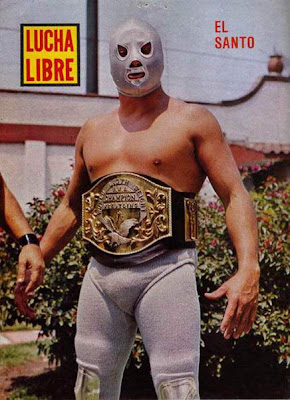 Extras: The Best of El Santo - a two-minute reel of highlights from various Santo movies, Santo Collection Trailers, and a wonderful photo gallery

Excellent review and lots of Santo info here. Keep it up. Good stuff.