She Killed in Ecstasy 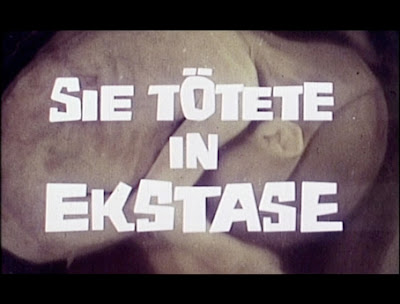 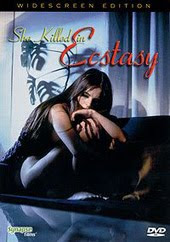 I get the feeling that every Jesus Franco DVD released contains the ”Franco’s finest film” on the shallow synopsis on the back of the cover. Quite possibly it’s true, as Franco certainly is an eccentric jack-of-all-trades who goes with the flow, working with a multitude of producers and almost reinventing his style for each collection of titles directed for the various production houses. It is an impressive amount of movies he's churned out, and when financed appropriately by the varied producers he's come up with some classic movies. Some gave him larger means, other lesser, but Franco always makes the most of it and gives his best to deliver what is expected. 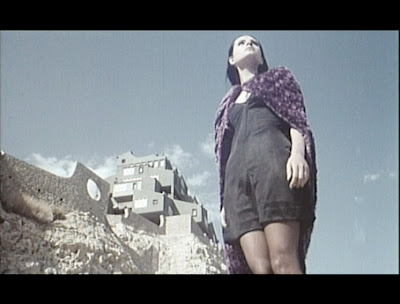 She Killed in Ecstasy is a pretty straightforward movie during its 73 minutes and continuous zooming in and out of the compositions, as the beautiful Soledad Miranda [here billed as Susann Korda – who starred in eight of Franco’s movies] who is happily married to Dr. Johnson [Fred Williams – also a Franco regular]. But after Johnson’s research and experiments on human embryo’s is rejected and he’s exiled from the medicinal world, he goes insane, finally committing suicide… The grief ridden Mrs. Johnson goes on a killing spree to make the committee responsible for her husband's death pay with their lives. The committee, a bunch of Franco regulars, consisting of Professor Jonathan Walker, [Howard Vernon], Dr. Franklin Houston [Paul Muller], Dr. Crawford [Ewa Strömberg – a Swedish actress who started out in Pippi Långstrump director Olle Hellbom’s 1959 classic Raggare! and also starred in Arne Mattsson’s fantastic Mördaren – En Helt Vanlig Person 1967] and Dr. Donnen [Franco himself]. Mrs. Johnson stalks, seduces and kills all four of them and for good measures Franco has thrown in Horst Tappert as the police inspector not only investigating the death of Mr. Johnson, but also the killings of the other doctors. But it’s not much of an investigation as he merely participates in a few scenes, not really giving the impression of investigating at all, but asking the question: "What kind of maniac would commit these kinds of murders?" Just in case we hadn’t grasped that Mrs. Johnson was crazy. 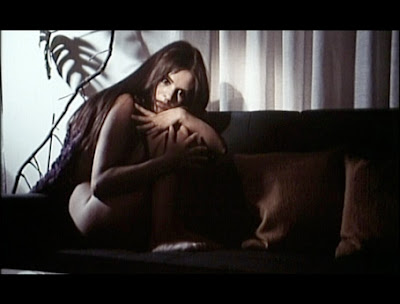 Soledad, flirts, seduces and kills her way through the lot of them, in a rather dull fashion, apart from the murder of Dr. Crawford who she first enjoys a little lesbian flirt and romp with before killing with a plastic see through cushion. A great little scene as the camera stays in a master shot only to intercut the close-ups of Strömberg suffocating through the plastic. Finally Mrs. Johnson’s work is done, and she is reunited with her dead hubby in death as she drives her car over a cliff… an profoundly ironic scene as the seductive and tender Soledad Miranda herself would die all to young in a tragic car accident herself in 1970. 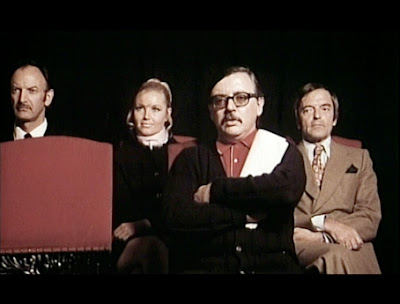 She Killed In Ecstasy is one of the more familiar movies of Franco’s, possibly because he claims Miranda’s performance to be one of his own personal faves. Strangely Franco, just like Amanda de Ossorio, supposedly doesn’t like his own movies at all. It’s sad, because there are a few gems in there. Unfortunately She Killed in Ecstasy is a shambles of a movie, almost completely lacking of suspense, filled with terrible zooms back and forth, poor editing, corny dialogue, really lame scenes of seduction and sex scenes that are about as erotic as taking the trash out, but it does have a great soundtrack and Soledad Miranda. 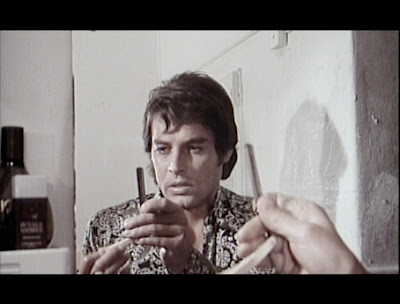 She Killed in Ecstasy is more or less a reworking of one of his previous movies: The Diabolical Dr. Z 1965 based on a novel by David Kuhne, which for the uninitiated is one of Franco’s several pseudonym names. Although Franco in his turn probably based The Diabolical Dr. Z, or the much more attractive original title Miss Muerte on Cornell Woolrich’s novel the Bride Wore Black which also sees a young woman track down a bunch of strangers and kill them one by one after they accidently killed her husband.
Woolrich’s novels have provided inspiration for several others during the years, Rendezvous in Black provided the basis for Umberto Lenzi’s fascinating Giallo Seven Blood-Stained Orchids 1972, The Bride Wore Black for Francois Truffaut’s 1968 film of the same name and It Had to be Murder for Alfred Hitchcock’s Rear Window 1954. 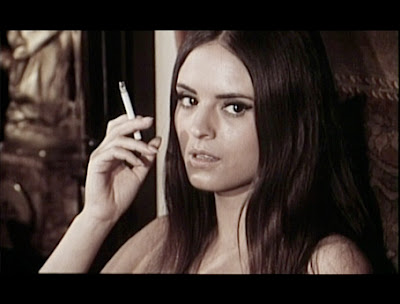 Reusing previous successful plots is also a frequent Franco attribute, his breakthrough feature, The Awful Dr. Orloff 1962, uses the template - mad scientist attempting to recreate his wife/girlfriend/lovers disfigured face with the faces of innocent victims, loosely based on Franju’s Eyes Without a Face 1960, and acted as the stencil for many of his films including the terrific Faceless 1987, and the wife/girlfriend/lover out for revenge after a death of a loved one was also one of his key models to work from. 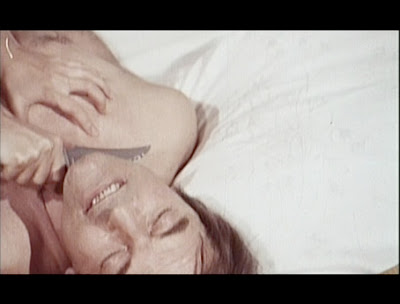 In all honesty it’s easy to list the personal favourite dozen of good movies over the almost two hundred movies he’s directed, but it’s almost impossible to write that list of the ”best” Franco titles without offending other fans of the man, as the beauty of Franco is in the eye of the beholder, be it the surrealism, the eroticism, the nudity, the many muses, the period pieces, the sado/masochistic decadence, the imagery, or simply the fantastic jazzy, funky soundtracks that propelled the movies forth. Soundtracks that Franco, a highly talented musician too, often played on himself.
Each fan of the remarkable Jesus Franco has their own little niches of Francomania that they prefer. I know mine and you probably know yours! 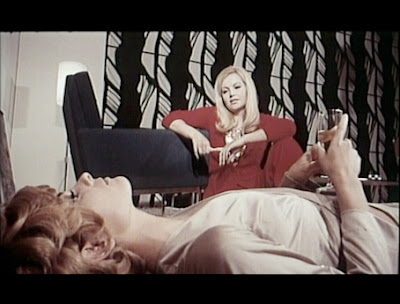 But even with the low percentage of decent films of choice, you have to respect Franco, he filmed, edited, scored, wrote, directed, produced to keep the movies coming, and I find that in even the shittiest of his productions there’s always that one little nugget; a scene or a image, or a glimpse of magic that makes it all worth while. This is what lays the foundation for my complex relationship to him and his movies. At one point in time I had somewhere close to ninety Franco movies on VHS (I used to work in two video store’s, one a shop that rented out UK imports, and the other that concentrated on imports from Holland, Greece, Germany, Japan, Usa etc, so there was always a new Franco film on the shelves to watch. Which reminds me, one of our customers was such a Franco buff that he went to Spain, found Franco and became involved in several of his films during 2001 – 2005, acting, editing and filming you name it. I still think that Peter is one of the coolest mohtherfuckers ever for actually making that happen in his life.) Anyhow, I used to watch so many of his movies that just fell right out of the VCR into the voids of oblivion. But some of them had that one damned little sparkle that made them worth hanging onto. On one occasion, I think it was the 1983 flick Cries of Pleasure that was incredibly tedious and slow, but then suddenly, during a Franco mandatory lesbian makout scene, this one on a boat, the camera circled the boat two or three times (obviously making the most out of the shot), and the ocean surrounding the boat is still completely blank. That one little scene surprised the heck out of me; it got me excited, engaged, and enthusiastic. (The movie didn’t get any better after that scene though.) I couldn’t for the life of me understand how he’d managed that shot. I’ve seen and shot enough helicopter scenes of my own to know that the rotors of the chopper at that distance would have had water spraying all over the place, the shot couldn’t have been taken from a second boat as the rest of the ocean still was crystal blank. I started imagining some sort of pole extended from the mast with the camera attached to that spun round the boat, filming the minge munching actresses, and that’s still how I think he pulled it off. By using his creativity and coming up with something that his tight budget wouldn't have allowed him to do. And that’s Franco in a nutshell, which also leads to one of the most persistent rumours and comments that people will state when mentioning his name – Franco the zoom king. 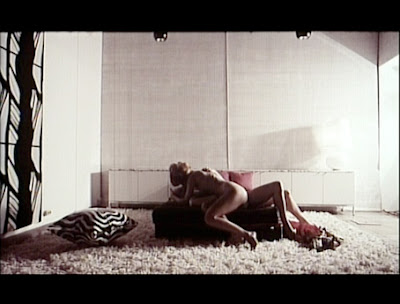 Actually Franco didn’t really use the zoom as much as one would think, but during certain time periods, and due to tight budgets, zooming in and out of faces, items and scenes made the need for counter shots and cut always unnecessary, less set-ups where needed and valuable time was saved. 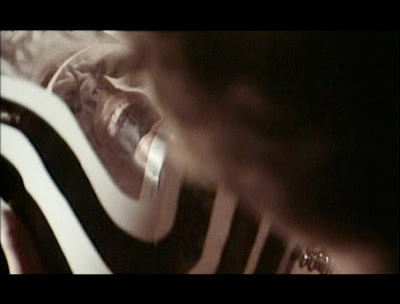 Such was the case with the films Franco directed for German producer Artur Brauner, tight budgets, forced Franco into situations where to make the most out of the movie relied of the zoom gimmick and reusing most of the casts from previous movies he’d directed there.
That’s why you almost have all the ensemble from Vampyros Lesbos 1971, The Devil Came From Akasava 1971 returning in She Killed in Ecstasy, which by the way was one of the four films Franco directed in 1971 - X312 – Flight to Hell being the fourth. 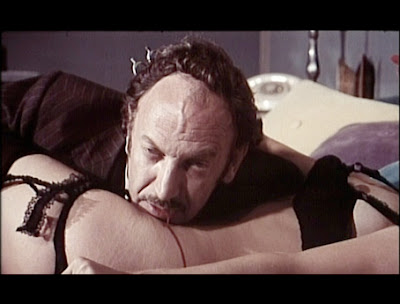 The movies of this time period also saw Franco collaborating with musicians Manfred Hübler and Siegfried Schwab, who worked with him on She Killed in Ecstasy, Vampyros Lesbos and The Devil Came from Akasva. The result - three fantastic soundtracks that still are enjoyable today, and where featured in Quentin Tarantino’s Jackie Brown 1997. Filled of psychedelic, sitar/funk/jazz they are truly three amazing soundtracks that are possibly the best thing about the movies of this period. If you are lucky you can still get your hands on the limited release 3 Films by Jess Franco CD released by Lucertola Media back in 1995 – it will perk any party, that is for sure. 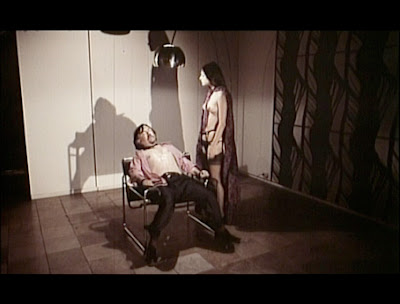 So you have to hand it to the guy, as Franco has directed an impressive amount of movies, worked with Orson Welles after he was highly impressed with Franco’s craftsmanship, was requested to come visit Buñuel after the two of them where declared the most dangerous filmmakers by the Catholic Church, has a reputation for staying within budget and keeping his projects on time, and during the glorious eighties had three films on the infamous Video Nasties list in the UK and to finally recognize his importance, he was rewarded with the Goya (Spanish Academy Awards) Lifetime Achievement Award last year for his contributions to celluloid history. 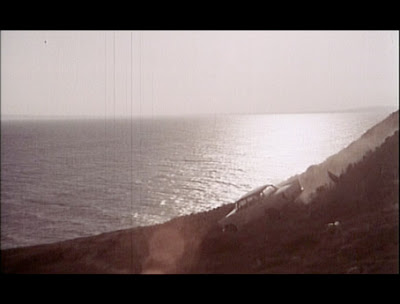 Image:
1.66:1
Audio:
German dialogue, English subtitles optional
Extras:
There really should be a re-release of this title to flesh out the extras because the only thing the disc offers is the original theatrical trailer.
Here's some of that great soundtrack for you, and a suave six minute version of the flick.
- December 25, 2009

Great text by the way!

Sure. It's one of my favourite Mattson-Allan Edwall movies. I often toy with the idea of re-writing that sucker and making it a play for the stage! That would be massive.