I'm a Cyborg, but that's OK 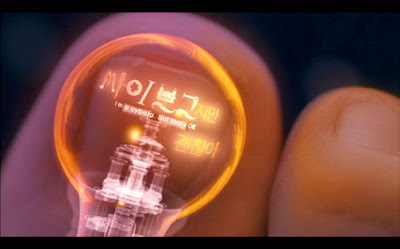 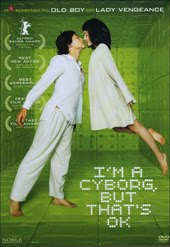 I’ve always enjoyed Asian cinema as they frequently seem to act as refreshment within the genres that have grown cold, bringing inspirational new approaches to stuff with them. Or when old same same gets tedious, their contemporary scene is often full of high-speed pulse just waiting for us to discover it and their legacy. The Action flicks of the eighties found new fan with the ballet bullet’s of John Woo, the horror genre which was refuelled by the movies of the J-Horror genre and Takashi Miikes extreme blends of the two genres. Needless to say after being a long time fan of Japanese and Hong-Kong flicks, I was profoundly enthusiastic when the South Korean genre pieces also started to get some recognition, and became more accessible to fans of alternative cinema. And what an amazing treasure of contemporary filmmaking they brought with them. 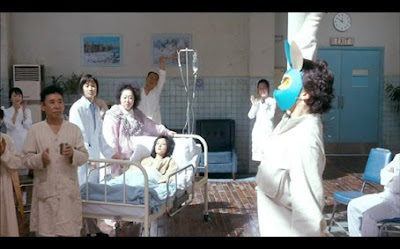 You don’t need to be a brain surgeon to understand that among the exciting directors that where brought forth, I found myself attracted to the movies of Kim Ki-duk and perhaps the most to Chan-wook Park.
Park has time and time again proven that he is an extremely talented director, with knowledge of complex storytelling, dark subject matters, twisted storylines, and stunning visuals –and if you know this blog, and me you know that I’m a sucker for great visual compositions.
So I was obviously curious to sit down and see his take on the so-called rom-com genre before I set my sights on the vampire drama Thirst 2009. 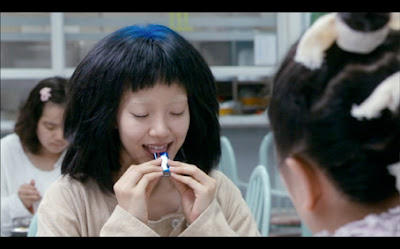 I’m a Cyborg, but that’s OK tells the story of two young kids who both are living in a mental institute for separate reasons. Cha young-goon [Su-jeong Lim - Ji-woon Kim’s A Tale of Two Sisters 2003] is a teenage girl who is institutionalised after she slits her wrists, jams electrical wires in her veins, and plugs herself into the socket during her work at the radio assembly line. We soon learn that Young-goon also cracked when her beloved grandmother also was sent to an asylum because she thought she was a rabbit, and this separation ignited Young-goons idea that she may in fact be a Cyborg. Inside the asylum she meets a whole bunch of other characters, where Park Il-sun [Rain also seen in James McTiegue’s Ninja Assassin 2009, find out what that one's like at Ninja Dixon's excellent place.] soon captures her attention, and she his… 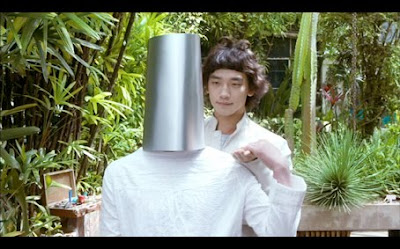 Il-Sun has a knack for stealing the other inmates “traits”, and more than often it’s traits that they are institutionalised for to start with. Young-goon, who thinks that she’s a Cyborg, is intent on taking revenge on the “white coats” as they represent the people that took her grandmother away. But her sense of pity inhibits her from claiming that vengeance. This is obviously where Il-sun comes into the picture, and after Young-goon persistently begs him to steal her pity he helps her out enabling the Cyborg within to step forth and complete her task…
I’m a Cyborg, but that OK is indeed a movie that could be called a rom-com, but make damned sure to keep in mind that it’s not a retarded one like many of the ones made by Hollywood studio’s, but instead an intelligent one that brings in serious drama along with the warm humour instead of going for laughs through cheap gags. It’s a great movie and definitely feels very much a part of the Park universe, as it uses the familiar Park traits that almost every one of his movies uses; loneliness, sadness and loss. Almost all his movies have used these themes as key ingredients, and even so I’m a Cyborg, but that’s OK. 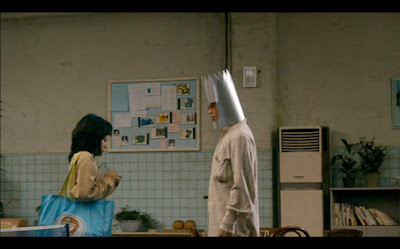 Both Young-goon and Il-sun have lost that which is closest to them in life. She her grandmother, he his birthmother. And it’s this loss that brings them towards each other through out the narrative. It’s also this loss that is resolved as the two of them finally connect at the very last scene of the movie. A friend who I mentioned that I was finally going to watch the movie too said that they had seen it and that it was a bad movie as it didn’t have a real ending. It just finishes abruptly. Well I’ll of write that off as ignorance and lack of understanding movies, as the movie certainly does come to an end. There is no more storyline to follow. Their paths have crossed, and finally joined. They have found their replacement for the persons they where missing throughout the movie. We have no need to see what happened to Il-sun and Young-goon do in the near future, as they obviously have found each other. Their search is over and they won’t ever be lonely again. 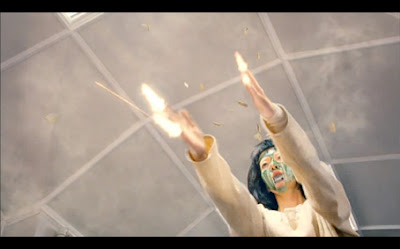 The acting is excellent, and both Su-jeong Lim and Rain give stunning performances as the two frail characters., and both received a number of awards for their portrayals. Park does some fantastic stuff within the narrative as he uses the patients mental illness to create some amazing scenes, Rain’s theft of others traits, Young-goon’s Cyborg shootouts, and her constant lack of power that has her licking batteries is excellent, and it’s all portrayed delicately and tenderly. It’s a wonderful ride, that definitely shows that Park can handle themes of serious manner within his trait sphere and at the same time bring a humorous tone to the same sphere creating a completely different kind of film than we are used to seeing him present. 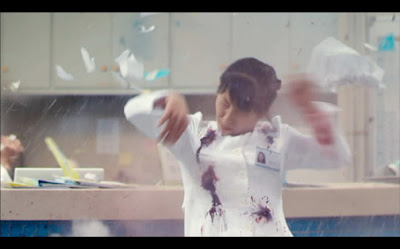 Colour schemes and contrast always play an important part in Park’s movies, in I’m A Cyborg, but that’s OK it’s the bright pastels tones that are set as contrasts to the bleak beige and khaki of the institution. There’s always something about the colours of his films that stand out and the movies look absolutely stunning. Chung-hoon Chung’s cinematography for the four films and one short [Old Boy 2003, Sympathy for Lady Vengeance 2005, I’m a Cyborg, but that’s OK 2006, Thirst 2009 and CUT, one third of Three Extremes 2004] are excellent pieces of art which also bring added value to watching a Park film. Not only are they terrific story wise, they also have beautiful cinematography and compositions. Written together with Seo-Gyeong Jeong, just like Lady Vengeance, and Thirst, there’s a more positive one working it’s way into the movies of Park. Sure all three movies have some pretty dark moments and themes, but there not as nihilistic as the brutal Sympathy for Mr Vengeance 2002, or the cynicism and punch in the face of Old Boy – which still is a really fucking awesome movie. It’s an interesting collaboration that leaves me wanting to see more from Park and Jeong. Their collaboration on I’m a Cyborg, but that’s OK won them the award for best screenplay at the 2007 Sitges Film Festival, and I’m quite positive that it won’t be the last award these two share. 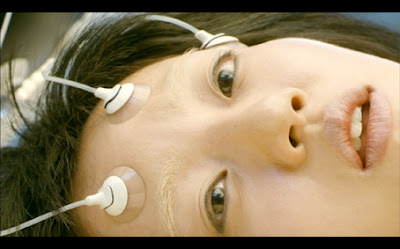 There’s one other item that ties all Chan-wook Park’s movies together, and it’s that there is always a Swedish connection or association in each movie. I have no clue at all to why, perhaps he has some association with this place, I don’t know, but there’s always a reference to the country in his movies. Strangely none of the Swedish journalists that have interviewed him have ever asked him about this, and I haven’t seen the topic discussed anywhere, but as a guy who’s been here for the past thirty years, I can see the references plain as day. Even Cyborg has these references, as Young-Goon hides in the clock in the hall and sings silent night, a song sung all day on Lucia, the 13th of December, each year in Sweden. With the other referents in mind I choose to see this as a clear Sweden signifier even if the song originates from Germany, if you have ever seen a Swedish Lucia celebration that is an impression that will stick with you. I’m quite convinced that there’s a connection somewhere in there and I’d love to ask him where and what… or if it’s just coincidence. 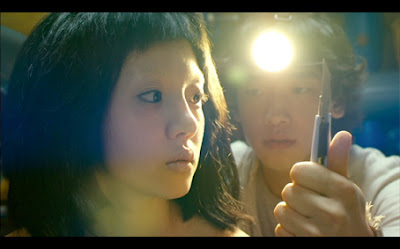 I’m a Cyborg, but that’s OK, is an amazing movie, warm, tender, gentle, but dark and sad at the same time. A must see for fans of Asian cinema that want to give something else a spin than the usual horror or action flicks. 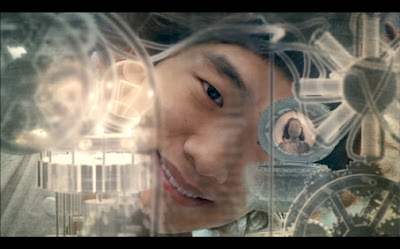