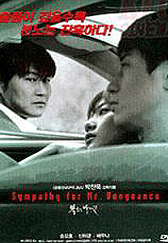 Story:
A young deaf man, Ryu [Ha-kyun Shin, from Park's previous movie, JSA], works hard hours at a factory. Most of his spare time is spent taking care of his ill sister [Ji-Eun Lim], who is in immediate need of a kidney transplant. Ryu goes to the extremes to help her. Together with his girlfriend Yu-Sun [Bo-Bae Han] they decide to kidnap the daughter of his boss Park Dong-Jin [Kang-ho Song, also from JSA] to finance his sisters needed operation. For a while this seems to be a good idea, but then things take an unexpected turn for the worst, and Mr. Park is out for vengeance.

Me:
This is one heavy movie to watch, to say the least. It's very dark, very violent, very emotional and very enthralling. There are some amazing scenes in this first instalment of Chan-wook Park's "vengeance trilogy". Early on before the main plot, the kidnapping kicks in, Ryu tries to donate one of his kidneys in return for cash to finance his sister's treatment, and is left for dead in an abandoned building site. This is the start of his "vengeance thread" (on the people who took his kidney) and then with the horrible death of the young victim, which really was hard to watch as it is done so "poetically" in lack of a better word to describe it. This is obviously what starts of Mr Park's vengeance thread. Park's search and destroy crusade to find the perpetrators is very convincing, as he simultaneously carries the overwhelming despair of loosing a child. Watching the movie there's no question why Chan-wook Park is quickly becoming one of those names to keep track of. The look of the movie is very much in key of the mood, bleak, washed out, and dark. The actors are brilliant, and always have a sense of remorse about themselves in all their bad deeds. There's no classic evil laughter as vengeance is served here.


Image:
Wonderfully shot on 35mm by Byeong-il Kim (who hasn't done much since), and printed on 3mm Anamorphic with a 2.35:1 aspect ratio the DVD is presented in a 2.28:1 Anamorphic widescreen print. It looks fantastic, and it's the best print I have seen on DVD so far. (Compared to the US/UK Tartan Video prints and the Scandinavian Asian Vision print)
The movie is subtitled in both Korean and English.

Audio:
No less than four audio options are given on this import disc; dts digital surround, 5.1 Dolby Digital and regular 2.0 digital surround. Also on the main disc, there is an audio commentary track by Chan-wook Park, alas it's in Korean and no subtitles are available for it.

Extras:
Happily there are a so much extras to round of this great movie that they are put on their own second disc. The International trailer, production notes with storyboards of two scenes. My Boksu Story which is cast featurettes, with the usual Q&A, and Staff interviews. Four cuts from the soundtrack with images from the movie. Finally the larger extra, In process of Mr. Vengeance, which breaks down into four smaller featurettes; Dactology, how Ha-kyun Shin and Bo-Bae Han learn how to use sign language for their roles. Star Review, where Kang-ho Song, Ha-kyun Shin and Bo-Bae Han talk about their characters, Special Makeup which obviously is about the FX of the film, Cameo Role focusing on Seung-beom Ryu's cameo as the retarded man who lives by the river. Unfortunately this second disc full of extras isn't subtitled, so if you don't speak Korean, you'll just have to enjoy the footage instead.

Like I said, it is a hard movie to watch, but definitely something you should see if you like Asian drama / thrillers. It is a stunning piece of work, and I'd rate it as one of the best, if not the best, Asian movie of 2002.
- October 12, 2006