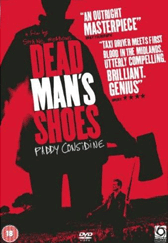 Story:
Set in the English Midlands, we find Richard [Paddy Considine], a soldier returning from him military service to get back on the gang thugs who have bullied his kid brother Anthony [Toby Kebbell]. The more he meets and confronts the gang the deeper into his own darkness he goes.

Me:
This is probably my absolute favourite movies of 2005. When I first saw it, it just blew me away completely. It's a tremendously powerful movie. The story is pretty straight forward, Richard returns to the small village they live in to claim revenge on the gang members who wronged his retarded brother. It's been done before like in Mike Hodges' Get Carter 1971, the older, more experienced brother returns to his origins to set things right. But the way Meadows builds this one up is really clever. The inter cutting of old "family" footage during the opening sequences just sets the tone so brilliant, it just gets into your subconscious right away and lodges itself in there. As the story unravels there's some obvious evolution to the relationship between the brothers, which helps to explain more of the psychological side of the tale. It's a great return to form for Meadow's who sort of vanished and was abandoned by his old mates after the big bucks, "too much people involved with too much to say project " - Once Upon a Time in the Midlands 2002. Going back to basics, with a small budget, small crew, small cast and doing it his own way with just his mates without big stars and studio influences, was the smartest thing he could have ever done to revitalise his career. The story which was written by Meadows, and lead actor Considine, could have easily become cheap exploitation flick set in the classic violent revenge horror genre, but Meadows stays clear of falling into these pit holes and keeps violence to an onscreen minimum, giving the actual violence that gets on screen a more powerful psychological effect. The actors, whom mostly are Meadows mates and bit part friends from previous movies, are great. There's a genuine regular Joe feel to all of the characters. Toby Kebbell is amazing as the retarded Anthony, Considine just slots nicely in there next to De Niro's Travis Bickle. The thugs work brilliantly too, they have just the right amount of street credibility and small time thug dorkiness to make it work, not forgetting Garry Stretch as the gang leader Sonny. It's a totally awesome performance. Last but not least I have to mention the soundtrack, Jesus, what a soundtrack, it plays like a greatest hits of Warp artists, and is still quite frequently on my top play lists. The music just fits so perfectly into the story, like after the Bonnie Prince Billy track A King At Night with it's "there is blood in my hands, from the murder of a man" lyrics just after the first confrontation with the gang. This is a fantastic movie, and every time I think about it I want to rush over to the DVD and watch it again.

Image:
Shot on 16mm (according to Imdb, but I'm sure that Meadows has stated he shot it on HighDef DV, the print is blown up to anamorphic 1.85:1 and the image is superb.

Audio:
The disc offers the choices of Dolby Digital 5.1, or 2.0 Stereo.

Extras:
There are quite a few extras on the disc; an audio commentary by Meadows, Considine and Producer Mark Herbert, where Meadows has to struggle through the last half-hour as Considine and Herbert obviously are getting restless, but its fun to hear, and he does his best to keep them on track. Deleted and extended scenes. A featurette about the movies premiere at the Glasgow Film Festival, a music video, an animation from the graphic novel, and the theatrical trailer. Also there is also a hidden extra, featuring outtakes from the commentary track, just proving the rough time they had trying to get it done. The best extra is the half hour short movie Northern Soul 2004, which sees Toby Kebbell once again in a great role as geekish want to be wrestler Mark Sherbet.

So yes it's definitely a highly recommended movie that everyone should watch as soon as possible.