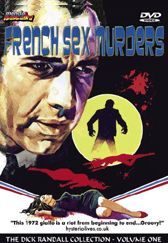 French Sex Murders
Aka; Murder in Paris, The Bogeyman & the French Murders, The Paris Sex Murders

Story:
Inspector Pontaine [Robert Sacchi], a Humphrey Bogart look-a-like detective investigates a series of strange murders that started with the killing of a prostitute at Madame Colette's [Anita Ekberg] bordello. Main suspect Antoine [Pietro Martellanza] is killed in a freak accident, but when Professor Waldemar [Howard Vernon] performs an autopsy into Antoine's brain, the killings continue in a weird and mysterious way.

Me:
Sweet and sleazy giallo, which doesn't quite make the push over hill and roll into the suave settings, music and atmosphere that most classic gialli capture in one way or another. Perhaps it's no mystery as this movie was produced by cheap-and-cheerful producer Dick Randall, who preferred more to make a few bucks than to make an impression. But there are a few things that stick out to make it a memorable movie even though comparing it to Gialli of the Italian standard exposes the flaws and makes it come off pretty weak. It all starts off promising with a chase up the Eiffel tower, and a leap to certain death before cutting back to the start of the violent tale to be told. From there on it just gets freakier and freakier, red herrings, sudden plot twists, killers being caught and escaping, prime suspects suddenly getting killed just to throw us off track once we have our minds made up of who could be the culprit, all the way up to the opening scenes again. The casting of Sacchi is so far out and brilliant that it makes the movie worth the while. Sacchi moves around in his trench coat and does a Bogart impression that makes the rest of the cast look great. But it's all a good laugh, what with Euro icons like Howard Vernon, Rosalbana Neri, Barbra Bouchet, and Anita Ekberg, cheesy special effects (even one eye gouging they claim to be a tribute to Buñuel's Un Chien Andalou), really lame acting, including a cameo appearance by Dick Randall as a sleazy sheik visiting the bordello, a Jazz club scene that could have been ripped right out of a Franco movie, and last but definitely not least, a rather decent Bruno Nicolai soundtrack make it a memorable movie you'll love trying to forget you ever saw!

Image:
Well it claims to be a new anamorphic 1.66:1 / 16:9 transfer, which it obviously is, but at some times you can see that it defiantly is a hybrid print [meaning that they have taken elements from several versions of the film to achieve the absolute version] as there are shifts in quality in some scenes, but not to worry there are worse examples of this out there on DVD. Some of the scenes feel to be a bit overexposed, but this could also be due to the hybrid print.

Audio:
Nothing too surprising, Dolby Digital, mono, but there are a few disturbances here and there, but once again, it's probably because of the hybrid print, and nothing that takes anything away from the film. There's no subtitle options as the print is the english dubbed version.

Extras:
Released as the first volume of the Dick Randall Collection, Mondo Macabro actually manage to pull this one of thanks to the fascinating extras. Where as they could have made things easy for themselves and reused the Documentary on Italian Gialli from their previous release for Ercoli's Death Walks at Midnight, they dedicate half an hour to the Wild Wild World of Dick Randall, an truly enjoyable half hour portraying Randall's wide and, truly wild career. There's an essay on the movie, including an explanation about the hybrid print, Mondo Macabro are regularly very frank and honest about their prints, which makes up for eventual disappointments in audio and visual faults in the movie. There are two deleted/alternate scenes with explanatory texts to why they where not included in the hybrid, a still gallery, and a great other titles from Mondo Macabro promo included on the disc.

Oh I love this film so much, yes it's hugely uneven, but the colours - they're amazing! I don't know why, it's not the most visually polished film, but that cinematography makes me ecstatic!

Oh I love this film so much, yes it's hugely uneven, but the colours - they're amazing! I don't know why, it's not the most visually polished film, but that cinematography makes me ecstatic!