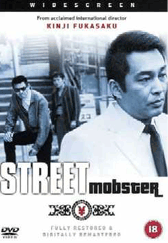 Story:
Isamu Okita [Bunta Sugawara, a Fukasaku regular] is young punk on the outside of the two main rival Yakuza gangs. His only real friends are a hooker, his pal from jail, and the few members of his gang. When a yakuza leader takes Okita and his gang in as part of their tribe, Okita starts to throw his weight around, and his total disrespect for tradition and honour, soon lands him in trouble.

Me:
Totally awesome movie. You can't really go wrong with Fukasaku's seventies Yakuza movie. They are loaded with fast paced action and kick-ass lead characters. The editing is fast paced, and the soundtrack is very jazzy, almost in the feel of an Ennio Morricone score. Bunta Sugawara, is great in the lead, his stone cold gaze, and sudden violent outbursts are top notch. His character is very much telling his own road to ruin as he narrates his violent life & times. He's set for doom right from the start; he's born on the same day that signed the surrender documents at the end of WW2! Watching this movie there's no doubt in mind that Fukasaku was a major influence on such directors like Takeshi Kitano, Takashi Miike and I'm positive that Tarantino watched his fair share of Fukasaku movies back in the video store he worked in way back in the day.

Image:
16:9 anamorphic widescreen. Eureka claim on the sleve that this is a fully restored and digitally remastered version, but I'm far from impressed. The print could have been much better. There's a lot of crawling in the image and the colours could be better, darks are greyish, reds are pinkish, there's not much crispiness to the image and everything looks faded. So unfortunately for the time being this version will have do. One day Criterion will run out of Kurosawa movies to release and hopefully they will realise Fukasaku's brilliance.

Audio:
Dolby Digital, mono. Nothing much to complain about.

Extras:
It's almost embarrassing to have optional English subtitles as an extra, but OK I can at least choose if I want them on or not. A biography on Fukasaku by Tom Mes of Midnight Eye, and a photo gallery consisting of approximately ten-twelve shots round off the few extras on the disc.

I'd love to find out that Scorsese and his crew had seen these movies before making his classic gangland movies of the seventies [Mean Streets 1973 & Taxi Driver 1976] There's so much parallels in these tales that it must be more than coincidence. Great movie and absolutely worth watching more than once, but hopefully with a decent remastered print instead of this cheapy feeling version.