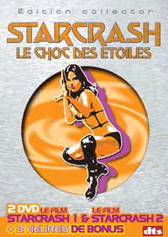 Me:
Well considering it’s made on the cheaper side and supposed to cash in on Vadim’s Barbarella 1968 and Lucas’ Star Wars 1977; it works kind of all right. Munroe finds herself in various tight small outfits as she ventures to different planets in the hunt for the Count’s evil planet. The movie is full of hilarious small details, like Elle the black “cowboy” robot who talks with a Texas accent, Stella’s companion Acton [Marjoe Gortner] a future seeing alien who never looses his cool and suddenly pulls out something looking more like a toy light saber than a futuristic weapon, and obviously Simon [David Hasselhoff], the emperors lost son, who you just can’t stop laughing at every time he’s on screen. There’s plenty of way to long cheesy space fights, extreme close-ups of hardly painted spaceship models flying over the screen, quite a fair bit of stop motion animation, which I presume are done as tongue in cheek homage’s to the films of Harryhausen, but with a movie that is rumoured to have had an extravagant thirty thousand dollar special effect bonus, you can’t really complain. There are a few great, but unfortunately underused characters that Stella meets on her adventures, most significantly the Amazon warriors and their Queen Corelia [Nadia Cassini], if Cozzi had lost half an hour of other filler stuff he could have easily evolved this sequence. The biggest flaw that runs throughout the entire movie is the fact that Stella only just gets into trouble and then almost instantly she or one of her companions comes to the rescue, so there is never any real impending doom hanging over her. But the thing that strikes me is the serial cliff-hanger feel to the entire movie, fast transitions between assignments, journeys to new planets, winding up in trouble fast, and the almost immediate rescue just to star the circle all again. This could be an explanation for the structure of the movie. The score by John Barry is probably one of the weakest he has ever composed, and it seems as Cozzi only received three or four tracks because it’s the same damned score all the time. It’s in no 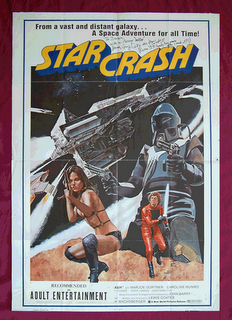 way the worst Italian space movie that I’ve ever seen, and I’m sure that Cozzi is quite pleased with the final results. You should know that he supposedly wrote the script before Star Wars was made, but nobody wanted to back him on this one, as sci-fi was out at the time. But anyhow, I’m sure that he definitely made a movie that he would want to see, and you have to admit that there is a strange charm to the movie that keeps it interesting.

Image: Well it’s at least in 16:9, but the image quality is not much to cheer about. Scratch and faded print which is quite annoying. Only French subtitles available, but an English & Italian soundtrack out over the three other French tracks.
Audio: Dolby Digital mono in French, English and Italian, French Dolby Digital 5.1, and even a French dts version. This all sounds promising, but the English soundtrack is atrocious. There are static noise distortions which come in randomly all the time, and almost every new scene is accompanied by the most terrible sound fuzz that it’s almost unbearable to watch.

There is a large amount of extras on the second disc, like the inclusion of the entire sequel movie Star Crash 2 1981 [Giochi erotici nella 3a galassia], directed by Bitto Albertini. It cashes in on Cozzi’s original and even uses some of the effects, but there’s less plot and more nudity in this one which still doesn’t even manage to come off as a cheap exploitation movie. It still sucks, and being a French edition, it’s dubbed into French without any subtitles for us who don’t speak it. Most impressive are the two documentaries; Making Star Crash, an 80 minute feature on the making of the movie, but it’s taken from a VHS source so the quality is pretty dodgy, an it’s only in Italian with French subs. There is also 36minute documentary mixing interviews in Italian & English with French subtitles where Cozzi talks about his films and his collaborations with Dario Argento. There’s a photo gallery, the French three minute trailer, filmographies and biographies.

It’s always thrilling when you find one of those great movies that you have fond memories of finally available on DVD, but considering that the old VHS copy that I used to have was a far better print I can’t help but feeling disappointed. This French Neo Publishing two disc Collectors Edition is in quite poor shape, with the dodgy sound and the poor image quality, but on the other hand if you can manage Italian then the bonus features on disc two actually make up for some of the errors on the main title.