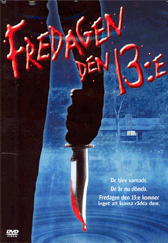 Story:
Teenagers are killed off one at a time in various creative and violent ways by a mysterious figure lurking in the woods outside .

Me:
Can you believe that its twenty-six years since this movie was made! Twenty six years! So to celebrate the past twenty-six years of shocks and hockey masks, I've decided to revisit all of the instalments in this most amazing franchise.

Spending my teens in the eighties, I loved these movies or any horror movies I could get my hands on actually and there's not much that can compare to the feeling that used to spread through me as I was handed fourth-fifth grade vhs copies of the latest splatter/stalker/gore/zombie/horror flick that everyone was talking about. Pure fucking adrenaline rush. This initial part Friday the 13th is a classic, and there's just no other way around it. It's not the first in the genre and it borrows heavily from movies like Carpenter's Halloween 1978, Hitchcock's Psycho 1960 and Bava's Twitch of the Death Nerve 1971, but it's still a landmark movie anyhow and we genre fans love it. It's been a few years since I watched it last but it actually had me off guard and made me jump at a few spots upon this last watch.

It's a pretty well used genre plot; teenagers have sex, smoke dope, and get killed off in various ways. What makes this first part quite unique is the fact that the iconic killer, Jason Voorhees, (and if you think he's not an Icon, take a look around at the next Halloween or fancy dress party you go to, there's bound to be at least one guy in a hockey mask), anyhow, Jason isn't even the killer in this first part! It's his mother, Pamela Voorhees [Betsy Palmer] who is taking revenge for the fact that her deformed son drowned so many years ago. Where? At of course, the camp leaders where busy shagging and smoking dope and didn't hear his cries for help. Jason makes guest final shock performance at the very end of the film, as the lead actor, Alice [Adrienne Hardy] the only survivor of Friday's carnage, sails a way to safety in a boat. Surprise, Jason is in the water... ...or is he? The violent effects are fast and furious, courtesy of Tom Savini, and there's not much time spent on character development, apart from say the two, three leads. This is formula for the Friday movies, and is why the Iconic stature was achieved, the ways Jason bumps off the quite annoying teens became the primary driving force. Nobody ever talks about the characters in these movies, but they can tell you at least three murders that stand out in each of the eleven Friday the 13th movies. The original Friday the 13th is one of those movies that everyone who is interested in the genre should watch, or even if you just want a few shocks to get the adrenaline flowing then this is a definite watch. And you can't go wrong with a movie where the village idiot, Crazy Ralph [Walt Gorney] rides out to what the locals refer to as and tells the teenagers, "You're all doomed", great stuff. Keep your eyes open and you'll see young Kevin Bacon in this marvellous genre classic that just grows with time.

Image:
The Disc has a rather decent 16x9 Widescreen 1.85:1 anamorphic print, but could have been better in colour tones. Being the generic European release there's 19 European languages to choose subtitles from.

Audio:
Nothing to brag about at all, 1.0 as the case states, that's mono. This surely could have been better and is among the most disappointing things about this disc. But when there's too much crap crammed onto one disc something is going to suffer, here it's obviously the audio track.

Extras:
The theatrical trailers, an informative commentary by Sean S Cunningham, but as there are 24 other subtitle tracks they obviously didn't feel the need to translate the commentary. The best extra is by far the twenty minute documentary "Return to Crystal Lake - Making Friday the 13th" where Cunningham and others from the crew and cast, talk about the origins and evolution of the movie.

So for such an important genre movie, this Scandinavian region 2 edition is definitely not a great edition, it's actually pretty disappointing come to think of it. Great movie, crap disc. One day there will be a super collector’s edition of this film, with uncut version, a few commentary tracks, new documentaries, old documentaries, etc... Oh was I dreaming again, sorry.

I agree, this film is a classic.
Love the review.