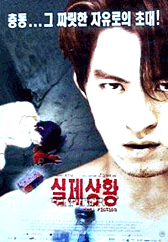 Story:
Street artist Na, [Joo Jin-mo, a Ki-Duk regular] grows sick of the constant abuse of the people who make their lively hoods working round the town square. A young woman [Kim Jin-ah] follows him around with her DV camera, and lures him into a kind of "find-yourself-theatre/workshop" where he is pushed and shoved by a mystic actor/being [who actually is his past failures & humiliations] until he breaks. His mental breakdown sends him through the streets of on a killing spree of all those who have done him wrong.

Me:
Well, well, sometime these things happen. This is the first Ki-Duk movie that really disappointed me. I knew that it was more experimental than his previous and later works, but in my opinion it's the one that doesn't quite make the cut. Ok so the basic Idea, trying to keep it real and disturbing works to some degree, the DV footage always gives a documentary feel. In most of the celluloid footage, there's people watching and looking into camera. There are even scenes where you see assistants walking into shot to remove onlookers. The fact that it was shot during three hours by Ki-Duk and eleven assistants is quite impressive. (I'd love to see the shooting schedule for this, as I have yet to work on a shoot where deadlines are held. So 3hours is amazing, if it's true!) In difference to the mental violence, the mortal violence is mostly off camera, which is a shame. I feel that if Ki-Duk had kept the violence aggressive and on cheapo DV camera quality it would have been much more effective, and disturbing. Unfortunately the stories in the film just play out like short scenes where half of them could have been left out of the movie. Don't get me wrong, there's some very Ki-Duk'ish moments & characters in this film, but it's not one of his better movies.

Image:
4:3 full screen, Dv quality as this is what it is shot on. The colours are quite faded and dull, but that's all part of the "reality" effect the dv cameras give. This edition has English, Chinese and Mandarin subtitles.

Extras:
Cast and crew texts, a Trailer for Hamburger Hill!, and the most disturbing 18minute featurette for Highlander2 Renegade version just has me wondering what the hell the distributor was drinking when they released this edition.