Planet of the Storms 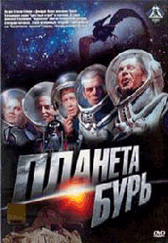 Story;
Three spaceships on a routine mission to Venus have to make an emergency landing on the surface. There they encounter flesh eating plants, lizard men, prehistoric dinosaurs and mysterious landscapes. Escorted by John the robot, the explorers separate into two teams to investigate the secrets of the mysterious planet.

Me;
I love this movie, and I worship Klushantsev. In my opinion he is one of the most underestimated geniuses of cinema ever! His movies are more or less unknown, but have without doubt inspired some of the most innovative Sci-Fi movies made (among them Kubrik's Space Odyssey, 1968) The story isn't the impressive part of this movie even though it's a decent one, but the effects and the feel of the movie are what blow me away every time I watch this masterpiece of Russian cinema. Unfortunately this is only one of the few non-propaganda movies that Klushantsev made, as the Stalin regime kept him for themselves and their propaganda machinery. The cosmonauts’ adventures on Venus are obviously with today’s standards quite cheap looking, but there's a feel to everything in the movie that pushes though and impresses. Hell this was made in 1962, and just that fact is so impressive. There are some underwater scenes that are amazing, the way Klushantsev made them is just so ingenious, the space scenes are totally believable and the brilliant twist ending is really cool. Good or Bad, Roger Corman bought the rights to the film, shoot new scenes with US actors, and butchered it into several "new" movies for the US drive in circuit as Curtis Harrington's Voyage to the Prehistoric Planet 1965, and Peter Bogdanovich's Voyage to the Planet of Prehistoric Women 1967 so if you've ever seen any of those movies or want to see the original piece of sci-fi magic from the early sixties, pick up this gem and you will never regret it.

Image:
Presented in full screen with an 1.33:1 original aspect ratio, there are a few flaws to the image and it still looks a bit faded. As the film hasn't been remastered by the standards we are used to there's still a fair amount of scratches and obvious damage to the print, but this I presume would be due to the fact that the original or source elements may not have been preserved correctly.

Extras:
There are not many, but on the other hand very valuable extras on this disc. A quite poor photo gallery, an informative biography of Klushantsev, and then the real treats, Vizhu zemlyu [I See Earth!], a sixteen minute documentary that Klushantsev made in 1970, and a twenty-six minute homage/documentary, Pavel Klushantsev: To the Stars! Directed by A Tkayla to commemorate Klushantsev 90’th birthday. So there is a lot to be learned about Klushantsev and his movies here.


I have an old version of Planeta Bur released by Sinister Cinema which presumably is taken from an 8mm or 16mm print in quite poor quality, so I'm very pleased that Len Film have finally put out this new edition complete with new translations for the subtitles and a somewhat better image quality. If I could dream though I'd love to see what Criterion or BFI would do with a movie like this with a full package digital remastering, but for the time being the Len Film version is an improvement on earlier versions and it will do fine for now.

I will absolutely have to check this film out, as I hugely enjoy USSR-made sci-fi, such as "Dead Mountaineer Hotel" or "Solyaris".
Thanks for the review!