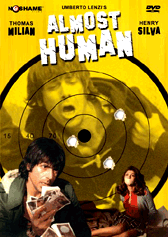 Story:
In a desperate attempt to hit the big-time and gain the lacking respect of the other hoods, badass wannabe Giulio, [Tomas Milian] decides to kidnap Mary Lou [Laura Belli], the daughter of his girlfriend Iona's [Anita Strindberg] boss. Leaving a bloody trail of violent death and murders as they cruise , Inspector Grandi [Henry Silva], swears to bring these beasts to a halt. Even if he has to put his own life on the line.

Me:
A fantastic Italian genre movie [Polizia] by Umberto Lenzi. A fast paced, high speed rollercoaster ride all the way through. Milian is wonderful as the psychotic Giulio, who stops at nothing to make his fortune. There's a fascinating drama within the group of criminals who have kidnapped Mary Lou, as Carmine [Ray Lovelock] falls in love with Mary Lou and realises that Giulio is going to kill her anyway when he gets the ransom money, and how this affects the earlier comradely within the band of kidnappers. Henry Silva is sort of wrong for the good guy cop, as he's usually the bad guy, but it works. The usual Italian 70-80's genre movie additives, like soundtrack by Morricone and script by Ernersto Gastaldi, make this a genre gem worth checking out.

Image:
Widescreen 2.35:1, 16x9 enhanced, remastered in high definition from the original 2P negative. It's a great looking print. English subtitles for the Italian audio are available

Audio:
Dolby Digital 2.0, with both the Italian soundtrack and the English soundtrack.

Extras:
Being a NoShame release you are bound to expect a lot of extras and this one is no exception.
Like a Beast...Almost; a 37 minute documentary about the movie featuring interviews with director Umberto Lenzi, screenwriter Ernesto Gastaldi, and actors Ray Lovelock and Gino Santercole. Original trailers; the Italian and International versions. Poster & still gallery, and the customary booklet with linear notes and biographies. My favourite extra has to be Milan Unleashed, a half-hour documentary/interview with lead star Tomas Milian.

Pleased to say it, once again NoShame keep releasing fantastic movies and fantastic editions, it’s a joy to watch this great Lenzi movie once again.