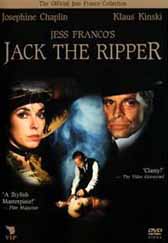 Me;
So perhaps sleaze monger Jesus Franco isn't everyone’s cup of tea. So it may well be. Crappy acting, terrible dubbing, atrocious camerawork, dreadful lighting and lashings of scantily clad men and women running all over on screen are just some of Franco’s trademarks, but somewhere at the root of all this is a true artist just dying to create that masterpiece to keep his flame alight. Sometimes Franco really gets it right, with the proper backing and people around him has managed to make a few gems of genre cinema, Gritos en la notche 1962, Vampyros Lesbos 1971, Sie tötete in Ekstase 1971, Jack the Ripper 1976, Loveletters of a Portuguese Nun 1977 and Faceless 1988. These few grains of watch able movies do on the other hand not forgive the other 180+ movies that didn't manage to make an impression. But, and this is a big but, almost every Franco movie I have ever seen has one or a few scenes of brilliance that always make me sit thought the rest of the movie. I will never forget watching the terrible Tendre et perverse Emanuelle 1973*, and just fast forwarding just to get through it, and all of a sudden, there's a wild 360 degree pan round the boat. Round and round two laps, and there's not a ripple in sight on the water, and the way its shot is from the deck and then out away from the boat. I can still to this day not understand how he pulled it off, but it still remains one of the most impressive pan shots I have ever seen. Today with digital technology it would be easy as hell, but in 1973! I have no idea how he did it.

Anyhow, back to Jack the Ripper. Shot on location in (with a bunch of stock shots from of course) there's a decent mood to this one. Shot by cinematographer Peter Baumgartner, it's one of those movies that have a steady camera, instead of the ones Franco shot himself, where he has the camera going everywhere. The Swiss sets and locations in double for without any problems. The movie obviously belongs to Klaus Kinski, as the mad Dr. Dennis Orloff/ Jack the Ripper [if you know your Franco you'd laugh now] He stalks women and slashes them to bits. Not much is on screen, but when it is its very seventies Euro gore. Hard and to the point. Constant co-star Lina Romay has a small part and meets the most visual death in the film, and Josephine Chaplin is Cynthia, the now separated wife of Andreas Mankoppf's Inspector Selby who desperately wants to catch the fiendish Jack. In a sort of bizarre proof of love Cynthia takes upon her self to act as bait to lure the killer into being caught, and boy does he fall for it as she looks just like his whoring mother, who is to blame for his guilt ridden murders. In this, the last of four movies with Franco, I feel that Kinski is sort of under used here because he doesn't say much and mostly sits frowning. But there are parts where Kinski lets it all hang out and goes Kinski. Overall the feeling and obvious production values put into this movie make it the enjoyable piece of Euro horror that it is. There's an almost Hammerish feeling to it, with the period costumes, the sets and the look to the movie. Being a Franco movie it's no surprise that he stays close to the elements that he masters with most confidence and plays safe along the same lines as his other better movies do [his template movie being Gritos en la notche 1962]

Image:
Image wise it's a rather decent print, Anamorphic widescreen, enhanced for 16:9 and the colour tones are solid, and the print has been supervised by the movies cinematographer Peter Baumgarten.

Audio:
Audio options on the disc are plenty, you can chose from the German, English, French or, Italian. The subtitles are the rather strange options of Finnish, Dutch or Greek. Although the audio of the English version is typical Euro trash standards, I'm positive that the VHS I owned years ago used to have more of a cockney tone to all the dialogue. Perhaps this also has been re-mastered for this director's edition.

Extras:
The extras on this disc almost make it worth the price of the disc itself. A deleted scene of more carnage, short but gruesome taken from an old 16mm print, the kind that you used to be able to hire before the golden age of Vhs claims the text. A seventeen minute long production report about the restoration of the series of Franco films released on DVD by Dietrich’s supervision. Production stills, and trailers for both 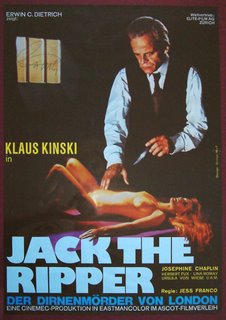 Jack the Ripper and Love Letters of Portuguese Nun. Cast & Crew bios, a factual text about Jack the Ripper's 1888 , and info about the Jess Franco Collection. And finally a full length commentary by Dietrich with English subtitles. But the highlight of the extras on the disc is a rather polite homage/documentary about Franco as told by producer Erwin C Dietrich, who produced some 14-15 of Franco's movies. In one part he tells the tale of how he watched in shock upon the terrible quality of 99 Women 1969, the first movie he produced for Franco. Shot in existing light, focus coming and going, improvisation, etc the film looks nothing like the high quality Dietrich was accustomed to. But Franco stood his ground, he claimed that this was the look of movies now, rough, gritty as close to reality as possible. Dietrich states right out that Franco's ideas of his art, where the same as the Dogme'95 rules set up by Lars Von Trier, Thomas Vinterberg, Levring & Kragh-Jacobsen in pretty decent homage if you ask me.

Overall a surprisingly good DVD release of one of Franco's better movies. It's going to be very interesting to check out the other Franco titles coming from VIP to see how long they can keep up the high quality.

*At least that's the film I recall it to be, if anyone knows better, let me know.