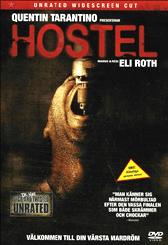 Story:
Paxton [Jay Hernandez] and Josh [Derek Richardson], two American backpackers travelling with Oli [Eythor Gudjonsson], a wild guy from decide after a high time in to take the advice about Slovakian girls being the best lays in the word and travel there. After they stumble into their room only to find two naked girls Natalya [Barbara Nedeljakova] and Svetlana [Jana Kaderabkova], who even invite them down to the sauna, they think that they have arrived in heaven. But after a few wild nights full of sex, drugs and booze they soon realise that their heaven is really hell when first Ole and then others at the Hostel start to disappear suddenly with out a trace. Me:
From the viewpoint, an American attempt to re-create and homage to European eighties shock and gore horror, Hostel is all right considering that it’s prime focus is for the mainstream. There’s no reaching out for the gore hounds of the underground here. This movie is made to cash in big bucks and therefore is obviously quite grim, but restrained. It could have been more visual, and it could have had a better ending, but it works and Roth pulls off in some ways a quite effective movie. The story is so typical and so used, American youths on that last big adventure through for loads of shagging and drinking. One is cocky and the other is moderate, then they accidentally stumble into trouble. Being in the horror genre you obviously will think of films like Landis’ An American Werewolf in 1981, and Greg McLean’s Wolf Creek 2005. Roth claims that the movie is inspired by true events and refers in the Hostel Dissected documentary that he found a Thai website where tourists could murder for the humble fee of $10.000. We will never know if it’s just one of those rumours that stick with genre movies or a fact, but it’s an interesting tale. The first attempt to break out of genre formula is the addition of the Icelandic character Oli. He’s the comic relief needed, and he’s just as much into the sex and drugs as the other two. After a fair bit of exposition Roth has his characters land at the Hostel and rapidly the spiral into death and torture starts. You have to at least give him some credit for trying to do something different in the genre. He has the forward and forceful character of Oli, be the first who end up in the underground Slovenian torture ring’s room of death. Knowing the genre, we are accustomed to this and it comes as no surprise, but when he turns round and does a Psycho 1960 on us and suddenly has Josh, who we have been following as the main lead for the first half of the movie, end up in the death chamber, it’s something of a shock. Not that we didn’t se it coming it has been done before, and if you are trying to do an eighties Euro horror, we know that you’ll never be certain until the end credits start to roll who’s going to make it out alive. After Josh is killed off and we're left with Paxton to helm the lead, the movie almost goes further into Hitchcock-ian terrain as he tries to patch together all the question marks surrounding Josh’s mysterious disappearance. Lies, cover-ups, secret societies (which I feel should have been used more] and sudden revelations manage to keep the movie on track. There’s a great sequence where Paxton re-checks in to the hostel and when he walks into his new room, he’s in for the most eye opening deja-vu experience of his life. There is a great Cameo appearance by Miike Takashi as Paxton approaches the place where the tortures take place. But pretty soon we end up in horror movie formula as Paxton finds himself abducted by the torture ring, only to miraculously survive, escape and go on an annoying revenge crusade of all who have done them wrong in the first three quarters of the movie. This is the biggest let down for me, I’m fine with characters managing to pull off astonishing escapes, but the “Kill’em all” revenge is just too much. If I had gotten out from the torture chambers I’d be on the first fucking train/boat/plane home.Image:
Shot in 2:35, the DVD is presented in 16:9 anamorphic widescreen. Being a Scandinavian disc they have loaded it with subtitles, 19 languages all in all, including Swedish and English.

Extras:
Trailers for other movies, a Kill the car multi-angle sequence from the a scene in the movie, commentary track by Roth, Tarantino (who produced the movie), Boaz Yakin and Scott Spiegel who all own the “RAW NERVE” movie company behind the film together, and then there’s the fifty-one minute long HOSTEL Dissected which is a documentary about the preproduction and shooting of the movie in Prague.

Considering the knowledge of American and Euro Horror these producers have between them I feel that they could have been bolder, and shown more on screen violence, way more effects and even though the theme is fairly grim, it could have been grimmer, even Paxton hiding in the back of a buss crying would have been a more suitable ending than the revenge ending that Hostel is stuck with. But like I said earlier, it works and it’s an ok movie to scare newcomers to the genre with.
- October 21, 2006