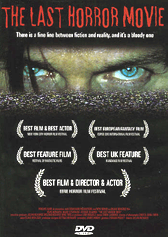 Story: On a rental video tape called The Last Horror Movie, psychopathic murderer Max [Kevin Howarth] has inserted his own personal video diary depicting his thoughts and feelings about his killings and the philosophy he has to motivate his murders.

Me:
This movie was a surprise actually; I deliberately didn’t read any of the text on the cover and have tried to avoid reviews for the movie, so when I stumbled upon it for a bargain price and saw all the awards printed on the front of the cover I decided to give it a shot. It starts very typical to the American stalk and slash genre. A lonely woman late at night closing down the diner. There’s a new report warning about a serial killer who just escaped from prison and he obviously turns up at the diner after a few stereotype “is that you Betty - stop fooling around” shocks. Just ass the killer is about to strike, bzzzt white static and the clod grin of a middle aged guy with his dark hair combed back comes into the screen. You are now staring into the face of Max a self proclaimed psychopathic murderer. The small details sell this transition straight away, the obvious difference in quality from the opening sequence shot on film with an exaggerated lighting and the grainy video shot in existing light, the absence of a soundtrack the auto focus shifts as Max moves around in shot. In a manner that is taken right out of typical “video diary” style, which even director Richards claims was one of his inspirations, as he worked on such productions previously, the movie follows Max as he stalks and goes about his evil deeds. The way Richards has chosen to build his quite impressive movie is intelligent, he has Max taunting us and mocking us all the way through, even in the first scene with Max he teases with a few short clips of his killings. The deeper we get inside Max head, the more he taunts us. In once murder he even forces his camera assistant [Mark Stevenson] to not film the violent murders so that he after performing the deeds can ask us the question, “Now ask yourself, did you really want to see that? I’m sure that you hate me now, but then why are you still watching?” Then we are forced to see the murders anyhow, and this works quite well all through the movie as Max plays emotional and psychological cat and mouse with us the voyeuristic viewer, because that’s what Richards reduces us to through this play with genres. The ending is somewhat of a let down, not plot wise, because the idea that this is all authentic could have played all the way out, and we could easily have returned to the final sequence of the opening movie. The tension builder that the video Max has taped over is his own hunting ground, by stalking the people who rent it, then confronting them with the fact that they have been watching real murders and why didn’t they question it or turn it off, before killing them, is good, really good. They take it so far that Max even asks the question, “How do you know that I’m not watching you right now? I may be out side, or even in your room!” it actually got me looking over my shoulder even though I knew it was only a movie and there was no way that “Max” could have been in the room. But then they end on regular end credits which just blows the atmosphere. I wish that they had been cooler and just played it all the way out and took it to the limit, which would have been so extreme. The other flaw is that they pull one victim or not surprise too many, there are several people who turn up on Max diary that are his mates or family members who he obviously never would harm. It works the first two times, but then the effect wares off and it gets predictable.

The movie is very reminiscent of films like Mc Naughton’s Henry Portrait of a Serial Killer 1986, and the late Rémy Belvaux C’est arrive près de chez vous [Man Bites Dog] 1992, harsh realistic violence, there’s a burning guy which is amazingly realistically done, the hand held gritty image, no soundtrack, an enigmatic but intriguing lead character, but it still manages to bring something fresh to the genre and I must say a movie really well done.

Audio:
Stereo 2.0. The simplicity works well for this movie.

Extras:
Commentary with director Julian Richards and lead actor Kevin Howarth, a ten minute featurette about the movie where Richards, Howarth, Mark Stephenson, special effect creator Paul Hyett (who went on to create the FX for Neil Marshalls amazing The Decent 2005) and producer Zorana Piggot talk about the movie. A five minute featurette about the casting, four deleted scenes, the original trailer and a bunch of trailers for other titles available from Nordisk Film
- October 24, 2006