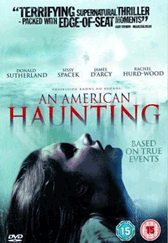 Story:
Set in 1812, , , John Bell [Donald Sutherland] and his family find themselves thrust into a nightmare when regional witch Kathryn Batts [Gaye Browne] casts a curse upon them over a feud for land and payment. After seeing a large black wolf crawling around their property, and their daughter Betsy [Rachel Hurd-Wood] obviously being assaulted by an unseen entity the mother of the house, Lucy [Sissy Spacek] takes things into her own hands as she begs Betsy’s school teacher Richard [James D’Arcy] to live with them and help understand the events destroying their lives.

Me:
What a complete disappointment this movie turned out to be! For some reason both my wife and I fell for the trailer and decided that this was a movie for us. Donald Sutherland, Sissy Spacek, scary, spooky based on true events’, it had everything going for it… But nope. Ok I’ll give them some credit for the acting, and the first half hour is quite effective, but when the “haunting” start Solomon for some odd reason decides that he has to loose the colour and go black and white! Why? Does he really not think that we’ve seen enough haunting movies to understand that the floating camera is supposed to be a subjective angle? Personally I felt insulted by this approach. Then it just gets lamer and lamer, not a lot of shocks and eventually he tries to twist the plot, which he already had us guessing already and thinks that we’ll be surprised. Then there are the logical blunders, Ok it’s a fantasy/horror movie, but if you rape someone there’s no way that they are going to bleed upwards is there! This has been done so many times before, so much better, perhaps Solomon should have watched a few genre movies before trying to pull a fast one on the paying viewers. And the unbelievable lame wraparound, as if we ever would give a shit about the characters here. It’s just so done before and would have been better if Solomon had dropped it and focused on the main story, the Bell Witch legend, supposedly the only documented Poltergeist activity. That would have been a better movie and a much better ending.

Audio:
Dolby digital 5.1, which is underused. With the amount of things flying around in this movie, there should have been more surrounding effects.

Extras:
There’s a strange kind of lame interview between Courtney Solomon & Sissy Spacek. Some extended deleted scenes and alternative endings which will have you rolling around laughing on the floor, especially the one with the doll ending. Finally there’s a totally bogus gag reel, which is nothing less that two explosion effects that go wrong and nothing to laugh about at all.

In my opinion An American Haunting is just another one of those movies that come around after the genre is re-vitalised, put up on big budgets by large studios, and then just are so poor that they trash the reputation of the genre to bits again. Let us have our horror hard and underground, that’s where it belongs. No wonder that it took five years for Solomon to direct another movie after the equally awful Dungeons & Dragons 2000.