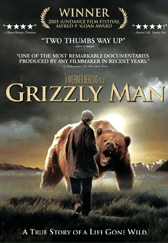 Me:
Bow down before the master! No one can tell a tale like Werner Herzog. Grizzly Man is in everyway a very typical Herzog documentary. Focusing on a totally amazing main character, Treadwell, whom you have very mixed emotions for the film asks the question was he a genius or was he a paranoid disillusioned hippie wasting his life with the surreal lifestyle that he lived. Some of the footage is so mind-blowing that it's hardly believable. This guy sits talking to Grizzly bears, he pets them, he even scolds them top show who's the boss and then begs their forgiveness for shouting. Amazing. Blending new interviews with people who knew Treadwell, visiting the location for his death, and archival footage that Treadwell shot himself, Herzog truly pulls of a marvel of documentary cinema. It's hard to decide what you feel for Treadwell and it's even harder to come to terms with his ironic death, although the idea of it being not quite as accidental as it first seems is very interesting. This is definitely one of the movies that I'll be returning to whenever I think about a Herzog documentary. I'd even go as far as claiming that it's one of those must see movies.

Image:
The movie obviously has varied image quality as some of the footage is new and some is archival, other material is Treadwell’s on DV footage. But the presentation is in 16x9 widescreen, and for this kind of documentary it works fine. Subtitles in English and Spanish on this edition

Audio:
Only one track, 2.0 Dolby Surround, although I would have loved to hear a commentary by Herzog on what his thoughts where about it all, which footage was his, which was Treadwell’s, etc.

Extras:
The theatrical trailer, trailers for other LGF titles, and a 50 minute documentary about the two day session creating the music for the film.
- October 12, 2006