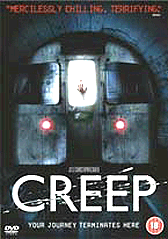 Story:
Kate [Franka Potente], on her way home from a party falls asleep on the subway station. To her shock she's locked in, deep below in the London Subway. She soon realises that she's not alone, there is in fact something prowling around in the tunnels, she's in for the most terrifying night of her life.

Me:
This was quite a surprise movie and I actually quite enjoyed it too, I wasn't expecting too much and feel like I got more than I was hoping for. The set up is very simple and very easy; Kate is on her way from one party to another one down town where she's going to stalk George Clooney. In these few minutes Smith manages to set her character on the map. Stuck-up and bitchy. She then gets into the subway where her drunken state leaves her asleep on the platform. When she awakes, she's all alone in the locked down tube station; this is where the movie quickly gets into motion as the mysterious "Creep" [Sean Harris] starts to make his appearances. A good build up, rather logic introduction of supporting characters, a few good shocks, which all come down to a somewhat tepid "science laboratory world beneath" London payoff as Kate fights frenetically to get way from the misunderstood being that is the Creep. Potente is just like she always is. German and plays along with the part. The thing that makes this movie work is the fear that everyone has about the possibility of being trapped down in the subway. What would you do, and how would you react if there was something stalking you and the people you meet down there? The most annoying thing about the movie is the squealing sound that the Creep makes. It just sounds like a lame Godzilla/vulture screech. Not to scary. Otherwise the movie is you average dumb scary movie which works. There's a few homage’s to other movies of the genre, the most obvious being the beautiful An American Werewolf in London “looking down from the top of the escalators” shot. So if you like your shocks in short stabs with little place for exposition or character development then this movie is for you. Actually just writing about it made me want to re-watch it.

Image:
Presented in 2.35:1 aspect ration. The image is nothing to complain about, the colours are strong and intense, which is as most of the movie takes place underground in the subway. English subtitles for the hearing impaired are included on the disc.

Audio:
Dolby Digital 5.1 which is used quite effective. At some moments in the movie you actually think that you are in one of the damp dripping tunnels.

Extras:
There are quite a few extras on this disc. First there's an audio commentary from director Christopher Smith. A series of featurettes'; 'Making Of', 'Production Design' and 'Make-Up Design’. Q&A at Frightfest. Alternative beginning and ending with storyboards, alternative titles, and finally the promotional package with the original trailer and TV spots.

To summarize, I've always been fascinated with subways after opening hours, and the fact that there’s' always way much more down there that meets our eye from the platform or the wagons. Most major cities have unused tunnels, abandoned underway vaults, and emergency subway systems for politicians and evil dictators. They are doomy, dark and scary, I would never want to spend a night down there, but there's a natural attraction to them. The movie plays on these elements and manages to pull off a quite effective and sometimes quite scary movie with all these elements. Just for a little bonus here's a link to a game based on the movie. This should give you an idea of what the movie is like.

Thanks Ty!
Yeah I like that flick, at least up till the guy in the white paint job starts squealing all through the last act.