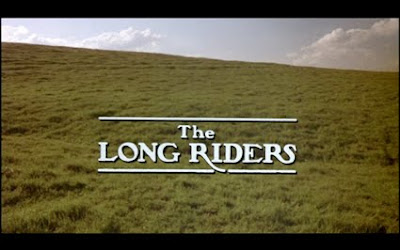 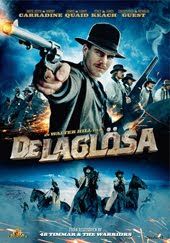 If I was ever told to pick out five Westerns of all time to watch for the rest of my life, I’d have a hard time deciding what the two Italian Spaghetti Western’s would be, but I’d without a moment of hesitation stick Sam Peckinpah’s The Wild Bunch 1969, Alex Cox's Straight to Hell 1987 and Walter Hill’s The Long Riders 1980 in that bag to go. 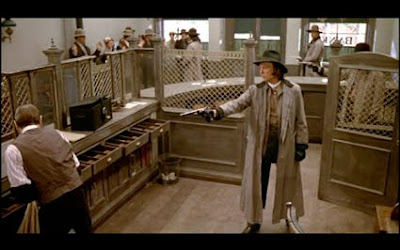 A band of outlaws take to the hills after a bank robbery goes haywire. Taking time to heal wounds obtained, the members go about their ordinary lives giving the movie time to set up characters and traits. Following a heist against the Union Pacific Railroad, the law starts pursuing the riders, leaving a tragic trail of death and destruction in their path – and they are supposed to be the “good guys”. Regrouping after a few months on the run, the James-Younger gang venture further away from home than ever, and Pinkerton is close on their heels. Nerves are tense and as any classic Western structure the movie comes to a culmination with a ferocious final standoff with a nihilistic outcome. 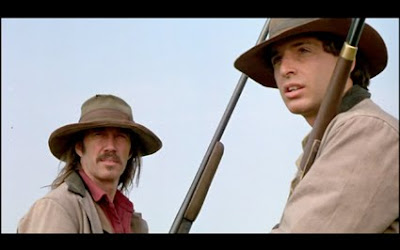 The Long Riders is a underestimated modern classic. It really needs to be re discovered and praised as the masterpiece that Walter Hill created. Sure The Warriors 1979, Southern Comfort 1981 and Last Man Standing 1996 are classics, but as far as I’m concerned The Long Riders is the peak of Hill’s career and is one hell of a superb piece of craftsmanship. It’s definitely not another typical American western gloating in their glory, but a dark and cynical movie that manipulates it’s audience in some magnificent ways. 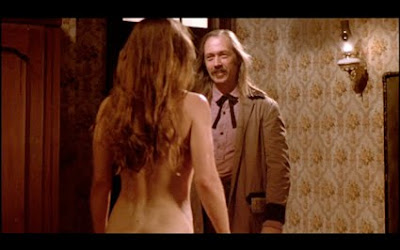 The Long Riders establishes character values through the initial heist; Jesse James kicks Ed Miller out of the gang for shooting innocent bystanders. There will be no blood spilt consciously by his gang. It’s also Jesse who stays away from the whorehouse and spends his time with his fiancé, Zee [Savannah Smith] who he marries earlier on in the movie. This all set’s up Jesse as a “good” character. ON the other side of the gangs infrastructure there’s Cole Younger. Cole seldom hesitates to engage in a fight or pull his sixshooter from his holster, even if it merely is to mark a warning. Cole’s relationship with Belle Starr [Pamela Reed] ,who he constantly points out is a whore, establishes the difference between the men when it comes to relationships. James has a fiancé who he later marries and starts a family with – good old fashion values. Cole’s abusive relationship with Belle continues throughout the movie, and leads to him duelling Belle’s husband, Sam Starr [James Remar from Hill's previous movie The Warriors 1979, and Michael C. Hall’s Dad in the tv show Dexter.], in a knife fight which once again shows that Cole, despite being a favourable character still plays dirty. Cole is a violent man, and he’s got nothing against bedding whores and other men’s wives. But even Cole redeems himself in the climax when he returns into enemy fire to rescue a fallen family member and later won’t reveal where the James brothers are hiding out. Despite his negative ways, he still holds positive values close at heart when it comes to the gang. 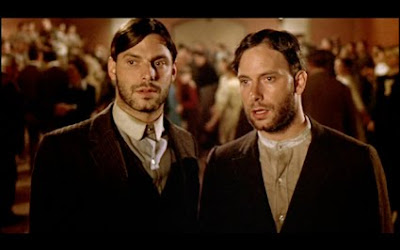 One of the fascinating effects that the skilful presentation of these likeable characters outside the law gives is that we tend to sympathise with them and feel empathy though the tragic events that happen to their family. Through showing the lethal errors of the Pinkerton Law Officials our primal urge for revenge enhances our empathy for the members of the gang. We want them to make it through even though history can’t be altered – unless you are Quentin Tarantino and want a magnificent twist to your second world war epos – and when Mother James asks her son’s “are you gonna make them pay” you will cheer on violent death for the responsible party. This also manipulates us into a mode where we show no sympathy at all for the law - the audience now become part of the outlaw band. 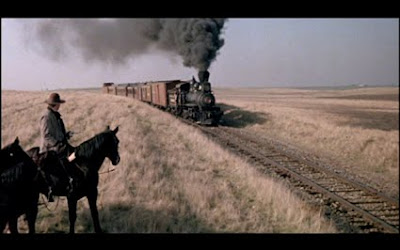 A while back I went on about how actors’ back-catalogue brought to the characters of the movie. Hill goes a step further and in a unique movie I can’t reacall from any other movie, casts real brothers as the brothers who make up the gang. There’s the Quaid brothers Dennis and Randy as the Miller’s, the Carradine brothers Robert, Keith and David as the Younger’s, and the Keach brothers James and Stacey as the infamous Frank and Jesse James. Hills choice of casting is phenomenal and there’s not a weak link in the chain at any time. 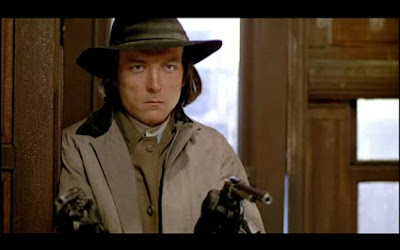 Supporting cast is also of significance to the movie’s narrative and plot. Yet another pair of brothers that play an important part in the movie, comedian Christopher Guest and his brother Nicholas play the bringers of death Bob and Charlie Ford. If you know the song, you know the outcome. The Ford brothers are often presented as somewhat hang around characters, and also often met quite nonchalantly by the gang. The Fords want to be a part of the gang, most likely, as it’s a fast road to infamy and wealth. It’s the same drive that leads them to that final moment, which also lead to them becoming immortalised in Bascom Lamar Lunsford’s 1924 folksong “Jesse James” – which the brilliant Pogues covered on their Rum Sodomy & the Lash 1985. It’s also rather ironic that when the gang decide to make their final heist, Jesse James brings in men from outside their clique - Bill Chadwell and Charley Pitt. If he had chosen the Ford brothers his life may have ended in a completely different manner. 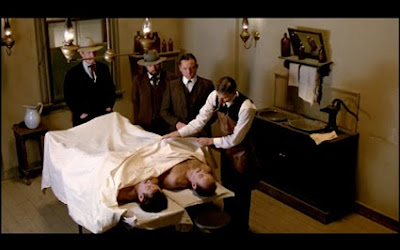 The outcast Ed Miller [Dennis Quaid] acts as an agitator towards the gang and returns though subplots on many occasions to emotionally and physically taunt the riders, although he vanishes from the movie after rejecting to expose their hide out. 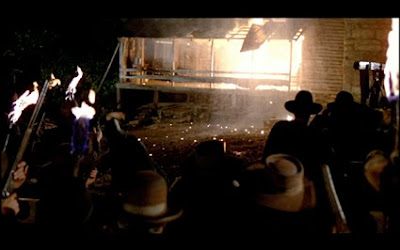 After the first act is dedicated to setting up the members of the outlaw band – our protagonists, the second act presents the antagonist through Pinkerton and Union Pacific Railroad who set a bounty on the band of outlaws. In the same scene we understand how popular the outlaws are when journalist Carl Reddick [Felice Orlandi] asks Pinkerton agent Rixley [James Whitmore Jr.] what he thinks his chances are of bringing them in. The subtext is superb, Redick knows that the people look at the James younger gang as heroes, and as long as they are at large, Redick has enough stories to tell to sell newspaper. It’s also Reddicks task to report to the audience the status of the hunt and inform us of time passed. He does this by opening his scenes with lines like “Sir, we met a few months back” and the public opinion is clarified when Rixley accuses Reddick of printing lies to make the people look at the gang as a modern Robin Hood. 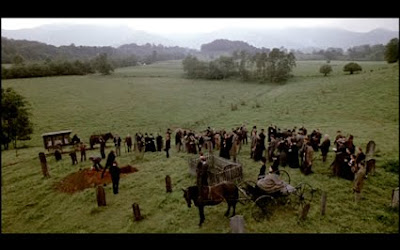 The third act takes it’s start as the gang regroup to plan that one last heist, the square head - lingo for Swede - bank in Northfield, Minnesota. Unchartered turf for the group, and a town full of citizens warned by Pinkerton that the gang may be coming… Tension builds and judgement is fogged by the anxiety, leading the gang right into a posse of gun toting angry Swedish descendants. Despite the Swedish language gags, well they are not really gags, but if you speak Swedish they come off as humerous moments. If you don’t speak Swedish it’s fair to guess that it would sound like some unaudiable jargon. It’s a harrowing moment when the glory of life outside the law takes a disturbing turn and justice catches up with our antiheroes. 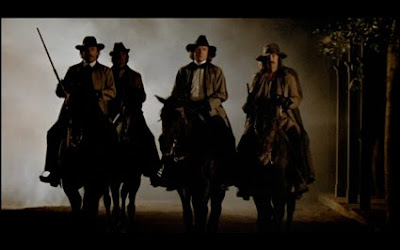 There’s a great omen foreboding the end of an era as they ride into Northfield. Tension is high, and whilst they stalk out the bank they are startled by a high pitched scream. The scream comes from the whistle of a steam engine driving down the main street – a signifier that modern times are a commin’- move over cowboy. 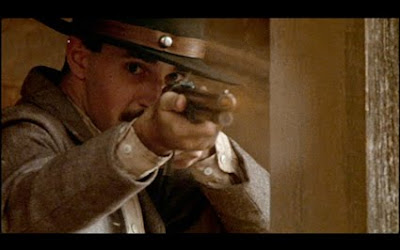 The Long Riders certainly ends on a sinister down note, and despite us knowing how it’s going to end it’s an effective and emotional last reel the movie unleashes. This is what happens when storytelling is at it’s most potent. We have been drawn into a world of outlaws, men that we shouldn’t identify with, but still chose to do so as they have been presented as empathetic characters. 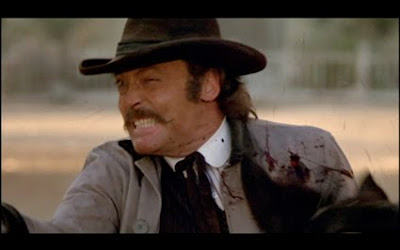 Telling the story of a band of outlaws that anyone who at one time in life picked up a stick and played cowboys knows everything about is somewhat a tricky mission, as we all know that these guys all ended up in wooden boxes riddled with slugs. But kudos to James and Stacey Keach – who wrote the movie so that they could star in it with their mates, the other bands of brothers! How friggin awesome is that? A movie that tells the genesis story of these great legends and became the first western ever to compete at the prestigious Cannes Film Festival! And we mustn’t forget Walter Hill's contribution to that mix, because what they ended up with is one of the all time greatest American westerns, a movie that still stands up and is a powerful, engaging, a times emotional and magnificent tale of a time when the west was wild and heroes didn’t have to be on the right side of the law. 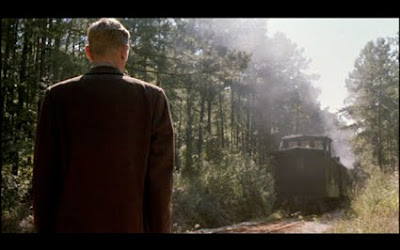 ...and here's that great Pogues cover!

Yeah, I need to rediscover this movie. Just gonna find my old dvd.

I've been a fan of this movie for a long time, and just watched it again not too long ago. It may not be the most historically accurate James / Younger telling, but it just might be the most fun!

Dave,
I have no idea about the accuracy of the movie, but I'll take your word on it. I'm sure that certain parts suffer from extreme makeover and glamorization to make them more likeable characters, the loveable bandit underdog has been a favoured character of US cinema for a long time.

Although it is a brilliant movie and I'm glad that you like it too.

I too love this movie and believe it should be right up there with Shane, The Good, The Bad, and The Ugly, and the better John Wayne movies (a lot!).

Not to be petty, but it was Zee who asked if Jesse, et. al. were going to make the pickertons pay.

Who was the man standing by the railroad at the end of the movie?

I always thought, maybe, it was a James descendant.