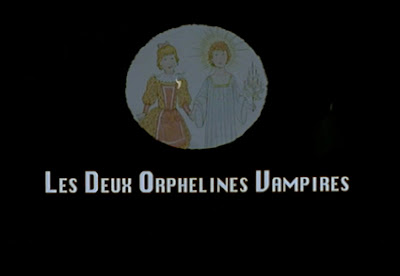 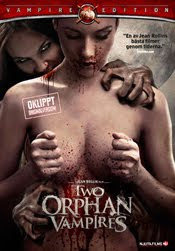 In my continuing rediscovery of the great movies of Jean Rollin, I felt that the natural step to go after the fascinating wonder Perdues dans New York (Lost in New York) 1989 was forward - to the stuff that was made after I initially saw those old Redemption videos. I’m certain that the themes and motifs in his catalogue of work all culminate in that splendid movie, and as I consider it somewhat of a bookend which marks an end to Rollin’s exploration of themes and motifs he had used since his 1968 debut Le viol du vampire (The Rape of the Vampire) I was curious to see where he went with these elements when he returned to filmmaking a few years further down the road. 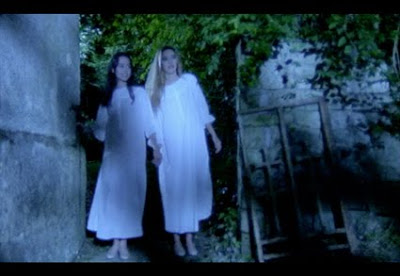 Two young women Louise [Alexandra Pic] and Henriette [Isabelle Teboul], partially blinded reside at an orphanage run by nuns – of course - who know nothing of the two girls background as they where abandoned as children, and Sister Martha [Nathalie Perry] looks at the two women as her little angels. Doctor Dennary [Bernard Charnacé] takes an interest in them and decides that he can help them to regain their sight. Later that night the two girls reveal that they actually only are blind (or colour blind actually) at day, whilst they at night can see and are in fact vampires as they feed on a stray dog in the nocturnal cemetery. 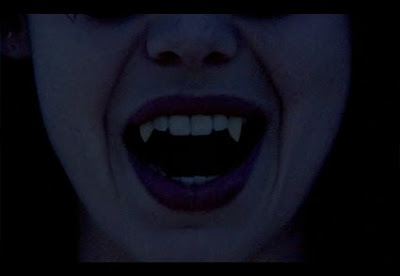 Dr Dennary takes the two girls into his care, but they take off again and at a near by circus a lost woman [Brigitte Lahaie], fails to believe that they are real vampires and provides the two girls with that precious blood the thirst for. Dennary goes away for the weekend leaving the two girls alone, and they obviously hit the town again where their bloodlust get’s the better of them. This childlike night of adventure ends with them being chased by an elderly couple that they scare in the cemetery, forcing them to hide out in a crypt with Venus [Véronique Dajouti] the second of three other night dwellers that they encounter on their way. 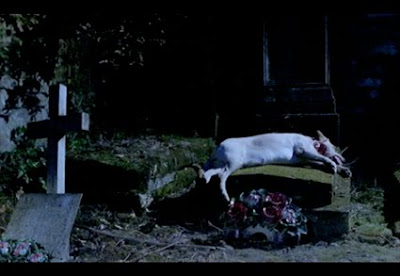 A final series of events see the girls taking to hiding back in the orphanage where Sister Martha’s heart is broken as she makes a shocking discovery. Running from the orphanage the farmer they scared at the cemetery earlier returns, and the movie gently moves into a traditional and poetic Jean Rollin climax. 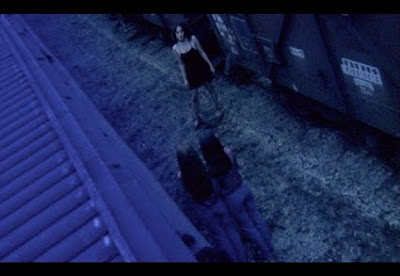 Returning to the Vampire genre after taking a twelve-year absence from it - Fascination 1979 being the last one - there certainly are many things that Rollin could have done here to make Two Orphan Vampires feel like a rehash of vampire clichés. But instead he avoids them and actually takes a complete different path. Normal vampire lore and the rules associated with it are discarded in favour of other strenghts and weaknesses. Where the girls are completely unaffected by the crucifix – they actually start off by living in that catholic orphanage surrounded by nuns, and hide out there when the real world proves to fearsome – they can also wander in the otherwise deadly ultraviolet rays cast down by the sun. But they do have one trait that keeps them somewhat restraint, they cannot see in the sunlight, which has them blind at day and in search of blood at night. 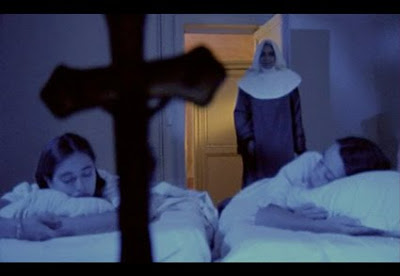 There’s plenty of religious imagery throughout the movie, and the way it holds no power over the girls, along with their disregard for their otherwise traditional values these symbols hold is shown in a neat little scene where Sister Martha kneels before a cross and prays for the two girls who she has just put to bed, then Rollin cuts to the two girls giggling, engaging in a brief pillow fight before they take to the night wandering into a nearby cemetery and feeding off a stray dog. Keep your eyes open for Rollin in a cameo as the cemetery caretaker who later buries the dog. During the first scene in the cemetery – after we realise that they are vampires – the two girls hold a somewhat philosophical conversation about how they where killed at one point in time, but have come back in their current state. This works as a connection to the earlier vampire flicks of Rollin, linking it with that space created pre Lost in New York - or Fascination if you like, as that was his last vampire film. The two girls hear music playing and dance a waltz on top of a tomb; the music is Phillipe d’Aram’s La Valse Fascinante from the Fascination soundtrack. This is followed by a flashback where the two girls walk across Brooklyn Bridge followed by the first feed of the movie. They also run through the New York locations that the two women in Lost in New York ran though in a montage which att the same time mimics scenes seen in that movie. It's an intelligent montage obviously crafted to bond the movies, hence making them hold a colective place in the Jean Rollin universe. It's not to far fetched to asume that this is what happened to the two girs following the enigmatic climax of Lost in New York. As most of Rollin's movies are contextually linked in several ways, answers to questions posed in earliers films are answered in later entries. 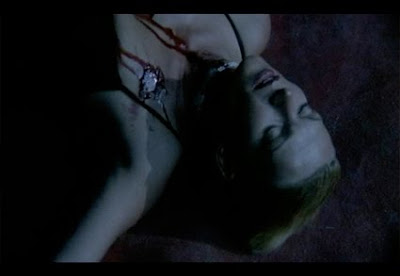 Several of the familiar faces are back once again, and the typical Rollin imagery is here, the cemeteries, chateau's, New York, abandoned railway stations, the looming camerawork and several of his familiar themes. There may not be the persistent theme of “Longing” and “Searching” so commonly found in his work, but there is a strong element of not belonging, which also can be found in the earlier works. 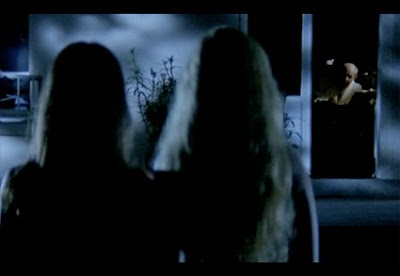 Two Orphan Vampires undoubtedly deals with the theme of not belonging, or not having a place in what may be a reflection on a modern world. This is a theme in addition to "longing" and "searching" which I now see to be of importance in Rollin’s movies, as it reoccurs in several of his pieces. Lèvres du sang (Lips of Blood) 1975, Lost in New York and it’s definitely a core theme to La morte vivante (The Living Dead Girl) 1982 where Françoise Blanchard has serious issues finding her place in the world after returning from the dead as a bloodthirsty ghoul. During their nocturnal endeavours the two girls meet several other creatures of the night which interact with the girls and all make the same claims – they have no place in this world. There’s the She Wolf [Nathalie Karsenty], the Batwoman [Vèronique Djaouti] and finally the Ghoul [Tina Aumont], which you know is the original word for zombie. All of them are anguished characters that have their own stones to bear as they roam the nightly world looking for a peaceful place to be part of. 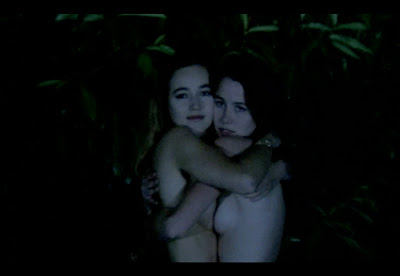 With the theme of not belonging or alienation in mind there’s an interesting recurrent of discussion whether the girls are in fact live or dead, life versus death that flows through the piece, as they talk several times about their last deaths in their last lives. They are also convinced that they are incarnations of Inca gods, which with a little ethnology understanding could be seen as a form or “not belonging” as the Inca culture only lasted some two hundred years where as the Mayan culture lasted for almost seven hundred years. Despite most of the cover art you will find for the movie, Two Orphan Vampires actually holds a more restrained approach to the nudity at times found in Rollin’s movies. Here he goes more for an emotion of the girls being childlike and naïve, which is noted in the scenes where they look at the book on Inca culture and decide which images in that book represent them. Later they change from claiming that they are goddesses and argue that they are magicians referring to a book of old magic show posters instead. They change their minds, just like children searching for a point of identification in their games. 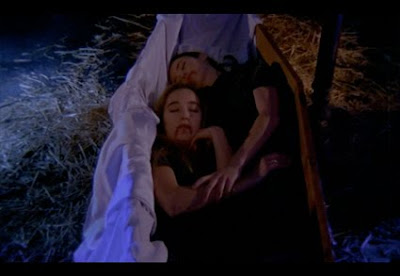 Finally, Philipe d’Aram’s soundtrack. Like many of the earlier movies he composed scores to for Rollin this definitely has some splendid dreamy and suggestive parts – but at times it get’s very perky and almost too electronic to match the mood and feeling of some scenes, which unfortunately has parts of the score feeling somewhat dated. Although some parts are pure bliss, and it get's the job done. 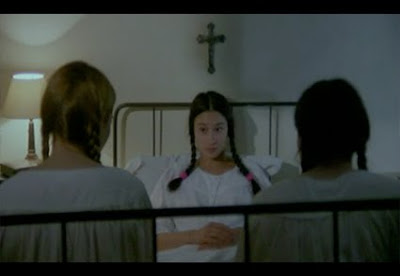 Based on Rollin’s own pulp novellas – five of them all in all, (one, which I seem to recall being released by Redemption Books back in the nineties) - Two Orphan Vampires at times the films oozes classic Jean Rollin. There are moments evoking those superb movies that make up the wonderful Rollin universe, but at the same time there are parts that are very tedious and drag down the overall feeling of the movie – well at least the parts that get monotonous. This is a shame, as the movie with its whopping 103minute runtime also is the longest of any Rollin movie made and it could have done with a decent trim here and there. The only other movie close is his 1968 debut Le viol du vampire (The Rape of the Vampire) with its 100 min. Perhaps Rollin found the return to vampiric horror such a pleasure that he felt compelled to stay with the material. 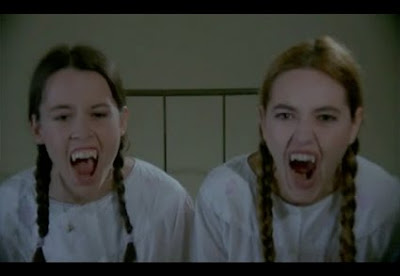 Two Orphan Vampires is indeed a qualified entry into the Rollin universe, and despite lacking some of the traits of previous works, its still an entertaining piece that at times evokes the poetry and emotions from his previous works. Two Orphan Vampires is a meditative, tender and delicate piece of film which firmly finds it's place amongst Rollin's cannon, and is definitely worth checking out if you enjoy the older films of the great Jean Rollin. 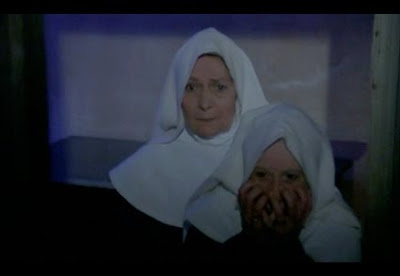 Two Orphan Vampires is due for release on the 6th of October from Njuta Films.