A cast of a hundred thousand + …COMPETITION #3

I've just had over 100.000 visitors here at CiNEZiLLA, and to celebrate this happy moment it's competition time once again!

Together with my great friend Bill over at ONARFILMS we’ve set up a grand prize of five spiffy, spunky and surreal gems, that you really need to have in your collection.

Not to forget the 40 page booklet cataloguing the Turkish Fantastic Films!

But we’re not going to give them away for free! You will have to work for it if you want to walk away with the booty this time.

OK, so below you will find SIX questions, and you need to email me your answers (killfinger (at) hotmail (dot) com) before 2:20 am on the 15th of April 2011 to be valid. Thereafter Bill and I will draw a winner who will receive this awesome pack of psychotronic cinema from Turkey!

1. What’s the name of Turkey’s equivalent to Hollywood?

3. Who played Tarzan in TARZAN ISTANBULDA?

4. Which ONE of these characters has NOT appeared in a Turkish film: FU MANCHU, DR. NO, THE INVISIBLE MAN, JACK THE RIPPER or THE ANGEL OF DEATH?

5. CASUS KIRAN stars Yildrim Gencer and Irfan Atasoy both starred in another Turkish masked avenger series directed by the same director. Who was he and what was the movie series?

6. Name 3 titles of Superhero/Fantastic movies with female characters in them! 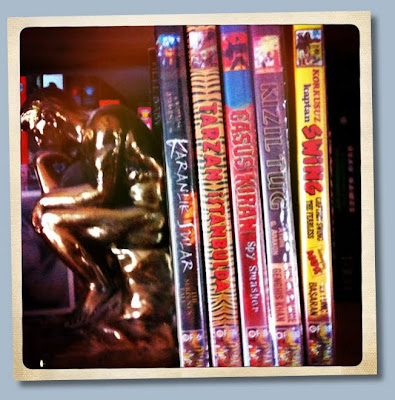 There you have it! Get to work, and good luck to you all!