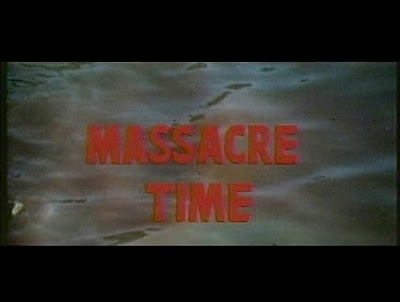 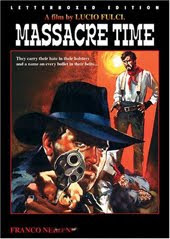 Massacre Time
Original title: Tempo Di Massacro
Directed by: Lucio Fulci
Italy, 1966
Spaghetti Western, 92min
Distributed by: Substance
The Lucio Fulci Spaghetti Westerns, all three of them - five if you count his two adaptations of Jack London’s Call of the Wild [Zanna Bianca (White Fang) 1973 & Il ritorno di Zanna Bianca (Challenge to White Fang) 1974 - but as far as straight Spaghetti Westerns – three. Nowhere near enough if you ask me. There’s plenty of shitty comments and hard critique aimed against these flicks. Perhaps more than the praise really they deserve is aimed at theses three movies. But they are important movies, and movies where Fulci explored and rooted some of his most favoured themes and traits. 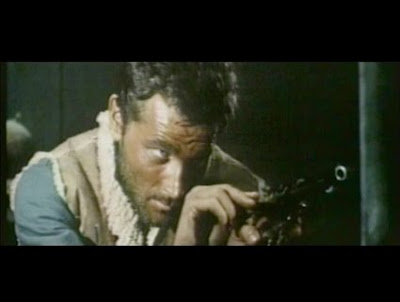 From the opening scenes of “Junior” Scott’s merciless manhunt, obviously inspired by Ernest B. Schoedsacks The Most Dangerous Game 1932, the tone of Lucio Fulci’s Massacre Time is set instantly. A hard, brutal and sadistic movie is exactly what is being served up here, and if you didn’t quite catch just how bad ass Junior is, there will soon be several more occasions to see just how deep his hate of mankind goes. 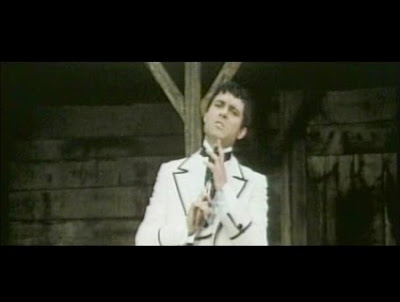 There are a lot of fans that like Massacre Time, and try to force the works of Fulci upon other filmmakers, as to give some sort of cultural value to the works of Fulci. I can completely understand them, and appreciate why they do it, but for myself I have reached a point where I don’t feel the need to evaluate Fulci’s work compared to others. He was a masterful visionary, and a great director, so there’ nothing to debate, Fulci stands alone. As should every filmmaker! One point that commonly get’s “forced” into Fulci’s final scenes to Massacre Time is that it’s supposedly a influence or sometimes “similar in style to the ballistic ballet” of John Woo’s eighties action flicks. This is obviously completely absurd. Yes it's an amusing thought, but we don’t need to force Fulci referents into other works, and I’ll get back to what those pigeons mean in a while. 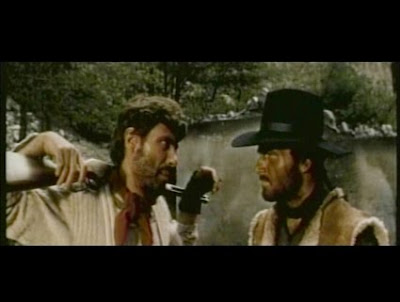 The only scenes in any Fulci movie to seemingly have had an apparent inspiration someone further down the road – apart from the obvious effects and grotesque moments - is the Egyptian bookend that opens and closes Manhattan Baby 1982. A little movie called Hellraiser 1982, directed by Clive Barker opens and starts in the exact same way. A mysterious market, a strange merchant and the obvious one, the Medallion/Lament Box being passed on and on. Fulci considered Barker to be one of his friends and dedicated Voci dal profondo (Voices from Beyond) 1994 to Barker, and Claudio Carabba. 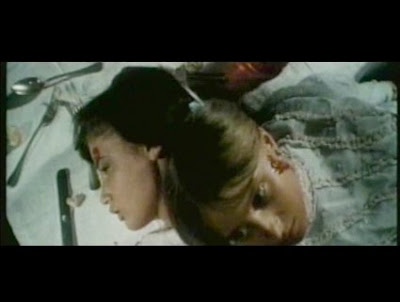 The Fulci westerns are decent westerns, and they certainly do polarise their audience, where most Spaghetti Western fans consider them so-so, the gore hounds find them slow and tedious, whilst the hardcore Fulci fans are fascinated by them lapping up every second of the narrative as he brings his assortment of traits to the wild west. That’s where you find me; I’m still finding new stuff on each occasion I re-watch a Lucio Fulci flick.
Franco Nero, somewhat mimicking his performance in Sergio Corbucci’s Django, (Franco who also starred in Mino Guerrini’s Giallo Il terzo Occhip (The Third Eye) Antonio Margheriti’s I diafanoidi vengono da Marte (War of the Planets) and as Abel in John Huston’s The Bible all in the same year - no wonder the guy looks tired), gives an somewhat engaging performance as the young Tom Corbert, who after receiving a letter from home returns to the town he once rode out of. There’s an uncertainty to who summoned him when he confronts his drunken half-brother Jeffrey [George Hilton], who obviously didn’t call for Tom’s assistance. Although there is a very clear protagonist presented when Tom first rides into town and sees the insignia of J.S. on almost everything in town, and moments later the scornful Junior [Nino Castelnuovo in an awesome performance]. The two brothers share no love, and there’s some really sublime stuff going on in the Colt house. In one scene Junior points out to his father how he misses his late night love… make what you will of it, but there’s definitely an incest theme going on there, and they climax the scene by playing a tune together on the piano!Needless to say Tom and Jeffrey – who proves to be the real hero of the piece if we where to apply Joseph Campbell’s The Heroes Journey as he’s the one who “refuses the call” – argue and bicker until they have a good old classic bar brawl that more or less joins them at the hip and they decide to take on the sinister Scott family. Which exactly what they do, with a few obstacles along the way – obstacles like a good old whipping, some sneaky shot in the back executions and a jolly violent massacre at the end. 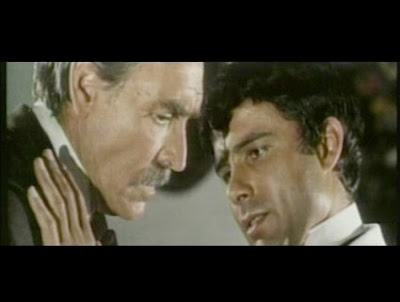 An important thing to keep in mind here is that up until Massacre Time, Fulci had only directed comedies and rather chirpy movies with musical segments. Massacre Time is of importance as this is where he first starts to explore the traits that would become synonymous with his later work in the seventies and eighties. The wonderful sadistic and exploitative violence of Lucio Fulci, and if you fail to see it, then just check out the whip scene and think of Non si sevizia un paperino (Don’t Torture a Duckling) and/or Paura nella città dei morti viventi (City of the Living Dead), and you will know exactly what I’m talking about. Where Dario Argento frequently uses several waves of assault in his violent scenes – like being pulled though a glass window, stabbed repeatedly in the heart, tossed through a ceiling window, hung and then finally fall to the ground, see never an easy death in an Argento flick – Lucio Fulci often tended to focus on the sadistic effects of events on his characters. It’s not just one or two bullwhip lashes that tear the skin of Tom Corbett, but an exaggerated and prolonged suffering that is a classic Fulci trait, all 87 of the lashings. 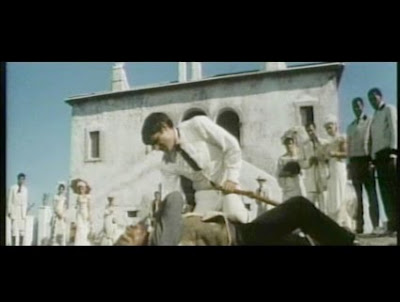 Being a stereotypical Spaghetti Western Massacre Time uses the schematic laid by previous movies, and has the hero take one hell of a beating before standing back up and settling the score. Massacre Time has the splendid peculiarity that the “Hero” in the traditional meaning still stays quite passive, and it’s brother Jeffrey, who actually is the sharpshooting settler of scores when it all comes around. 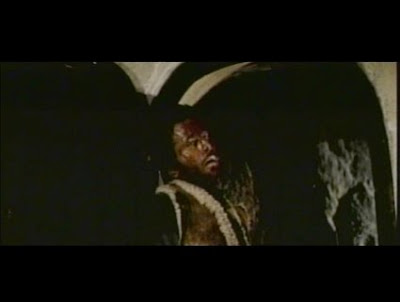 The script was written by Fernando di Leo, who was writing a lot of crime and Polizietti flicks at the same time, taking into consideration that there are No female characters of importance – a trait quite common in di Leo’s work – it’s most likely that Fulci didn’t have too much to do with the script. Because Fulci commonly had at least one cornerstone female in the most of his best works, and here’s that vital “Fulciesque” ingredient is missing. But this is not just a cheap spaghetti western when you start to explore it. I’d like to point out that there’s almost a story with Greek tragedy proportions hidden away in that great script. – Now before I get into explaining this, I need to warn you that I’m going to spoil a huge part of the movie here with this thread, so you ma want to skip over to the next section. - Tom Corbett is missing, lacking if you like, or even yearning for a family It may not seem so considering that he abandoned his mother, and he never really had any connection with his brother Jeffrey. But he packs up and heads home in a jiffy when receiving that letter summoning him back to Laramie. He has no idea of who his father is either. He’s quite a lonely character when it all comes around and there lies the desire to belong to a unit, a positive value, a family. He tries to bond with his older half brother Jeffrey, but Jeffery won’t have it, and instead they annoy each other. So during the final act, there’s a great sinister twist about to hammer down on the Tom character. An ironic twist, with a definitive tragic motif as Tom learns that his real father was Mr. Scott [Guiseppe Addobbati]. It was also Mr Scott who sent the letter to summon Tom back to Laramie, and Mr. Scott’s hidden agenda was to leave all the Scott fortune to Tom! This is also why Mr. Scott reacts to that exaggerated whipping earlier on; after all it’s his “favoured” child that’s getting his ass kicked. But it’s all going to be a waste of time as Mr. Scott is shot dead by his other son Junior after telling Tom about his inheritance plans. This leaves Tom’s final revenge on Junior even more cynical and harsh. 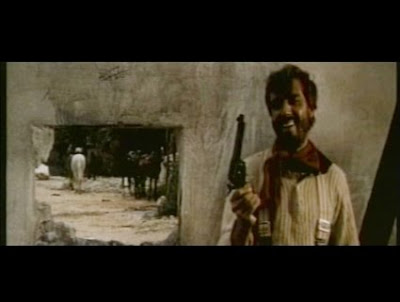 As for the Pigeons in that final shoot out… well to be true, the only thing the pigeon’s symbolise here is peace! The town of Laramie has had peace reinstated with the death of Junior. The town, the inhibitors and even the Corbet’s finds peace, hence the flying pigeons. To think that a simple shot of pigeons flying into the sky after a shoot out is an influence on Woo is about as abstract as claiming that George Hilton’s “Excuse Me Guys”, catchphrase used throughout the movie, was an influence on Richard Donner’s Goonies 1985 and The Sleuth’s “Hey You Guys!” catchphrase. It’s wishful thinking, and completely taken out of context, it’s peace they symbolise and this is further proven when sharpshooting Jeffrey lowers his revolver instead of shooting the dove that flies away in the last scene.
Massacre Time has a pretty catchy theme song “A man alone” sung by Sergio Endrigo to Coriolano Gori’s composition. Riccardo Pallottinis’ camerawork is nothing spectacular and never really gets above just doing the job, but it’s true to the genre and all the required wide shots and extreme close-ups of concerned gunfighters are in place. And I have to applaud the brilliant wagon-shooting stunt at the final battle, because that one is a gem. 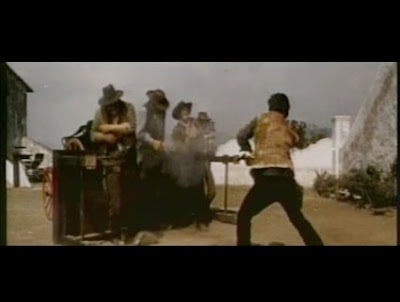 A further co-worker of importance on Massacre Time was editor Ornella Micheli who once again worked with Fulci on what would end up a string of eighteen movies together. A string of movies that would contain some of Fulci’s finest mid-period works like Una sull’altra (One on top of the Other) 1969, Non si sevizia un paperino (Don’t Torture a Duckling) 1972 and Sette note in nero (The Psychic) 1977.
Massacre time – a great starting point for Lucio Fulci’s western trilogy, only to be followed by I Quattro dell’apocalisse (Four of the Apocalypse) 1975 and Sella d’argento (Silver Saddle) 1978. 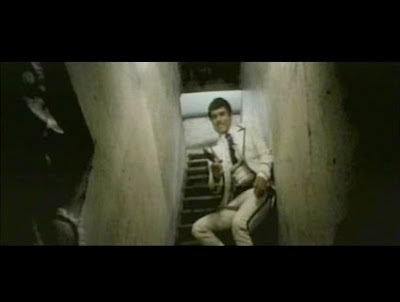 Amazing film! and I don't say that lightly, a lot of the amazingness being owed to the character Junior and played to perfection.

Interesting you raise a question of where Fulci's works are referenced directly - and set a bit of a challenge. A friend informed me that Death Proof references New York Ripper, now with Tarantino's scattergun approach to film references we can discount that one :)

LOL. Yeah, but there is a definitive Bird With Crystal Plumage reference in there.