One on Top of the Other 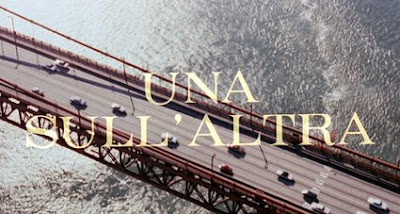 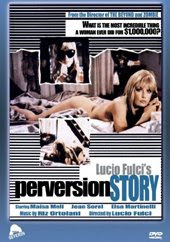 One on Top of the Other
(Aka Perversion Story)
Original Title: Una sull’altra
Directed by: Lucio Fulci
Italy/France/Spain, 1969
Crime/Giallo 97min
Distributed by: Severin

Story:
Dr. Dumurrier’s wife dies from asthma and then he spends the night with his lover. At a kinky nightclub they watch an act by starlet Monica, who looks just like his recently deceased wife. The cops start to investigate the death as they have received an anonymous tip that things aren’t quite right. Trying to convince the police of his innocence, Dr. Dumurrier tries his damnedest to find the true identity of Monica, but time is running away, and pretty soon he’s facing the gas chamber as he IS the prime suspect for his wife’s death. 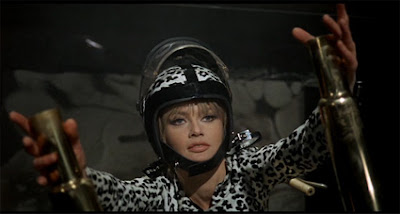 Me:
Perhaps mainly know for his apocalyptic zombie horrors drenched in the realistic special effects of Gianetto De Rossi, (Zombi2 1979, City of the Living Dead 1980, The Beyond and House by the Cemetery 1981) Lucio Fulci was indeed a very talented movie maker definitely worthy of the title maestro, which I personally prefer over the gimmicky “Gorefather/Godfather of Gore” title he’s more commonly labled with. More or less doomed to the blood and guts genre after the success of Zombi2, the almost sixty films he helmed as director venture far and astray from one specific genre, and deserve to be highlighted to fully understand the frustration he experienced later in life. He directed some amazing westerns, a bunch of comedic dramas, and even one movie with Jazz bad boy Chet Baker, and apart from a shitload of violent horror movies he more or less ventured into every genre that was in demand as he built up that impressive track record. And then the suites of stunning early Gialli that frequently are kept in the shadow of Dario Argento’s influence on the genre by lesser knowing film critics. The interest in Italian genre cinema seems to be more in demand than ever, and thanks to this many of his earlier titles are starting to turn up on excellent editions that put those old VHS tapes from Greece to shame.

The main plot of One on Top of the Other, Lucio Fulci’s initial exploration of the Gialli (an amazing suite containing: Woman in a Lizards Skin 1971, Don’t Torture a Duckling 1972, Murder to the Tune of Seven Black Notes 1977, and later the disturbing The New York Ripper 1982 and Murder Rock – Dancing Death 1984.) certainly is very reminiscent of Henri-George Clouzot's Les Diaboliques from 1955. But don't worry, Fulci surely puts his characteristic Italian spin on it and ends up with a great movie once again proving his phenomenal skills as screenwriter and director. Using heavy Jazz beats scored by Riz Ortolani and a series of very effective splitscreen collages much reminicant of Richard Fleisher's The Boston Strangler from the previous year, this is pop-culture Giallo at it's finest. 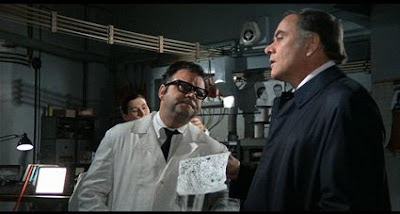 A sleazy San Francisco doctor, Dr. George Dumurrier [Jean Sorel] runs the family clinic (but only spends like two minutes there in the entire film) and lies to the press about the success the researchers at the clinic have been making, as to up the value and status of the institute, much to his brother Henry's [Alberto De Mendoza] great disgust. At the same time he is having an affair with photographer Jane [Elsa Martinelli] behind the back of his terribly asthmatic wife Susan [Marisa Mell] Mell who totally owns this movie. Her performance here is definately on par with her performance a year earlier in Mario Bava's Danger Diabolik. Well to get things going fast, Susan dies from an asthma attack as George is out messing around. He and Jane see a great future open up for them as Dr. Dumurrier seems to be the sole inheritor of Susan Dumurrier's tremendous wealth. So in a state of euphoria they set off down to the local strip joint and just as they are about to sip on their celebratory champagne Monica Weston walks on stage to perform her popular act. But Monica Weston looks just like the recently deceased Mrs. Dumurrier, apart from the blond hair and green eyes. So paranoia runs rampant as George and Jane try to figure out who Monica Weston is and while the cops, with a little help from the crime tech guys, seeing Fulci make his trademark cameo, start to accuse George of killing off his wife for the insurance money. So it goes, twisting and turning as they seduce each other in and out of bed, in and out of clothes, trying to figure out who is who and who's trying to fool who. Until it all is revealed in the final act as George sits on death row getting a surprise visit from that brother who we saw in the first reel... Hmmm. It turns out that he and Monica Weston, (who in fact IS Mrs. Dumurrier as we just saw in a great New York montage where she takes off her Monica wig and drops out the green contacts that have had George confused all this time, flips her jacket inside out and takes a flight to Paris) have been lovers for quite some time and this was all an elaborate plan to frame George for her "murder". And look it's going to work because when Henry leaves the guest pen, he says to George that he'll be dead in 24 hours and there's nothing he can do about it. Henry leaves George on death row the happiest he's ever been, because now he's the only one left to cash in the large inheritance and spend the rest of his life with Susan. 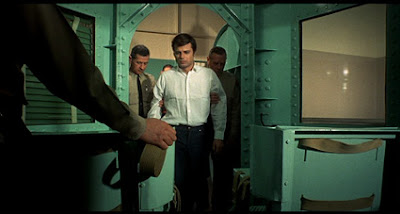 And you honestly think that they are going to get away with it...
...don't you...

...then the Italian twist, as per tradition, the one you can't predict, the one that all the "finer cinema experts" choke on, the chance meeting, the unforeseen twist of events...

In Paris a reunited Mrs. Dumurrier and Henry go to a restaurant where they are spotted by a bloke who we saw briefly earlier in the movie, a bloke who we understood then as the cops ransacked Monica's flat was deeply in love with her too, and now heartbroken he kills her and her lover on the spot. WHO THE HELL SAW THAT COMING?

Amazing isn't it! You never know what is going to happen, and that's the point of theses movies you never know where they are going to end up. The Italian thrillers, the horror flicks, the Crimi's and the Gialli, of the sixties to late seventies, they are so unpredictable, full of false leads and bottomless plot holes that you never really can figure them out. Even when you think "Oh shit it's going to end up like that.” it more than often does a 180 and goes the complete different way. It's almost like the great soundtracks that accompany these movies. They shift their tone, force and approach as they play out over the images. One on Top of Another is no exception as Riz Ortolani's brilliant score beats the crap out of many contemporary scores (and that doesn't mean that they are bad either) driving the tempo of the movie with it's jazzy beat and suddenly going from sombre to full force. It's definately one of my all time favourite soundtracks and if I have to make a list of ten great score composers Ortolani, is definately in the top four. 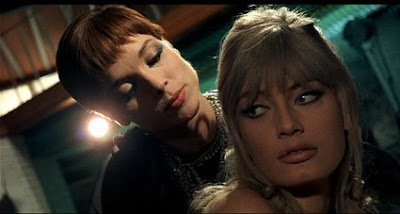 Having studied films, narrative, structure and story for way many more years than I care to remember (because I don't have enough fingers to do the math) I can easily see where many fellow scholars and "learned" people fail to see and acknowledge the magic of these "cheesy" Italian movies. It’s because they go against all the rules and don't give a damn about conventions, and because they don't follow suite they still hold up for viewing today. I can still without a problem get drawn into a Giallo or Polizia after just a few minutes, just lure me past that initial set up it's all just sit down entertainment as I fall for the false leads, grin at the corny dialogue, sneer with the sinister villains, lust for the leading ladies, bop along to the jazzy soundtrack and finally shake my head in disbelief as the surprise ending comes out of nowhere and just wraps the film up. It's all entertainment deluxe, as the false leads, plot holes, surprise twists etc make up part of the challenge. How many times haven't you been sat watching a movie and realized. "I know exactly where this piece of crap is going..." or "I knew he/she did it!" or it just ends up being a rehash of old ideas and you still feel ripped off in the end. Well it happens much less with a piece of European exploitation cinema from the 60-80's in my opinion, and Lucio Fulci's One on Top of the Other is a great example of it.

Extras:
Original Theatrical Trailer
But the most exciting extra with this beautiful edition is that you get the entire soundtrack by Riz Ortolani on a separate CD.