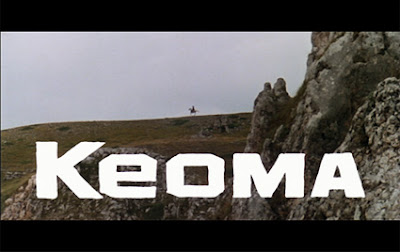 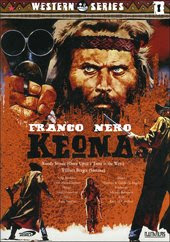 Story:
When the civil war has ended Indian half-blood Keoma returns to his hometown only to find it under the suffering grip of the tyrannous Mr. Caldwell. To make things worse there’s a plague harrowing the inhabitants and no one is allowed to leave the isolated village unless they are dead or being taken to the mines where the sick are disposed of. Among Mr. Caldwell’s band of hoodlums are Keoma’s three stepbrothers, Butch, Sam and Lenny, who never accepted that their father William Shannon saved Keoma from death and raised him as his own son. Subsequent to rescuing Lisa who is pregnant but still being sent to the mines as her husband had the plague, Keoma makes it his mission to let Lisa give birth to her child and free the town. But freedom rarely comes without a price. 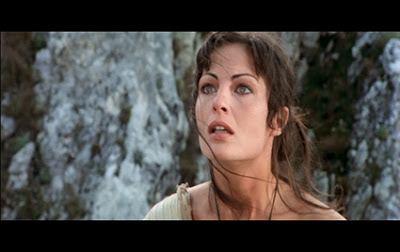 Me:
Like so many other Italian directors of the seventies/eighties, Enzo G. Castellari followed, started and perfected the trends and made the movies in demand. Keoma was his eight western and perhaps one of his finest, as it explores themes frequently used in the Italian Spaghetti Western; oppression, injustice, and the fight for freedom, but also uses a heavy dose of symbolism to make a statement about life and death. Shot in 1976 when the gritty Spaghetti Westerns where a fading kind, being replaced by more a comedic approach perfected by Enzo Barboni in the “Trinity” movies, often featuring Terence Hill [aka Mario Girotti] and Bud Spencer [aka Carlo Pedersoli] and post apocalyptic Sci-Fi adventures, Keoma is a great latter day entry into that magnificent genre that still stands strong against the tests of time.


Staying true to the traits of the Italian Spaghetti Westerns, it’s established from the start that Keoma is an unwanted guest in his home town, an outcast, a minority, in other words a traditional underdog, and we always root for the underdog. Not an underdog in the sense that he’s a weakling, because he is in fact the second fastest shot in the west out done only by his father, but more from a racial standing point. He’s an Indian, just below the recently freed slaves on the scale. After he is reunited with his father William [William Berger] they philosophize about the civil war that has just ended. In a somber comment Keoma's father points out that before the war the white man had a guilty conscious for slaughtering the native Indians, so they went to war to free the Negro slaves. Now that the Negro's have their freedom they have gone back to butchering the Indians. A sublime commentary on mankind and in many ways still true today where world leaders take to war in foreign countries to shift the focus of their poor jobs in office. Also there's an important indicator that even won battles can be failures. AS Keoma spends his first night in the town, he stumbles upon his old friend George [Woody Strode] who was the family caretaker when they where young, as seen in several flashbacks. George, once a slave, has now been given his freedom after the civil war, but has become an drunk instead. "I found out what freedom was worth. That's why I drink.". he replies when Keoma points out that the war is over he had gained his freedom, that which he dreamed of. 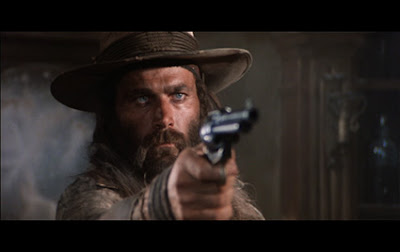 As usual Franco Nero does a great job of his portraying his character, Keoma, an Indian who returns to his hometown after the Civil war just to find that sinister ex-confederate Mr. Caldwell holds the small town in a tight grip. During the start of the film he encounters the gang as they slaughter townsfolk being shipped off to the mines where the inhabitants that have been infected with the plague are dumped to die. This is where he picks up a very pregnant Lisa [Olga Karlatos], and in a kind of statement against all the death and horror he’s witnessed in his lifetime he makes it his task to keep Lisa safe so that she can have her child. And he really goes through hell and high water to allow her to give birth to that kid. Lisa dies giving birth, symbolically cross cut against the final showdown between Keoma and his brothers; Death vs. Life, and as Keoma mounts his horse the old Witch [Gabriella Giacobbe] stood holding the child claims that she can’t look after the child because it will die, Keoma replies; “He Can’t Die! You know why? Because he’s free, and a free man never dies!” then rides off into the sunset. Also this final line is symbolic antithesis of the violent solutions taken to most problems met so far in the film, which could be interpreted as Keoma beating death, hence the old witch being Death, and when presenting her with a new life (the child,) he brings death to an end forcing her to embrace life instead. This theory is supported by the few times that the Witch reappears in the movie. Just after Keoma saves Lisa from death in the mines, as Keoma hangs beaten in the town, also when he completes killing off the gang members. Death is there to watch over his actions, possibly guiding him on. But Keoma makes his mark, he proves his point, the time of death is past, the leaders are dead, the gang disbanded. The townsfolk have their freedom once again and with it new hope as new life is brought into the world.


It’s uncertain how much of Luigi Montefiori’s [Aka George Eastman, another great Italian character actor and still to this day an active screenwriter.] original script was used during the shoot. Rumors has it that Castellari, unsatisfied by the script discarded them and had new scenes written as they where shooting. Although I think that it’s just an entertaining anecdote and pretty unrealistic as the movie is a very tight production and holds a high level story wise. I find it hard to see how they could have scripted the plot and all it’s subplots [the story of hatred and jealousy between Keoma and his step brothers as children, the three brothers own sinister plans to take over the town after Caldwell is killed by Keoma, the long thread death and life that battle throughout the movie, etc], while in the midst of production. It doesn’t add up, and Keoma would have been a much lesser movie if this was the case. 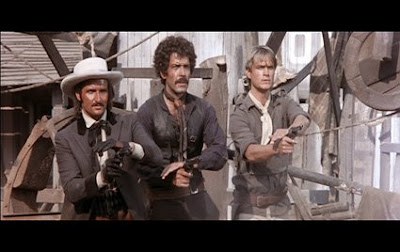 Keoma is a delight to watch and there are some amazing camera tricks that still hold up today. In the pre-title sequence there’s the origin of Keoma told through a flashback that still surprises me each time I see it. Just a simple trick as panning to the left and we are suddenly in the midst of an Indian slaughter, set up so that we learn the origin of Keoma and his tragic background. Also there are several occasions where his memories of his childhood fighting his three stepbrothers, hanging out with his stepfather, being taught to shoot bow and arrows by George [Woody Strode] are elegantly woven into the scene initiating the flashback, and on some occasions even have Keoma as an adult in the midst of the events. This is done as the picture editing of Gianfranco Amicucci, and the cinematography of Aiace Parolin all come together very neatly .And you can't really talk of Keoma with out discussing the soundtrack by Guido and Maurizio De Angelis which features really strange folk/opera singing by the enigmatic Sybil & Guy. But as terrible as it may be at times, they are singing the movie plot and pushing it forward, asking questions and making statements, which is really entertaining, and kind of works as an inner monologue of Keoma. So if your after a great piece of late seventies Spaghetti Western with out the laughs and comedic gags, then Keoma is definately something you might want to check out.


Thanks to Jenny for sugesting that the old Witch was Keoma’s subconscious when she first appeared in the pre-title sequence, for this got me thinking about the Sub Conscious - Defeating Death – Seventh Seal – Theme.


Extras:
20 Minute interview with Castellari on the westerns and Keoma, the original trailer, poster and still gallery, biographies for both Castellari and Nero, and trailers for Sergio Martino's Torso, Jamue Balugero's The Nameless, and Lucio Fulci's New York Ripper also available from AWE.