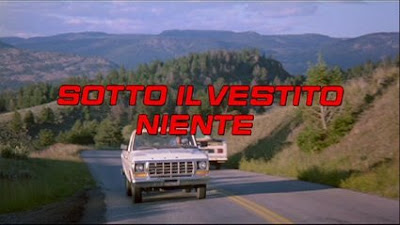 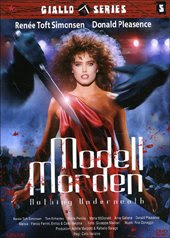 Story:
Fashion, models, drugs and murder in Milan is what brings Wyoming Ranger Bob Crane to Italy as he searches for his missing twin sister Jessica. Through telepathic visions Bob saw Jessica being murdered and with the help of aging Commissioner Dannesi he starts his own investigation into his sisters’ whereabouts. Quickly making friends with Barbara, another model living at the same hotel as he is, he finds himself in the middle of a series of murders where the friends of his sister are being killed off one by one. Everything points in the direction of the sleazy jeweler Giorgio Pelloni whose main interests are snorting cocaine, looking at photographs of himself and shagging fashion models, sometimes more than one at a time. After presenting a water tight alibi, a dark secret is revealed, and the investigation has to search for new suspects. That’s when Bob receives a strange telegram from his missing sister… 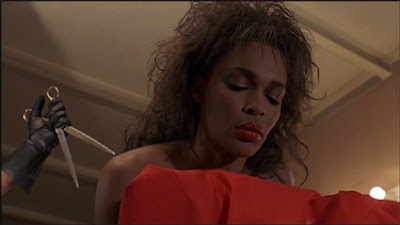 Me:
Like many of the great sub genres there comes a time when they painfully prove top have past their best before date. The Italian Giallo is no exception, and Carlo Vanzina’s Nothing Underneath, shot in 1985, is mostly a showcase of a dying genre’s last gasps. The story, un-originally enough, is set in Milan, where young photo models are being murdered one by one. As mentioned, it’s a quite used theme and definitely previously explored within the Giallo sphere, from Maria Bava’s Blood and Black Lace [Sei donne per l'assassino], 1964, to Andrea Bianchi’s Strip Nude for your Killer [Nude per l’assasino] 1975. (Although the Giallo as a genre lived on well into the early nineties presenting a few decent pieces along the way.) The gloved killer stalking fashion models getting in and out of their clothing feels quite tedious when it’s still being used some twenty years later. On top of this there’s a few quite misplaced shots’ that do more to disturb the movie than help it along. For an instance there’s a completely uncalled for crotch shot which looks more like an insert than anything else right in the start of the build towards the second killing. Don’t get me wrong, I have nothing against sporadic nudity as it definitely is part of the Giallo atmosphere, but this shot is just so out of place, and actually had me making a mental note that the later Gialli certainly don’t have the “kinky charm” that the early ones had. But, naked women, suave men, gloved assassins and onscreen violence are all part of the tricks of the trade so it shouldn’t distract me; rather the opposite but the unmotivated beaver shot just annoyed me. Even the sleaziest entries into the genre didn’t go that far without a very motivated reason. There’s a much classier shot a few minutes later where Carrie [Catherine Noyes] walks out on Giorgio [Cyrus Elias] after refusing to have sex with him. She runs from the suite and on her way she walks over a subway grid, and shot from beneath the grid the wind lifts her skirt in a The Seven Year Itch/Marilyn Monroe homage that is far more refined. And that’s the level it should be kept at. More of a teasing of the senses instead of a gagging close up.

Anyhow enough ranting about that because this film does have a few very interesting things going for it after all. The main plot focuses on Bob Crane [Tom Schanley] a ranger from Wyoming who travels to Milan to investigate what has happened to his twin sister Jessica [Nicola Perring] after experiencing a vision where he sees her being murdered. This twin paranormal connection is used in several occasions and works great as a bridge between moving us to the next set up and presenting new twists in the plot. Like the climax where Bob “feels” the presence of his sister and makes his way towards her location. It would have been impossible to have him find that flat with out this great device, and it works like a charm. Again it's nothing new to the Giallo sphere as premonitions of death have been used in the genre before like in Lucio Fulci's Murder to the Tune of Seven Black Notes to name one. The legendary Donald Pleasance (speaking with the most ridiculous fake Italian dialect) is Commissioner Daniesi who at first neglects Bob’s inquiry, but later reveals that he is going to retire in two weeks time and want s to close this case before he quits the force. Pleasance is always a joy to watch and even though he looks really old and tired he impresses like hell as they chase a suspect through the Milan Central station. But after starring in Seven movies during 1985 it’s easy to understand if he was getting tired. There are a few surprises that work really well as they are built up to through genre conventions. Towards the end of the film when most of the “red herrings” are killed off and there are only two options left to who the killer can be, the missing Jessica is reintroduced, and things take an unexpected twist just before the climactic finale where the true killer chases Bob around the apartment with a power drill. Also one of the minor details that I love about the Gialli is that the title is frequently reflected in the narrative of the movie. It almost becomes a second puzzle to solve as you watch the movie, where it the title reference hidden this time. In this case the original title Sotto il vestito niente translates more or less to “nothing underneath the clothes” which is a reference to why Giorgio likes fashion models so much.

I feel that I have to mention something about Renée Toft Simonesen here seen as she is the leading lady of this movie. She plays Barbara, Bob’s “love interest” in the movie, who not until the very end of the movie proves to have known Jessica much more intimately than she has been claiming throughout the movie. Danish “girl next door” Simonsen was one of the most successful models during the 80’s. She was the cover girl on German Vogue in March, April and September and was also featured on the cover of Roxy Music’s compilation album Atlantic Years in 1983. She only acted in two movies, one being this one and then in a second movie with Carlo Vanzina, the comedy Via Montenapoleone in 1987. Then she started to pull herself away from the fashion industry, and after turning down a role as Bond girl in 1988 she retired from the business to start studying psychology. Today she has authored two books and works as a psychologist. Now doesn’t that make you want to sit down with her and listen to her analysis of the Barbara character from a professional stance? I know I would! 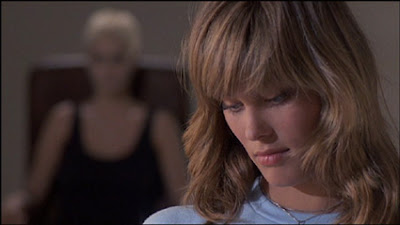 In the late eighties there was a significant change in the soundtracks of most Italian genre movies, where the great collaborations with the likes of Ennio Morricone, Riz Ortolani, Stelvio Cipriani, Bruno Nicolai and Goblin where set aside for a more modern approach. For some undeclared reason, modern pop and rock oozed it’s way into the soundtracks of several great Italian genre pieces, which just like this one, damages them now some twenty years later as what was once considered contemporary music hasn’t aged as gracefully as the jazzy scores by Ennio Morricone has, or the ferocious progressive rock of bands like Goblin have. Remember Lamberto Bava’s Demoni movies? Remember Argento’s Terror at the Opera. Remember Michele Soavi’s The Sect [La Setta]? When they first where released the new wave and hard rock music was spot on, but today those movies are almost unwatchable as the soundtracks are so outdated by their musical choices. Even with its score by Pino Donnagio, Nothing Underneath suffers from the late eighties pop music used in the fashion shows, the shoots, the parties and just annoys the crap out of me. If only they had stuck with the Donnagio score it might have had a chance to stay timeless. 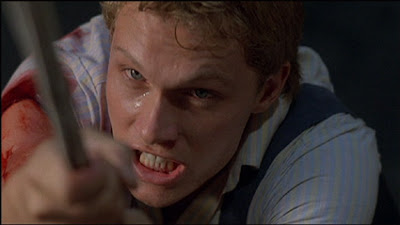 But still, Nothing Underneath is after all a decent Giallo, even though it shows the flaws of being in the later period of the genre and mostly just rehashing old ideas. But there are a few interesting twists that make up for the familiarity and in my opinion rather mild approach to the onscreen violence. Compared to earlier Gialli and contemporary Italian horror of the late eighties there could have been a lot more visual carnage on screen, but here the most visual it gets, is a pair of scissors pushed into a back. And even though the spin on the almost obligatory “bath tub murder” is kept off screen only to be used by the killer to wash the blood of the scissors, there are several scenes where they could have gone so much further making a bigger imprint. The power drill fight at the end is very lame, it could have gotten much more violent and gorier with a few effects, and the girl who committed suicide could have been much more visual. One exploding head effect could have worked wonders for the movie and really have made a mark. Screenwriter Franco Ferrini shows the beginning of a great career taking off with this movie. Where he previously had been part of a larger writing staff on the likes of Michele Massimo Tarantini’s Crimebusters, and Sergio Leone’s Once Upon a Time in America, he moved up to being co-writer with Lamberto Bava on Demons, Dario Argento on Phenomena, Two Evil Eyes, Trauma, Stendhal Syndrome, Sleepless, The Card Player and Do You Like Hitchcock?, and not to forget Eros Pugielli’s Eyes of Crystal from 2004 the closest thing to a Giallo to hit the screens in a long time.

All in all, Sotto il vestito niente is entertaining, it has a few surprises you won’t see coming and most of all an interesting study of mid eighties music, style and fashion, not to say one of the better movies of a dying genre.