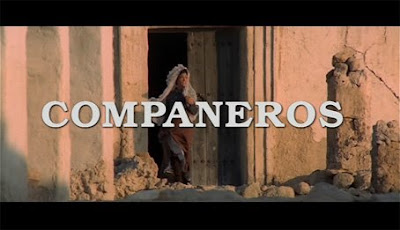 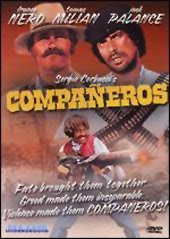 Compañeros
Original title: Vamos a matar, compañeros
Directed by: Sergio Corbucci
Italy/Spain /West Germany, 1970
Spaghetti Western, 118min
Distributed by: Blue Underground.
Story:
Swedish arms dealer Yodlaf Peterson arrives in San Bernardino to sell weapons to general Mongo. In San Berdnaninio he meets Mongo’s top henchman El Vasco, who doesn’t find the intruders presence a pleasure. When General Mongo finally arrives he tells the Swede about his sinister plan to crack the town safe and steal the valuables, which he offers to split with Yodlaf. The only problem now is that the only person who knows the combination to the safe is Professor Xantos, who is incarcerated in the state prison. The two foes Yodlaf and El Vasco have to put their differences aside and put together a swindling plan to break the professor out of his prison. A job perhaps easier said than done. 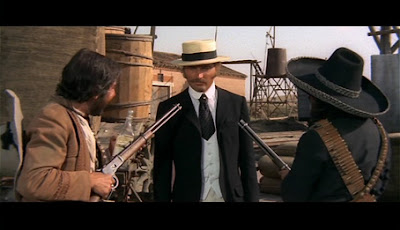 Me:
Sergio Corbucci, possibly one of the finest directors of Spaghetti Westerns, and easily on par with Sergio Leone, directed Compañeros in 1970 and is together with his two previous films Django (1966) and The Great Silence (1968) often quoted as three of the finest entries into the Spaghetti Western genre. Although lacking the grittiness and harshness of the two above mentioned movies, Companero’s takes a slightly lighter approach to the genre. Sure the violence and grit is still there, it’s just eased up with a few comedic scenes and several humorous encounters. But this works in favour of the movie as it brings a healthy balance to the relationship between the two lead characters The Swede [Franco Nero], and El Vasco [Tomas Milian] as they work out their love hate relationship throughout the movie. From that first meeting in the town square, to the final stand off at the end, they insult, torment, tease and bicker with each other all the way through, even though they are working towards the same goal they are very dependant on their represented counterpart. And finally we end up with them starring at each other in glorious Spaghetti Western close-ups in a final climactic duel, where the love/hate relationship shows its true colours. But I’ll return to that later. 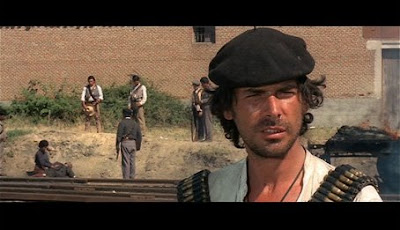 I find it very amusing that Corbucci shows the real crook in this movie, is not as in US westerns, the Indians, the Mexicans, the Chinese, or the Europeans etc, but the rich white man and their corporations. When all of your main lead characters are in one way or another villains, Yodlaf, El Vasco, John the bounty killer, you have to put something else in the contrast frame. And Corbucci does it with subtlety. There’s two small scenes in the movie were vile business man Rosenblum demands that Professor Xantos [Fernando Rey] gives him uncompetitive access to the oil found in the land, and if he agrees to this they will contribute a large donation to the revolutionaries cause. But when Xantos refuses, because the land belongs to the people of Mexico, Rosenblum pays a visit to the mercenary John [excellently portrayed by Jack Parlance] and asks him to take care of the professor. Contracting Professor Xantos death to lay his hands on that valuable oil. 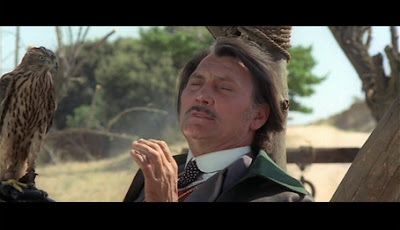 Let’s stay with Palance for a moment. His villain, like the rest of the cast, villains, is a rather interesting character. A bounty killer who cares for nobody but his pet hawk, a hawk which we learn saved his life after Yodlaf and he had a rather nasty encounter in Cuba. Hence the agitation towards the Swede, who he by the book tracks down and leaves hanging from a noose in the middle of nowhere. Determination and the satisfaction of completing a task, and also the promise of more marijuana cigarettes drive this cold blooded killer who not only fails his task once, by three times. But not before he kills the Professor, making all the struggle and overcome obstacles of the movie ironically pointless. 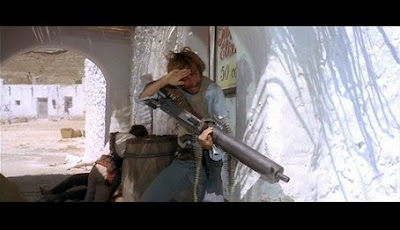 Sticking close to the rules of the genre, no Spaghetti Western is complete with out its grand finale showdown, and just like in the previous movie, Django, the Gatling gun is brought back out for a final frenetic thundering explosion of death and bullets as the Swede and Vasco go up against General Mongo and his men. But then there’s the added value of the wraparound tale. The main body of the movie is told as a long flashback initiated from those opening scenes where El Vasco and the Swede are staring each other down in a final duel. A Final duel where the two characters affection for each other overcomes their hate, and instead of shooting each other, they take out John’s henchmen who have hidden away in the background. Then they fight off John in one last blaze of glory. There’s a fine thread in the movie where the two lead villains, El Vasco and later Yodlaf actually evolve and take up new causes in life. They both walk from the path of villains, to become revolutionaries and fight for a good cause instead. Remember that Yodlaf early on in the movie says that he doesn’t care who he sells his arms to, as long as they pay. But in the final scene he revaluates his position and free of charge chooses to fight with the revolutionaries for freedom and a better future. It’s a neat detail that sets up a great climax to the movie. These evil characters come over to the good side. 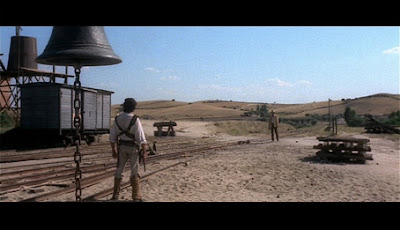 It's fascinating that so many small details planted through out the movie return at one point or another just to play a larger role than first indicated. It’s these small details that showcase the craftsmanship of Carlucci once again. There’s the arms wagon that Nero arrives in town with which later is his salvation from John’s bullets, the dollar given to Vasco which later becomes his lifesaver, the wealth and value of the people of San Bernardino which gets flipped upside down in a last surprise as the safe is opened up by Yodlaf, it all comes back very nicely bringing the threads to a satisfying payoff. And even though Corbucci lightens this one up with a few gags, and comic themes, there is still a dark sinister tone, and the theme of Greed saturates the movie. Everyone is driven by their greed. Their greed for money, power, dope, revenge, or simply for peace and justice.

Compañeros is indeed a grand Spaghetti Western, complete with top notch cast, one of the best Morricone soundtracks, beautiful cinematography, wonderfully edited by Eugenio Alabiso (just feel the pacing of those shootouts, frenetic to say the least.) that brings it all tightly tighter, standing the test of time and is easily comparable to some of Leone’s better movies. A must for fans of the genre.

Extras:
The 17 minute, In the Company of Compañeros where Franco Nero, Tomas Milian and Ennio Morricone discsuss the movie, the Theatrical Trailer and written talent bios.