GOKE, The Bodysnatcher from Hell 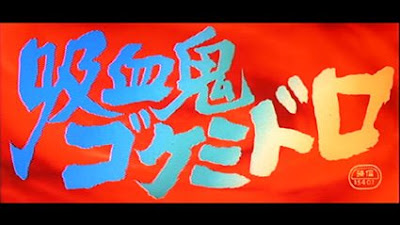 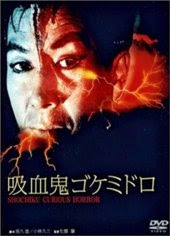 Story:
A Japanese airplane smashes into the ground after being startled by an unidentified flying object that destroys their flight equipment. The plane crashes into an abandoned area and the surviving passengers start to show their true colours. At the same time the strange object that they saw in the sky has landed and progresses its plan for the annihilation of earth. When a passenger escapes the wreckage and enters the spaceship he is attacked and after the alien being enters his body though a slit in his forehead, he is turned into a bloodthirsty vampire who goes back to feed of the rest of the plane crash survivors… 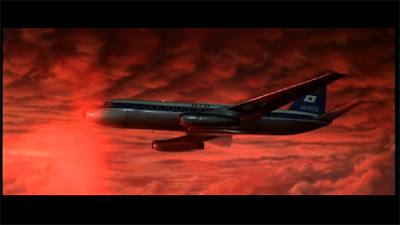 Me:
Goke IS an amazing piece of Japanese cinema that definitely needs so much more exposure and exploration. It is indeed an entertaining movie with so much more going for it than a lot of contemporary sci-fi horrors of the time had. Remember this is the late 60’s and the main theme of Japanese Sci-Fi was focused on Godzilla, Gamera, The Giant Majin, Mothra and other giant monsters crushing those wonderful miniatures versions of major cities. There are obviously a some exceptions The X from Outer Space (1967) to name one, but then again, those movies focus more on the “good men” of earth defeating the alien invaders. But GOKE goes further; there’s political commentary, there’s alien invasion, there’s vampirism and then there’s the social commentary. Almost everyone in this movie is a bad ass, with nothing more in mind but themselves. From the wealthy corporate arms dealers to the assassin [Hideo Ko] who uses their products, through the bomb wielding terrorist to the widower in grief on her way to collect her husbands dead body, from the uncanny psychologist to the space biologist, they all are disturbing selfish son of a bitches. That is all apart from two, the co-pilot Sugisaka [Teruo Yoshida] and stewardess Kuzumi [Tomomi Sato]. They try their damnedest to get themselves and everyone else through their ordeal and back to civilisation, which is why the shocking downbeat ending blows you away. 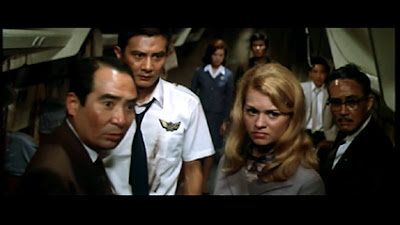 There is so much going on in this film that it’s almost impossible to take it all in on one viewing. First there’s the initial setup where the airplane flies through those beautiful red clouds, encountering suicidal birds, not quite understanding what is wrong with the “blood red sky”, this is a premonition of the coming alien invasion, but also works as a kind of warning light for what is about to happen. The plot starts to thicken and gets more complex when we learn that a British minister in Japan recently was assassinated, this is discussed by an arms dealer and his prospect weapons factory owner. The flight centre reports that they have received a note declaring that there is a bomb on the plane, and as they search the passenger’s luggage they stumble upon a small arsenal belonging to the assassin. In the middle of the search as goodhearted Sugisaka and Kuzumi make up excuses for the search as not to alarm the passengers, the psychiatrist stands up and declares that they might be searching for a bomb! He does this for his own scientific (or perhaps sadistic) intentions as it gives him an extraordinary situation to study the human psyche when opposed to a deadly threat. Suddenly the flying saucer attacks the plane making all the technical equipment and motors burst into flames. This gives director Sato an excellent opportunity to use all that great Japanese miniature photography so frequently used in the Kaiju movies, to show a very realistic shot of the burning plane crashing though trees and slamming into the ground. Pretty soon after they crash the true “terrorist” is revealed as he flees the burning wreckage to hide his bomb he still has to use. Now we know that the passengers are all pretty dubious characters, those who have been introduced pre-crash are the ones still alive after impact. Only Sugisaka and Kuzumi take time to put blankets over the deceased, as the others start bickering over the little water supplies left. The US widow on her way to reclaim her husband’s body uses up all the water left to wash herself after the crash, leaving the rest of the passengers without valuable fluid. 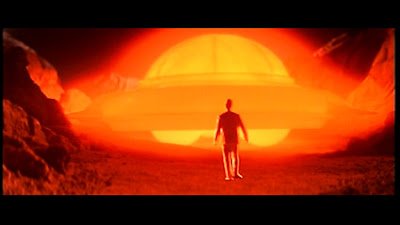 At the same time the narrative progresses there is a political commentary running through out the movie, from the “in flight” discussion about the assassinated British minister to the final “you are doomed” comments from the alien which ends with a collage of atomic holocaust imagery. The statements made by the two businessmen are quite obviously references to how the rest of the world is rapidly degenerating, and at the time of the movie the cold war was at it’s peak, Vietnam was coming to it’s pinnacle just as the Korean war was ending, Japan obviously felt very vulnerable as they where in the middle of a world itching to scratch, and even though Japan tried it’s hardest to show up the brave face of a neutral country with no further ambitions to make war, but focus on putting their past behind them, the movie shows that under the surface Japan is just like everywhere else with it’s fair share of egocentrism, escalated violence, and political terrorism.

Anyhow, the plane has crashed, the anarchy and paranoia runs astray. The Hijacking assassin kidnaps Kuzumi and rushes out into the desert only to stumble upon the glowing alien spacecraft. Not being able to control the urge to investigate it he gets too close and the alien mind force draws him into the craft. There in a room full of dark brooding lights the alien creature, looking almost like molten mercury creates a split in the hijackers’ forehead. That split in his head is an area of discussion, because it mostly looks like a vagina, and is frequently referred to as that in other reviews, and I could divulge into an analytical rant about Vagnia Dentate. Symbolism and all that comes with that, but I won’t and I’ll just refer to it as a slit in his head where the alien being enters his body. The alien life form turns him into a vampire and pretty soon he’s back at the wreck feeding off the blood of the decreasing number of survivors. One by one they fall victim to the space vampire and we learn more and more about the unlikeable cast and their terrifying egocentrism. The weapon factory owner turns his head as his wife is groped and molested by the arms dealer, as the profits of the pending deal ahead is much more lucrative for him than his family values. Mrs Neal, the widower takes a gun to the survivors to get her way through, and as previously mentioned they all show their darkest traits when confronted with the stalking terror outside the plane wreckage. But still, Sugisaka and Kuzumi try to keep the survivors’ spirits high but one by one they fall victim to the space vampire. Finally Sugisaka and Kuzumi go up against the alien life form, and seem to defeat it, but in reality the alien has only moved to a new host, and they are faced no further options but to run, run as fast and as far as they can until they reach civilisation. 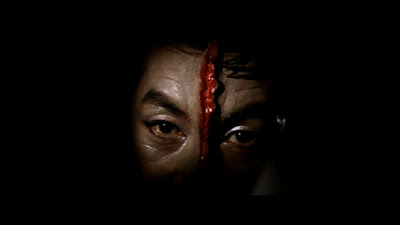 I love that all the major studios named their aspect ratios after themselves, i.e.: Tohoscpoe, Shintoscope, Nikkatsuscope and here GOKE produced by the Shochiku Company, shot in full glorious Shochiku Grandscope. On a pop cultural level, GOKE is yet another one of those movies that Quentin Tarantino nods his head to in his 2003 movie Kill Bill: Volume 1, just like the swordfight with is an obvious nod to Toshiyo Fujita’s Lady Snowblood from 1973. When the Bride [Uma Thurman] flies to Japan in Kill Bill: Volume 1, just check out those dramatically coloured skies to see what I’m talking about.

But if we’re going to talk about influences and references, it has to be pointed out that director Sato has stated that Mario Bava was a major influence on his career as a director, and it’s quite obvious when you see what art director Tadataka Yoshino and cinematographer Shizuo Hirase did with the amazing style and imagery of this movie. On more than one occasion does Planet of the Vampires come to mind. There’s also a lot of the pop-culture look and feeling of Seijuin Suzuki’s Nippon Noir movies in here too, with Hideo Ko's suave assassin turned hijacker in his white suit and black shades. Then there’s the wonderfully nihilistic reference similar to that found in The Planet of the Apes, as Sugisaka and Kuzumi finally manage to find their way get back to civilisation only to find out that the rest of the world has already gone to hell while they where missing. The camera pulls back showing a dying earth as the army of flying saucers proceeds to hover towards their latest conquest.

Unfortunately this was the last movie that Hajime Sato directed, although he did continue writing a few scripts. It’s a shame that he didn’t direct more movies because the few movies he did directed only get better and better with time, and when you start noticing all the influences and references there is a sublime indication that this director could have broken out and developed into a acknowledged master of the arts on par to Ishirô Honda, Jun Fukuda and Nobuo Nakagawa. But then again GOKE is an amazing movie to end your career on and in more than one way the swan song of a great director.