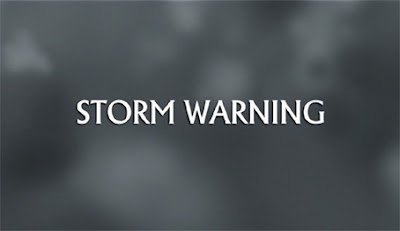 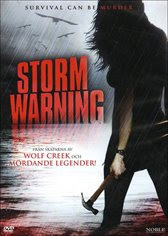 
Story:
A rich couple, Ro and Pia, hire a small boat for the day and plan to spent it fishing and relaxing on the seas. But a sudden storm forces them to seek shelter and they end up on an island with only one house to hide in. While investigating the house Rob stumbles upon a secret weed farm and understands that who ever lives there will not take lightly to their intrusion. At the same time Pia notices that there’s a pickup pulling up just outside the house, and the home owners are less than pleased to find them there. 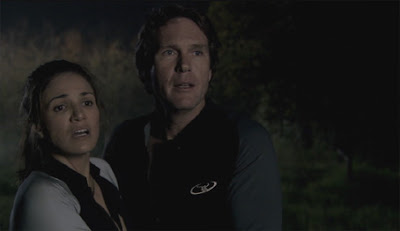 Jamie Blanks Storm Warning is indeed a very interesting movie, which after an initial viewing actually had me feeling quite satisfied, something I never expected as the narrative started to unfold. Being a wild blend of outback/hillbilly slashers like Texas Chain Saw, Hills Have Eyes, and Razorback meets modern torture porn in the style of the Saw, Hostel and Wolf Creek, Storm Warning toys around with gender roles and comes up with a few interesting surprises. And straight off the bat it has to be made known that this movie, even though it is made at the same time as those other T.P. movies (I hate that terminology and refuse to use it any more in this review.) it was in fact scripted by master of Australian genre cinema, Everett De Roche with movies like Link, Razorback, Harlequin and Patrick on his resume some thirty years ago when the Australian Exploitation genre was at it’s height. Also at one point in time, the movie was supposedly going to be helmed by Brian Trenchard-Smith. Worth pointing out before we get started is that director Jamie Blanks is one of those multi talented John Carpenter-ish creators who directs, edits and scores his own movies. The score for Storm Warning does it’s job and works with the movie, some parts are perfect, others less. But it’s not the score that is the main ingredient for making this a successful movie, it’s the cunning twists that are within that original script. It’s also a pleasure to see a director who has previously made a few lesser impactful movies like the decent Urban Legend and the tame Valentine, finally hit the nail right on the head. 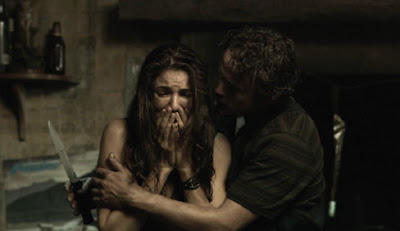 Anyhow, the movie chugs along at normal pace to start with, and you know from the setup that these two wealthy characters Rob [Robert Taylor] and Pia [Nadia Farès] are going to wind up in some strange place, and meet even stranger people, and have some really strange terrifying shit happen to them. It’s the premise for that genre. And they do, some fifteen minutes in, as they seek shelter from the sudden storm that darkens the sky, forcing them into land, or rather a small island. During this set up, an ordinary day out in a small boat fishing and taking up the sun, Blank’s establishes two important character traits that are going to be shattered during the course of the movie.

Aussie bloke Rob is a no crap guy, a barrister who after being forced to drop a case, tells his wife Pia that he’d in the blink of an eye “take the bastards outback and give them a good beating” if he only could. We now know that Rob is prone to violence. Then as the storm hits and the boat has to be dragged through a ditch to safety, it’s Rob that gets in the water. He’s not only prone to violence; he’s also a man of action. At the same time Pia, Rob’s French artist wife, makes very clear arguments that she is sickened by the system that let’s criminals walk free, and as they catch a fish, she is appalled by the way Rob clubs the fish to death with a champagne bottle. We now understand that Pia objects to unfairness and violence, even if it’s just as simple as killing a fish on a hook. 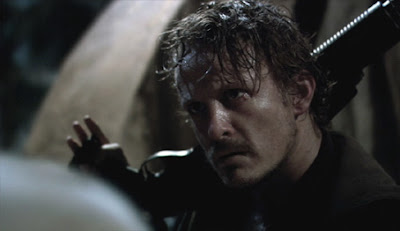 Both those statements are twisted around and shattered later in the film as they stumble upon the house and the warped family that live out on French Island. All along you think that Rob is going to rise to the occasion and bring about the downfall of the three family members that hold them captive, threaten to rape Pia, and take their lives. But he doesn’t. He’s all talk and no action when push comes to shove and as he lies passed out with a broken leg on the floor of the barn Rob is certainly not the hero character we have been led on to believe. Instead it’s Pia who takes it upon herself to find that inner strength to fight her way out of this nightmare. She’s just killed a small wallaby to prove that she loves Rob, as the bad guys where about to cut off his balls unless someone killed the little animal for dinner, so she has now put her values at stake, she can kill if she needs to. And she will. In a nutshell it’s Pia who takes out the villains and makes their escape possible, and she does it in three very, very innovative ways that had me right on the edge of my seat twice. One guy is strung up in a terrifying trap made of fishing rods and hooks, and as he hangs there Pia beats him to death with a hammer, she runs one guy into the back of a giant propeller as he tries to smash the window of the car she’s trying to escape in, and Poppa, the lead baddass in this movie is first castrated by the most vicious vagina dentate ever, as she crafts her own anti-rape device with the help of a jar and it’s cap. If you are male you are going to squirm in that sequence. 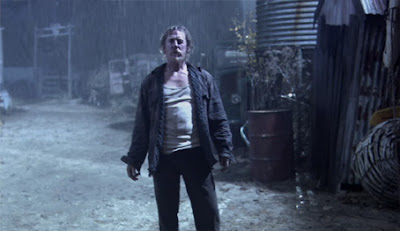 Movies like this are nothing without their villains, and the villains here are all top notch. They are pretty far down the road of insanity and their strange relationship to each other is important here. Poppy is the father of the family. Fiendishly portrayed by John Brumpton, he certainly makes for a menacing father figure. It’s quite obvious that the two sons Brett [Mathew Wilkinson] and Jimmy [David Lyons] are terrified of him, and that’s also why there is a natural pecking order between the two sons. The father takes shit out on Jimmy, Jimmy beats Brett.

Let me linger for a moment as I talk about Jimmy. David Lyon’s performance as Jimmy is stunning. He is just fantastic, and the way he made this character come to life on screen is fantastic. He little twitches, the fast replies to the other characters dialogue, his teasing of Pia, throwing in French gargles here and there is wonderful. I’m sure that if there was ever a plan for a Storm Warning 2, the Return to French Island, Lyon’s Jimmy would have to be back, resurrected from the dead to continue his trail of death and sadism. It’s also hilarious that Lyon went from this sinister murdering psycho to end up as a regular on the last season of the TV show E.R. From menacing killer, to helping doctor that’s a transition that made me laugh the last time I saw him on E.R. and it was tricky not to see him just as Jimmy in a lab coat. But what a performance. Great stuff indeed. But then again the acting in the movie holds a very high level, and all the actors are very impressive, perhaps that one could have wanted more from Nadia Farès character, but being semi nude with an all male cast may have been intimidating. Especially when three of them are telling you that they are going to rape you and then kill you, acting or not, it’s definitely a menacing scenario. 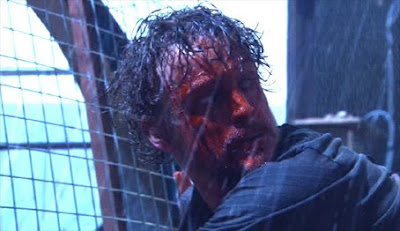 All three of the antagonists are very menacing, and do their best to come off as evil, vile sadists, and it works, they really are despicable. And the fouler you antagonists are the more violent deaths you can give them. It’s psychologically validated, unless you let them kill off all the protagonists which will leave you with a valuable anti hero instead! This is also the second important ingredient for the twist that comes when Pia starts to fight back. Usually you have your protagonists trying their damndest to make it to the end of the movie alive, but still they are one by one picked off and finally you get the lucky survivor making a final successful dash for it. But what differs De Roche’s screenplay and Blank’s movie from the rest is that all male characters in the movie are impotent! They never kill, maim or butcher anyone (Well there is that guy in the red tracksuit early on in the movie, but that’s mostly off camera, and more of an indicator to set up how potentially dangerous they can be.) Instead it’s Pia who kicks ass, tortures, maims, beats and murders the victims in this movie. The single white female pushes genre convention aside and from the moment when understands that she can’t rely on her dope of a husband becomes the Femme Fatale Killing Machine. She even leads the antagonists on before lureing them into death. Just like a praying mantis. And that was honestly surprising; I never could have seen that coming. I was certain that she’d be the survivor, but not before witnessing her hubby being killed and her at least raped, beaten and put though hell before she would make her last dash. It’s a refreshing move, even though the script is 30 years old, and could quite possibly be what makes Jamie Blanks Storm Warning one of the best movies in this genre so far.