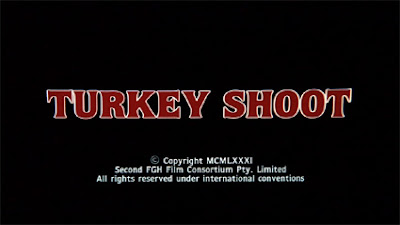 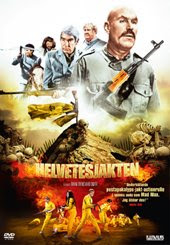 Story:
In a not so distant future, prisoners are sent to camps for re-education and behaviour modification. Radio Freedom host and wanted man, Paul Anders, with three previous successful escapes on his record, is placed in the dreaded Camp 47 together with Chris Walters and Rita Daniels because of their political opinions. There they quickly learn that you play by the rules of Camp Commander Charles Thatcher, and if you don’t you will be punished in front of all the other inmates by big bad Chief Guard Ritter. After a harsh introduction to the atrocities that take place at Camp Thatcher; Chris is abused and practically raped by the guards before being saved at the last moment by Paul, just released from being stuck in a cage and hung up in the burning sun upon arrival just because of his list of previous incarceration escapes, Paul lets partners in imprisonment Chris and Rita in on his plan to escape! But unbeknown to the brave freedom fighters, fiendish Warden Thatcher has planned a little game for his acquaintances in high government positions. A terrible game where selections of the inmates are to be hunted down and killed, just for fun. 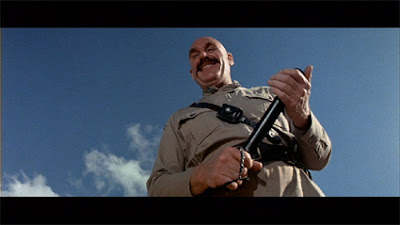 Me:
Don’t you just love “not so distant future” movies that are supposed to have near future feeling to them when they where first released (in 1982) but then some thirty years later just makes you laugh because of their “campiness”? Brian Trenchard-Smith’s Turkey Shoot, is no exception, but still an interesting piece of Australian cinema. Getting in on the “future” trend in Australian genre cinema of the time Turkey Shoot is a decent re-imaging of Irving Pichel/Ernest B. Schoedsack’s 1932 movie The Most Dangerous Game, it makes great late night entertainment as they weave in minor subplots, violent death, obligatory “shared gender shower room” nudity and some really campy super villains to the gritty movie. That, shared gender shower room, perhaps it’s a kind of “all criminals are of the same low value” sort of statement? Anyhow Turkey Shoot is a wild ride indeed, and you have to agree that Alph the Apeman [Australian Wrestle Icon Steve “Crusher” Rackman]who takes part in the hunt as Tito’s [Michael Petrovich] choice of weapon is one of the true highlights of this movie. Anyone who could ever have come up with the idea of an ape-man in a shredded tuxedo definitely gets a round of applauds from me. It’s one of those creepy, hilarious images that make this movie stand out from the rest. As we are presented to the three lead characters, the tone of the movie is set firm when we witness two violent public executions held in front of all the other inmates as to scare them into submission, Thatcher and his high society friends start plotting out the details of their coming hunt. They watch over the inmates and choose their target subjects. Ever the smarmy politics man Thatcher gives them the fake deal; if you take part in my little game and survive the day I’ll let you go. He even hands out identity cards that they can use back in the free world. This is obviously received with various reactions. Then the day of the chase comes and the hunted are given twenty minute head starts before the hunters are going to start tracking them down. And that’s where the movie really gets going, as the chase proceeds and the violent carnage begins. Running through he jungle unarmed being chased by goons armed to the teeth is definitely exciting entertainment. There’s a excellent sequence where Thatcher takes shots at Paul on the other side of a ravine with a sniper rifle, Chris encounters the vile warden who previously tried to rape her, but as there’s no Paul around to save her this time she’s forced to kill him, hence abandoning her pacifist values and become a killer herself. And no film is complete without a final showdown, where the bad guys get pay their dues in violent graphic deaths one after the other before the camp is trashed by death from above as bombers take out the remains of the camp during the last shoot our between convicts and jailers. 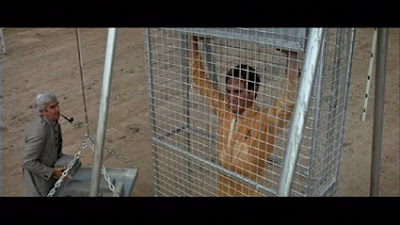 Although in some way’s there’s not quite as much empathy for the band of rouges trying to stay one step ahead of Thatcher the tyrant and his band of happy hunters, as they mainly are only basis for gory deaths, apart from perhaps Olivia Hussey’s Chris and slightly Steve Railsback’s Paul, but he’s just a tad to smarmy for me to really identify with. Don’t get me wrong he is a chilled hero character very true to exploitation measures, and he makes the most of the part, but still I never quite like him enough to root for him. Perhaps it’s due to the selfish attitude he has during the first part of the film. If he really was a true freedom fighter, wouldn’t he want to break everyone out of the camp? Then again he more or less does in the grand finale, so there’s some sort of justification here. Back to Hussey, she made this one right after completing Ivanhoe, and she is really low key and naïve in this movie which can be somewhat annoying, remember she is only arrested for objecting to the beating Paul gets when he wounded runs into her store and falls on the floor before the “police” rush in. as she objects she’s accused of sympathising with the dissidents and is taken into custody. But her naivety makes that character arc in the end so much finer when she together with Paul blasts her way through the guards of the camp with that heavy machine gun, freeing all the prisoners.

But the most entertaining characters in this movie really are the villains, led by Michael Craig’s Commander Thatcher, he’s vile, evil, sinister just as your tyrant’s should be, and he sees no problem in making paradoxical statements as he runs his camp, twisting and bending just to prove his point. Like the rules you get the feeling that he makes up as he goes along just to yet again find opportunity to torture the inmates “Freedom is obedience, obedience is work, work is life. Well, now understand once and for all that the reverse is also true, Disobedience is treason, treason is a crime, crime will be punished!' But no evil commander is complete with out his band of henchmen, and Thatcher really has a great ensemble of evil subordinates to back him up. The immense threat that actor Roger Ward makes as the sadistic guard Ritter is great, he really stands out as one of those guys you wouldn’t want to be around because you might get a punch to the back of the head at any moment. Just the sinister sneer on his face topped off with that Prussian moustache just makes him a perfect evil warden. Then there’s the sadistic and lethal femme fatale Jennifer [Carmen Duncan] who takes to horseback during the hunt and armed with her arsenal of crossbow arrows tracks down the hunted before going one on one with Chris in a very tense scene where her S&M tastes are on display “You’ll be safe here! I’ll take care of you!” as she thrusts an explosive crossbow arrow towards Chris face! 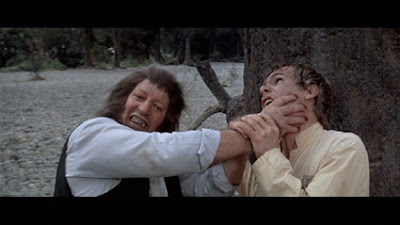 Two things that have to be pointed out with Turkey Shoot is its executive producer (one of them) , or more know as the actor David Hemmings. You will know probably him from movies like Antonioni’s Blow Up or Vadim’s camp epic Barbarella. Anyhow after a run of films in Italy (among them Argento’s majestic Profondo Rosso and Castellari’s Heroin Busters, he followed these up with a decent batch of movies in Australia and New Zeeland, where he not only acted but also held executive producer roles and in a few cases directed a whole bunch of them. (He later directed a whole load of TV series like Magnum P.I., Airwolf, Murder She Wrote, The A Team etc. and was no novice to directing at this time either.) You have to make note of the great soundtrack by the late Brian May who also composed the soundtracks to several other great Australian Exploitation movies, Patrick, Mad Max, Thirst, Harlequin and Mad Max 2 to name but a few.

It comes as no surprise that director Trenchard-Smith gives a few pokes at the old motherland while shooting films in Australia, hence the main villain being called Thatcher , a somewhat political allegory to the at the time current state of the U.K. This is made very clearly in his use of authentic riot and political clash footage in the opening of the title sequence. Then there’s the obvious comment on the state of things where the “dissidents” being persons who hold different belief’s i.e. Paul, the radio Freedom fighter, Chris, the pacifist who objects to the needless violence and Rita, [Lynda Stoner – what a great name!] who refuses to being labeled a whore just for making a living, are carted off to be re-educated and reprogrammed to fit into society, only to be confronted by homosexuality (is it only me or does Thatcher have that vibe?), sadism, masochism, the perhaps worse crime of all the lack of respect for human life as they are chased through the jungles like animals for blood sport. It’s a great irony that many of the contemporary movies lack. 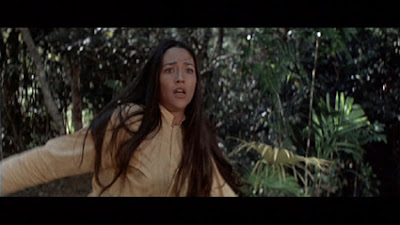 Extras:
A great audio commentary by director Brian Trenchard-Smith who discusses what he calls “A Train Wreck of a Film!” and gives a very entertaining insight into the movie, an alternative opening sequence, a poster gallery, stills gallery and the original trailer. Also there are trailers for Patrick , Pariah, Last Hunter, New Barbarians, Blue Sunshine, SS Experiment Love Camp and SS Camp Woman’s Hell.