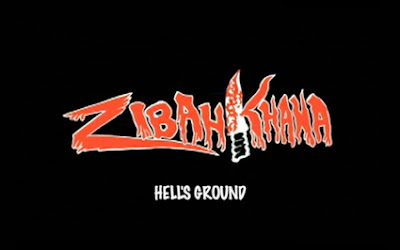 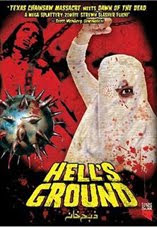 Hell’s Ground
Original Title: Zibahkhana
Directed by: Omar Ali Kahn
Pakistan/UK, 2007
Horror, 77min
Distributed by: Mondo Macabro
Generic horror - despite how predictable and cheesy it can be, you still have to admire the power that the simplest of structure can have for a genre movie. Omar Ali Kahn’s Hell’s Ground is generic horror with obvious nods to Texas Chainsaw Massacre 1974, Friday the 13th 1980 and the zombie flicks of George A. Romero. But apart from using a generic formula, the originality here is that it’s a coriander flavoured Urdu-English movie from Pakistan. 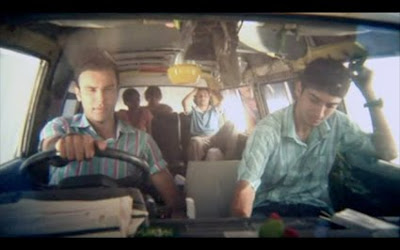 A bunch of stereotypical characters, the flirty, the momma’s boy, the dopey yeah, you get the picture are presented one by one as they lie, trick and deceive their parents and take off on a road trip with getting stoned and shagging as their final destination. Their road is obviously one long series of ordeals such as, finding the right road, making it there before dark, fleeing from mutant zombies and later fighting off a Burqa clad murderer. You know the drill, one of them goes to look for something and after a while the others go searching and true to formula they start getting killed off one by one and the ending comes with a by the book last moment surprise twist and one last scare. 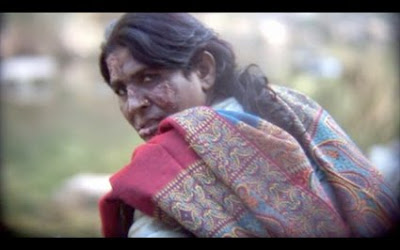 Apart from some obvious nods to US genre films with a Maniac poster in an early scene there ‘s also the product placement showing covers of Mondo Macabro DVD’s Bandh Darwaza (The Closed Door) 1990 and Zindra Laash (Dracula in Pakistan/ The Living Corpse) 1967 from which a clip also is seen on the dopey genre fan’s television. That scene is also a great build for a small part by Dracula in Pakistan star Rehan who later turns up in the movie as the traditional “town imbecile” warning off our young band of protagonists. Every generic flick that plays by the rules needs an omen character, Rehan is Hell’s Ground’s demented voice of reason. 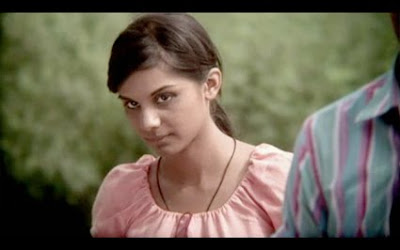 It’s a fun movie that plays with a lot of generic slasher film traits. Remember that you never ever drink liquor or do drugs or get laid because that’s gonna put you right on top of the shit list and it’s exactly what happens in Hell’s Ground. Not that anyone get’s laid, but you know from convention that dope fiend O.J. [Osman Khalid Butt], cocky jock-type Vicky [Kunwar Ali Roshan] or sexpot, Roxy [Rubya Chaudry], are amongst the first to meet their maker. Nobody get’s their kit off in Hell’s Ground, but I’ll write that off as playing it safe for a Muslim audience. Finally it’s down to the innocent and kind of helpless Simon [Hadier Raza] and there’s always a final girl, Ayesha [Rooshanie Ejaz]. It’s a rather predictable, but enjoyable dot-to-dot puzzle that has a few really fun tricks up its sleeve. 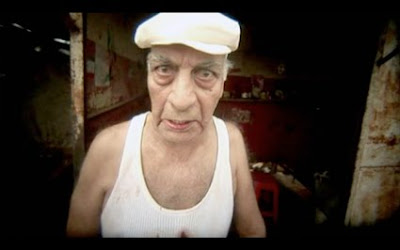 Getting back to those generic slasher horror traits… This movie is filled with smaller ones too, like sneaking off to be with mates, hiding the “sexy” clothes, lying to the parents, watching horror flicks and smoking dope. We all know that lies, deception, drugs and sex are under penalty of death in generic horror. 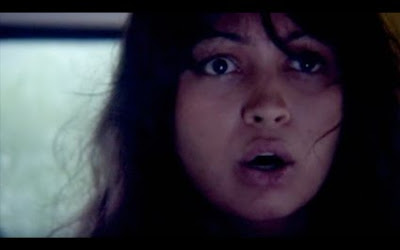 The movie opens with an obligatory intial attack setting the tone of the movie and declaring the genre we are in - horror. There’s the genesis of evil – a tricky one as Hell’s Ground has two protagonists, both the toxic waste created zombies and the killer in the woods. There’s a warped family back-story, here it’s the tale of a woman who see’s one of her sons become a cross dresser “you loose a son, but gain a daughter” and being a Muslim themed movie, I would say that the non-acceptance of cross-dressing is what drives him to the edge and makes him kill anyone who comes near him, or her, as his secret could lead to his, or her, own death. 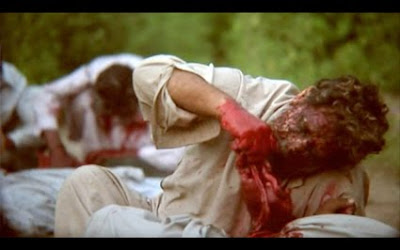 A favourite highlight among many, is “brother” Baley [Salim Meraj] hitching a ride from the young kids and completely taking over Edwin Neal’s Hitchhiker character from the original TCM, and making it his own in a fantastic way. It’s an excellent moment and a brilliant homage. 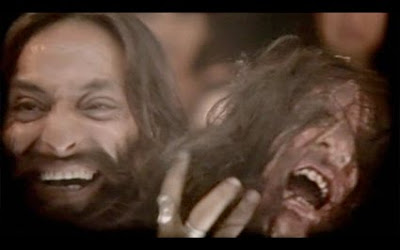 As with most generic horror the movie relies on a morality complex, of which it would be true to say that Hell’s Ground has two that it builds off. The first being industrial pollution that creates a lethal army of undead-like zombies, even a dwarf zombie. Obviously this could be a comment on industrialism in areas like Pakistan and India, where conglomerates exploit the area and dump there waste where ever the hell they want causing serious damage to land and people. The second a fair warning – Don’t do drugs, don’t mess around, don’t have sex (or fool around with gender roles) or else you will end up dead! It’s generic horror storytelling, it works like clockwork, and it’s a complete fucking fun rush of gore, death and Punjabi beats. 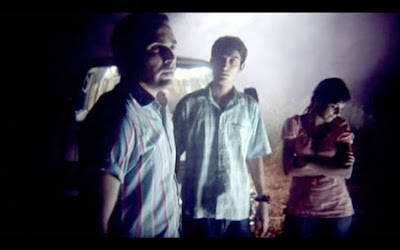 Apart from a majority of brilliant traditional music featuring artists like Noor Jehan and Nahid Akhtar there’s no disadvantage of featuring Stephen Thrower & Simon Norris Cyclobe on the soundtrack, fittingly enough their Strix Nebulosa is used under the scenes of chemical waste and protesting Pakistani people - industrialism in more than one way.
The pacing of Hell’s Ground is fast and ferocious as the movie never really lingers on too long in any moment, and the camerawork is delightful with the most inventive use of a fisheye lens I’ve seen in ages. 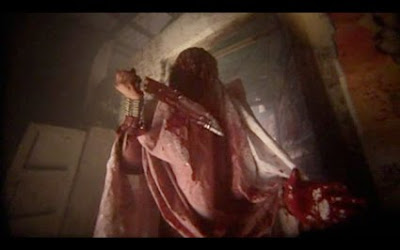 The mondo macabre connection is obvious, and who better to get into the field that dvd company and book author Pete Tombs and Andy Starke. After all they have been distributing and writing the definitive texts and releases of weird world cinema for the past decades.
Two fun pieces of trivia concerning Hell’s Ground: Director Omar Ali Khan runs a couple of organic, homemade ice-cream shops in Pakistan where the interior is mostly horror memorabilia oriented and he’s currently in pre-production for a second feature to be shot in the last quarter of 2011. 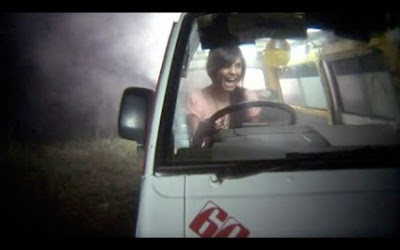 Final note: rumour has it that Swedish wildcat’s NUJTAFILM will be releasing a double feature with both Hell’s Ground and Dracula in Pakistan, a release to look forward to if there ever was one!
- April 18, 2011

Excellent review as always! One more fact about director Omar Ali Khan: He runs the bloody best review site for Bollywood and Lollywood genre films!! I actually believe he does all this with his brother so the bro should be credited as well (but he keeps his brother in a basket so...).

Oh, and one more thing: The Njuta DVD is listed on their page so it's more than just a rumour. It's a joint release with AWE and they're releasing another Mondo Macabro title as well - but I can't reveal which title (cos I forget, haha).

Dracula in Pakistan is rather cool, I did olden goldies, and that one's right up my street.

Yeah it is a bloody fun movie, and thanks! :D