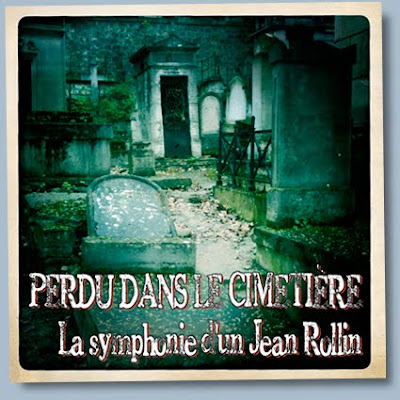 It’s time for a new CiNEZiLLA mixtape, and this time I have spent my precious time cutting, splicing, pasting and looping the soundtracks of Jean Rollin. You can grab it in a moment, but first I have a story to tell you.

My wife just celebrated an important birthday, and when asked where she wanted to go, she said Paris. This was our first real trip abroad for almost a decade, a well deserved one and Paris is a city that I’ve wanted to revisit for a long time. 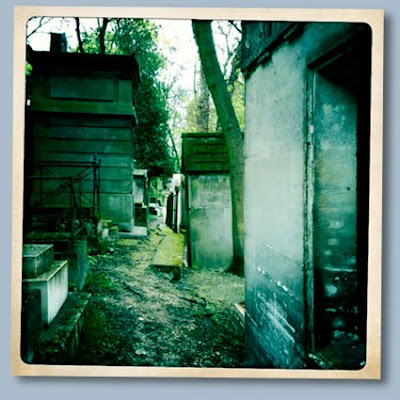 Going back to Paris for the first time in more than fifteen years I was determined to return to the Père-Lachaise cemetery with an agenda of seeking out the resting place of Jean Rollin.

Spring had hit Paris, and the Père-Lachaise cemetery was covered in a green leafy drowsiness, the weather served up a gentle rain drizzle and cloudy skies creating something of a dim lighting not to unfamiliar to that of a light summer night.

From the pages of the latest Video Watchdog, I knew where Rollin was supposed to be (concession 168, land registry 484, 27th division) and a somewhat familiarity with the cemetery I though it would be a fast in and out action to pay my respects to one of my most favoured directors. Armed with a map pointing out all the celebrity graves, except Rollin, and my playlist of Jean Rollin soundtracks in my headphones, I started my own search within in the cemetery Rollin had used in so many movies over the years. 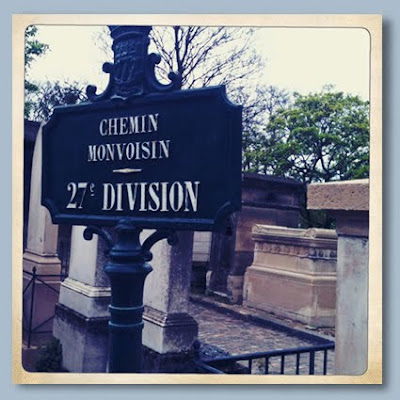 Finding division 27 was no real obstacle, although getting a grasp of where exactly the borders between the divisions was, some are clearly marked by paths, others are not and bushy areas simply flow into each other making it difficult to realise when one has gone too far and well into an adjourning division. This happened on more than one occasion and I found myself way past division 27 and far into some other division in the 40’s. Then there’s the problem of actually finding the correct spot. If you have never been to Père-Lachaise, then it’s hard to imagine the logistics of the place, if there even is one. The rational grid structure that one would have thought to have be the backbone of a cemetery is non-existent. Père-Lachaise, much like London’s Highgate Cemetery, is jumble of new, old, large, small, structure and chaos within the cemetery gates. Plants grow wild, trees sprout from tombs, next to a contemporary gravestone, there can easily be a cracked slate presenting glimpses into a deep webbed hole right next to each other. Well tended graves stand next to moss covered, broken, toppled and damaged graves, family tombs stand aside with monuments and simple lots with a mere simple cross marking it’s site. It’s a dreamy gothic flavoured location that triggers the imagination and it’s easy to see why places like these where favoured – and still are – by low budget filmmakers. These locations contain more production value than any set designer ever could come up with. They are authentic and that shows in the movies shot there too. 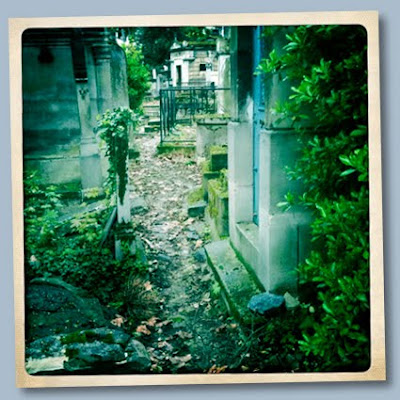 Walking the narrow passages, climbing steep, narrow overgrown staircases, squeezing through tight passages to get to graves behind, it was almost like being in a Jean Rollin movie. I was at times expecting to see the two twins come walking along the path, or a figure hide in one of the tombs, or find Nathalie Perrey sat mourning at a unmarked grave.

After almost two hours, my family gave up. We couldn’t locate anything with a marking of concessions, land registries or even a name that could match. Nothing, not Jean Rollin nor his full name Jean Michel Rollin Roth Le Gentil, nothing, not on any of the graves, not on any of the family vaults, not on any of the monumental tombs, nothing. After a brief lunch they took off and I returned to the cemetery, still determined to find where Rollin was resting. 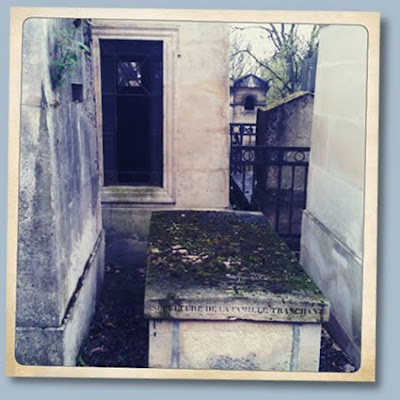 I asked the staff at the cemetery, but even they seemed to have some trouble pinpointing where the plot was. despite in my terribly limited and tacky French I was now quite assure that division 27 was right. So I returned to the location and started all over again. Another two hours later, the light was dropping and a cool breeze swept through the cemetery. I don’t think that there’s a single inch of division 27 that I didn’t cover, search and roam over in my search. As said, there where no markings that indicated to Rollin and I was starting to feel low as I had imagined that Rollin’s final resting place would at least be marked in some kind of manner when compared to the other “celebrity” graves, although I could find nothing. Although amongst the lots in division 27 there was one very simple grave and the first time I stumbled upon it my heart sank to the ground, this could not be the resting place of Jean Rollin. Outlined by twigs and sticks, a rather rough spot where grass grew wild, and a rock merely a two fists in size laid as a headstone, this was the only spot that actually felt like it could be Jean Rollin’s place. Now there was a name scrawled in white paint on the rock, and it wasn’t Rollin’s name, but that of a woman, Jeanne. Now I still can’t say that this wasn’t the spot as the rock could just as well have been left by a fan, who like me was searching for Rollin. Common sense made me revaluate and convince myself that this couldn’t have been the place I was looking for, but then there was one last clue that caught my eye each time I walked past the modest grave… 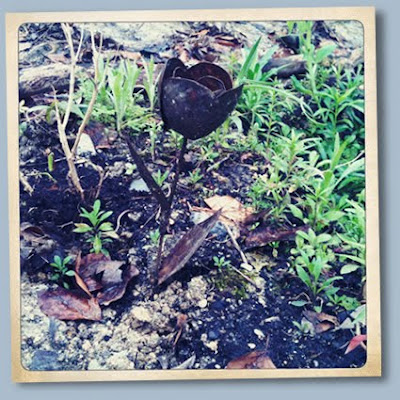 Being familiar with the symbolism, iconography and traits of Jean Rollin’s movies, movies that where very much him, that rose was undoubtedly the single item with the most Rollinesque aura to it in the whole division 27. This token was for me as certain an referent as the bottles of whiskey on Jim Morrison’s grave, or the torn out pages of De Profundis laid on the tomb of Oscar Wilde, a deliberate gesture, a magical totem that joins fan and master in some post-modern ritual.

I can’t say that this was the resting place of Jean Rollin, but that spot and the many hours spent wondering that small division 27, where what I needed. I needed to go there and pay my respects, I needed to be in the presence of Jean Rollin, because I missed the occasion to meet him in the flesh not only once, but twice. In all honesty I felt kind of sad when it looked like I was going to have to leave without finding what I was searching for. But after walking that lot back and forth for several hours, listening to the soundtracks, searching for something, it didn’t really matter if that spot was his or if it was any of the other unmarked graves that I took photographs of. I found something and I felt content that I’d achieved what I set out to do, pay my respects to the great Jean Rollin. 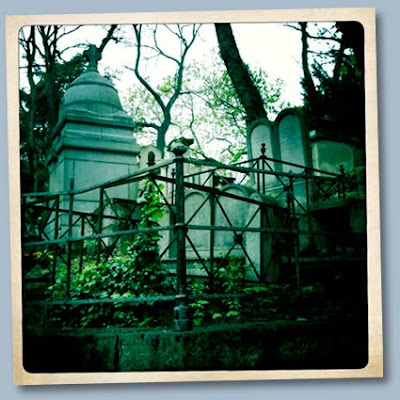 For a few hours I was in his presence, that dreamlike cemetery magically put me in a Jean Rollin movie. It was a few unreal, weird and maybe even pretentious couple of hours, but for me it was one of the most emotional and genuine moments in a very long time. For me that lone iron rose was the confirmation that I needed, that lone rose was the sign that I was looking for. That iron rose was as close to Jean Rollin as I will ever be.

To celebrate the fantastic legacy that Rollin leaves behind, I present you with the latest CiNEZiLLA Mixtape: PERDU DANS LE CIMITIÈRE - La symphonie d’un Jean Rollin

Enjoy it my friends. 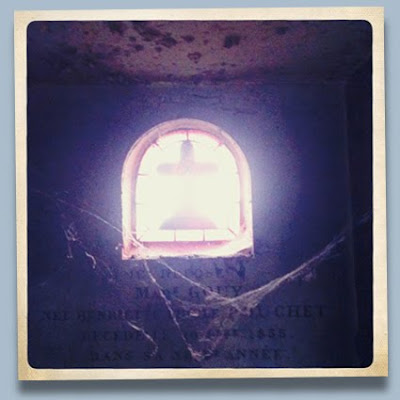 POSTCARDS FROM HELL - The sounds of Lucio Fulci 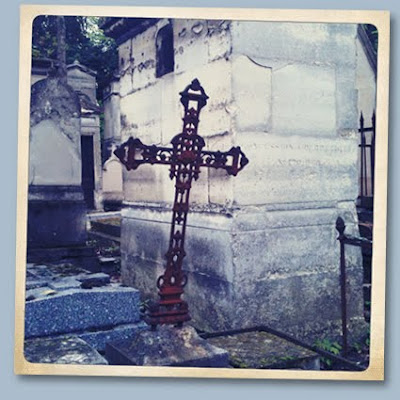 Thanks man, jamming to it now! Hopefully it helps inspire some drawing time today. That story is great too. I also would've been keeping my eye out for the twins haha!

Thanks so much for this! I have just posted a link over at Fascination for you. This is an amazing read and the mix sounds awesome! BRAVO!

Thanks Fukitor! Great if it inspires you! I'm looking forward to reading more of your wild art!

Jeremy, thanks mate! Hope you enjoy it! :D

So nice to read something film-related which is not just a review.
Texts like this are treat.
Just downloading the music now!

Great article! If I'm not mistaken though, I think the soil has to settle or something to avoid subsidence before a permanent headstone can be laid? This can be up to a year. So maybe something will be put up for him next year?

Geeky,
this may be true, I wouldn't know.

But there where other graves with stones on from December 2010 and even one for Feb2011... So I dunno. But I'd guess you have a point, and I'll have to go back next year to find out.

That was SO beautiful, I nearly teared up. Well done! Viva Jean Rollin!

I'm glad you enjoyed it!

Lovely article! Eager to hear this and all of your mixes, but do they have a new home online since the demise of Megaupload?

Andy!
I just re-designated them and added them to the sidebar.