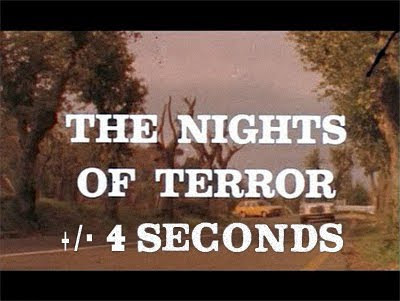 This just in...
There's been a few days of turbulence in the inner circle. Turbulence concerning internet forum rumours that claim all current releases of Andrea Bianchi's seminal sleaze-zombie epic BURIAL GROUND: The Nights of Terror are missing a vital four seconds of gore. There's even a given play time for exact where the extra seconds of gore are to be found [40min, 58sec]. Taking variations in NTSC and PAL runtimes several sources have been checked, notes have been taken, discussions have ben had and comparisons have been made. Both amongst friends and my own personal research on the several versions I own of the movie on DVD - Keep in mind it's the DVD's that are being accused of lacking four seconds of gore.
It's fair to say that the US Media Blasters/Shriek Show, Scandinavian Njuta Films/Another World Entertainment and Dutch Japan Shock all use the same master elements. Despite a varied selection of framing, contrast and brightness, they all have damage in the same area in certain scenes. 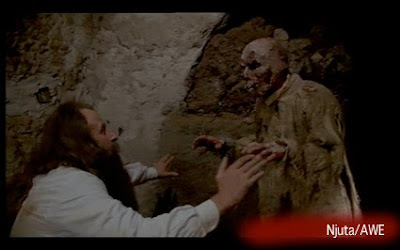 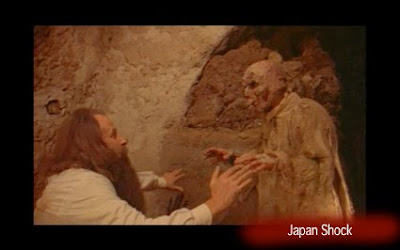 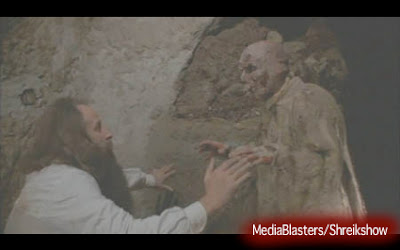 I'm quite convinced that they all originate from the same master source. No hard evidence except comparing scenes, damage and watching movies for 40 years.
Which leads us to the rumoured, real uncut, Japanese TCC Video that has the now infamous four seconds of gore... for that is what is claimed by certain characters on movie forums. Four seconds of gore, supposedly a head crush.
Let me set this up for you: 39:00 (minutes into the movie) James [Simone Mattoli - our moustachioed friend] walks down a corridor only to find the corpse of the maid [Anna Valente] hanging out through the window. At 39:30 he's right up close to her and gags as he pulls back in shock. 40:00 after seeing the zombies below, he tosses her body out the window and she hangs from the nail hammered though her hand earlier like a human piñata as the undead pull at her legs. 40:30 they pull her loose and start to chomp into the dead maid. 40:47 James starts to pull back from the terror and closes the shutters. He let's the horror sink in and the movie cuts to an extreme closeup of the maids guts being torn out. Now somewhere in that mere two minutes of movie mayhem, [40min, 58sec] the missing four seconds are found on the Japanese VHS... oh did I mention that the four seconds are either essential gore or a head crush?
Take a look at the screen grabs below and see the real difference in the three DVD releases and the Japanese VHS. 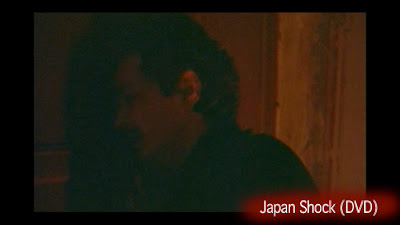 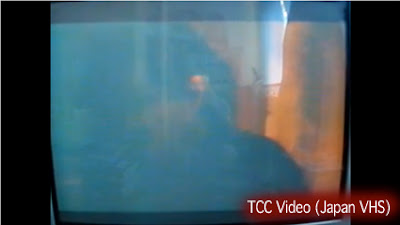 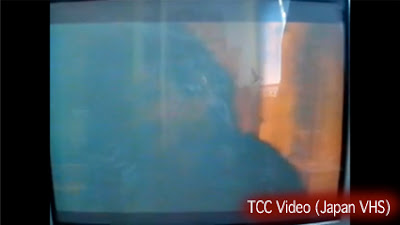 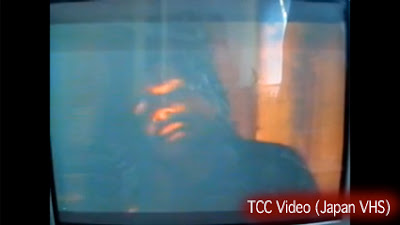 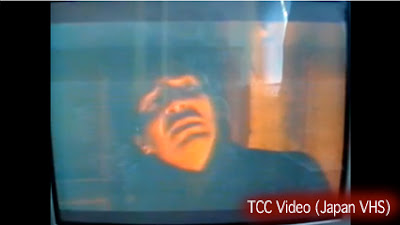 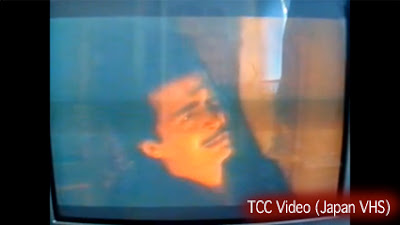 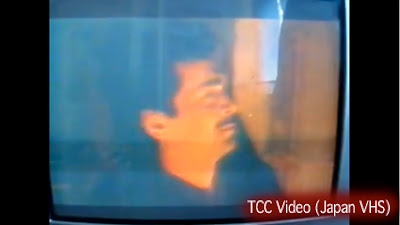 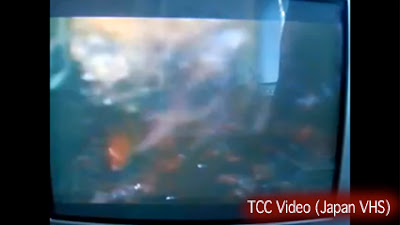 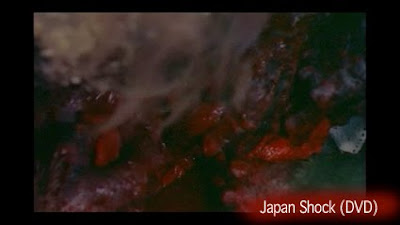 I rest my case, the rumour is busted. There was no gore, no head crush, no secret moment that changes the entire viewing experience, but merely a tender moment where actor Simone Mattoli having a delicate moment, reacting to the atrocities he's witnessed. Four seconds of leaning back on the shutters and being a complete wimpy horror movie character.
Thanks to Jack J for taking the time to video his UNCUT Japanese vhs and posting it on the old You Tube.
- June 06, 2011

Pleased you liked it!

Awesome!! Thanks for the break down... The Followers of The Profecy of the Black Spider thank you for your diligence!

You are welcome Gent's, and thanks.
We can't have erroneous things said about ye Olde Prophecy of the Black Spider now can we.

I tried to tell everyone the scant seconds weren't anything worth discussing, but no one wanted to listen! Thanks for the thorough comparison!

Apparently the upcoming blu-ray has some never-before-seen scraps of footage left over from the original production! Wonders never cease...

LOL, should be, but being middle of the knight and damned spiders all over the keyboard I missed the faulty spelling.... :/

Don't worry, you are a knight alright. Knight of the Four Seconds. LOLZ.

But in any case my ravings made Jocke Andersson buy a Japanese video tape so that makes it all worth it! xD xD xD

still doesn't go to say that there can't be gore missing from the movie, but if so, it's not there.

Great Post! I don't know why but I still haven't seen Burial Ground. I must be a idiot and after this top notch post that will be my next move!

Check out mine if you got the time!