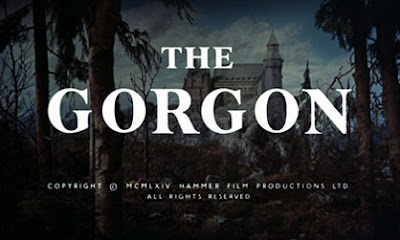 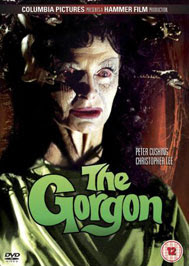 I can’t really understand genre fans that don’t like Hammer films! How can you not like Hammer films? For years I’ve been fucking annoyed that watchers of genre cinema all seem to be so polarized, they either only want the gore, the violence, the nihilistic carnage, or even worse, the ones that draw a line with The Exorcist, Jaws and Alien and determine that everything beneath them is automatically unwatchable trash.

Well obviously these people are not really fans of genre cinema. Let's just say that they like a few quick scares, and keep Hollywood in business. Fans of genre cinema take it all in, and leave no rock unturned in their search for the next thrill. The audience above are joined by the fact that they completely ignore the fluff… whilst supposedly claiming to like genre cinema. Well, the fluff is really what makes it all worthwhile. It’s the stuff that keeps the really good from the really bad. It's within the realm of the fluff where the important movies really are found. Such as the Hammer films. Looking at them historically the Hammer movies where the first gore films. Yeah, screw Hershell Gordon Lewis, screw the Japanese Chanbara flicks, Terrence Fisher’s The Curse of Frankenstein 1957 is the first splatter flicks. When Peter Cushing’s Baron Frankenstein shoots Christopher Lee’s creature in the head with a shotgun and Lee holds his hand up to his face as the blood pours out of the concealed hole in his head, it was deliberate. When Lee’s eyes turn red and the blood seeps from the side of his mouth in The Horror of Dracula 1958, Fisher with makeup artists Phil Leakey and Sydney Pearson knew exactly what they where doing and knew that they where pushing the limits of things… and they created a complete new horror ingredient that people had never seen before, which in it’s own turn made Hammer Studios the minor success story that it was to become. 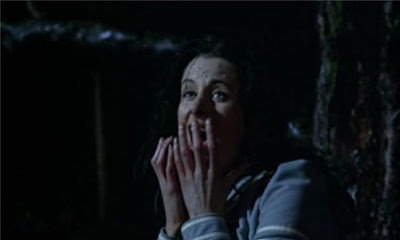 Terrence Fisher also helmed 1964’s The Gorgon based on a script by screenwriter/director John Gilling – who would later also direct some of the better later movies for Hammer, such as The Plague of the Zombies and The Reptile both 1966, and ended up directing the Paul Naschy penned La cruz del Diablo (Cross of the Devil) for Naschy in 1975.

Let’s set up The Gorgon – Something is luring in the dark of Castle Borski just outside of Vandorf. Seven unexplained murders in five years have Inspector Kanof [Second Doctor Who, Patrick Troughton] a frustrated man. When young woman, Sacha Cass [Toni Gilpin], goes missing and shortly after, her bohemian boyfriend, Bruno Heitz [Jeremy Longhurst], is found hung from a tree. It all looks like a closed case, and the town Judge rules it all as a murder followed by suicide. Nobody but Bruno’s father Professor Heitz objects and points out that Cass body was actually turned to stone… the town of Vandorf obviously want’s to keep something a secret, and he will not leave until he’s unveiled the mystery and cleared his son’s name. Doctor Namaroff [Peter Cushing] and his assistant Carla Hoffman [Barbara Shelley] run the village mental institute and all seems fine, until Professor Heitz second son, Paul [Richard Pasco] arrives with the same ambition to solve the curse of Vandorf. Carla and Paul take a liking to each other, and plan to take off as soon as Paul has figured out what goes on at Castle Borski, which obviously set’s up an interesting little triangle drama between Paul, Carla and Doctor Namaroff. Towards the final act, Paul’s mentor, Professor Karl Meister [Christopher Lee] also comes to the small village and together with Paul they aim to put an end to the rumors that, Magaera [Prudence Hyman, in one of her few onscreen credited parts in a Hammer flick] – one of two lesser know sisters to the legendary Medusa - resides in the woods of Vandorf. 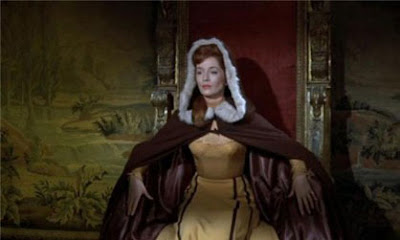 It’s obvious that Gilling has a passion for detective stories – he wrote several crime/detective screenplays, and directed loads of super detective shows, like The Saint, The Champions and Department S. This is seen in the way he constructs the script to The Gorgon, as the movie primarily is a horror movie with an investigation plot. Gradually the audience know what is going on – the gorgon, and the subplots – and with a Hitchcock-ian structure, Gilling and Fisher lead us down a path that is more detective story than horror.
Red herrings are laid out for us to stumble on such as the Martha [Joyce Hemson] character who we blatantly are lead to believe is the Gorgon, and there’s very driven dialogue to make us pose further questions such as when Carla with panic in her voice says to Dr. Namaroff that “She has come back!” Everyone seems to have something to hide, facts they dare not proclaim, truths not yet spoken, which obviously propels the narrative forth.
Obviously the horror comes through the loan of a legendary icon, the Gorgon, Medusa or Mageara as she’s called here, and the heavy gothic vibe that seeps though the movie. Hammer movies are at their best when they ooze of EuroGoth created through the wonderful set design of Bernard Robinson, those great matte painting landscapes, and James Bernard’s magnificent scores – of which The Gorgon holds one of the darkest he composed for Hammer. 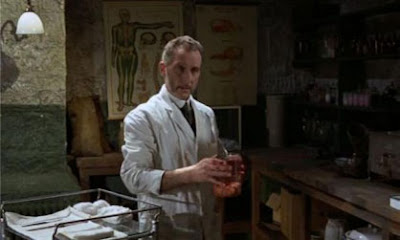 The motif of death is very dominant in The Gorgon and despite using a legendary tale we all know by heart – stare in her eyes, turn to stone – they put a spin on it, where characters don’t turn to stone in the flash of an eye as in the old Harryhausen flicks, but more of a sadistic torment as they slowly turn into stone statues. One character even writes a letter home, telling of the pain and despair he feels in that very moment. That’s kind of heavy, even for a Hammer movie. Also they bring a familiar spin to the story when it becomes apparent that the second night of the full moon is when the attacks occur, something we all know from Werewolf folklore.
Building tension and then gradually releasing it is what Hammer movies are all about. God knows they made their fair share of movies that did nothing but build only to present a semi-shocking reveal at the end. This is also true with The Gordon. The initial attack if you will shows us the exact path that Sasha Cass takes, the religious nook by the roadside, the full moon, and the looming structure of Castle Borski. These elements all become referents later on as Professor Heitz walks the same path, it’s not rocket science and we know he’s walking right into danger. Returning imagery, locations and motifs are all important tools for building anticipation as the next time we see them we are aware of the threat they pose.
Characters are kind of stiff and restrained throughout The Gorgon. There’s no real arcs with evolving characters here, and there’s nor really anyone to feel for to start with. Secrets are kept, science argues against fantasy and every one – especially Dr. Namaroff act as skeptics when it all comes around. So there’s a use of something called the contrast frame at work here, where even the men of science deny to acknowledge the Gorgon – which the audience by the way, knows exists – it becomes logic that we tend to empathize with Paul and Carla. They are after all the only characters to stand up for there beliefs, and even though we as an audience are miles ahead of them both, we tend to favor them.
Although one must not forget the many subplots that are irking their way in, of which the Paul – Carla one is the strongest. There’s also the whole protection racket that comes with Dr. Namaroff. It’s almost eerie the way Cushing sluggishly floats around, stopping here and there for a pose to show us that he’s lost in thought, because despite being the skeptic of the piece, he knows what’s going on… Or at least, has an idea, which is why he becomes a human shield for Carla. He won’t let anyone near her, and does his best to protect her. But he’s so overprotective of Carla that it becomes painfully obvious why she falls for Paul, as he offers her the freedom she looks for. Away from corridors of Dr. Namaroff’s institute, away from Vandorf. Ironically it’s merely a metaphorical freedom and her real freedom comes in a completely different form during the final moments of the movie courtesy of scarcely used Christopher Lee’s Prof. Karl Meister. 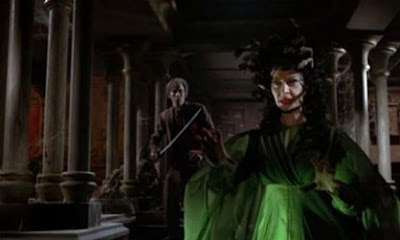 The Gorgon, is still one of those Hammer movies that sums up all that was great about Hammer horror, the atmosphere, the somewhat stiff stage performances of the cast, lurking death, gothic horror and, for the time period, acceptable special effects. Perhaps not as impressive as his work on The Horror of Dracula, you still have to give Sydney Pearson credit for the Medusa and her head of snakes. It get’s the job done, the turning to stone transformations, although primarily only make up, work and the final decapitation scene is still something of a classic Hammer moment. When it all comes around, the movie may be a tad on the slow side, but then again that’s what draws me into the world of Hammer. The slow meditative approach, the modest scares and the clean cut closure, which almost all Hammer movies end with. There’s never any lingering around for no reason at all in the world of Hammer. Kill the monster, cue the end credits, let’s all get up off the couch, and sod off to bed.