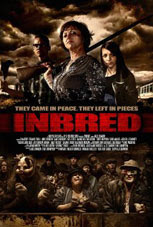 So I’m in Bottrop Germany attending the ninth Weekend of Horrors with fellow cineastes, bloggers and genre movie critics Fred and Joachim. I’d was spending a small fortune on various special editions of Lucio Fulci’s epic Zombi 1979, when we keep seeing people walking around with these really neat retro style exploitation poster t-shirts of a naked woman with a horses head. That’s enough to catch my attention. Then we see flyers pinned up all over the place of a chubby fella with a pig’s head and 3D glasses… Yeah, when we see that there’s a free screening of said movie, it’s wasn’t a hard decision when we decided that dinner could wait, as we had a chance to see a movie not yet released. Especially a movie which few images seen triggered our imagination into places unexpected.

Stepping into a dimly lit room where some geezers where are fiddling about with the projector to get the correct aspect ratio – one who I’d later realize was director Chandon – I started to feel that this may just have been the best damned move this entire weekend, because moments later a bloke had an axe planted in his face and the gore-fest started. 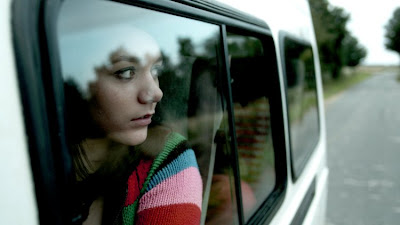 To set this up, here’s a mandatory quick fix for you: It all starts off with a movie within a movie. Let’s call it the initial attack to use terminology that you know I like to toss around. A prologue that ends in a violent showcase of impressive effects and fucking nails the mood of the movie. Cut to modern time, and the introduction of the ordinary world. Kate and Jeff take a minivan from London up North. The obligatory place to take the piss out of, the place where all mongrels live and are kicked in the bollocks in everything from Guy Richie’s Lock, Stock and Two Smoking Barrels, to Danny Boyle’s 28 Days Later, it’s Great Britain’s Deliverance country. Now I'm from the North, and I have no problem taking the piss out of the fact of being a Northerner, and see no reason why anyone else shouldn't. For me it makes Inbred just fell a whole lot more close to home.

Anyway, that’s where they take a bunch of outcasts for a weekend of recreation and self-esteem building. Characters are established some likeable, some not. Small details work their way into the narrative and will return later on in completely different context, such as Tim [James Burrows] the rather empathetic arsonist. Yeah, I know he’s an arsonist from the way he reacts to stuff he sees around the old cottage they are supposed to spend the weekend at. This works for several of the other main characters too, and predictions lead to the unexpected as Inbred manages to avoid a lot of way to common pitfalls along the way. 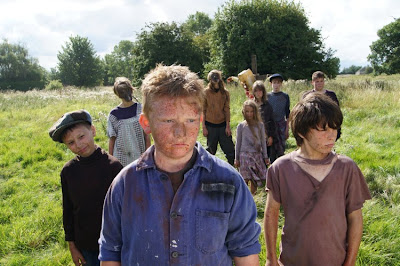 So in their ordinary world, Chandon sets the characters in motion, tweaking and enhancing the minor traits we learned on the drive up, before the obligatory step into the unnatural realm is presented. Quickly fixing up the few rooms that they are going to live in during their stay, the kids are rewarded with a trip down to local boozer “The Dirty Hole”, where they encounter the inbred. From here on we know that the city folks are facing their worst nightmares as cultures clash and the scratching’s fond inbred ignite the hunt that will make up the rest of the movies drive forth.
Now from that you might feel that you know exactly where and what Inbred will be like… but you are wrong. This movie takes a familiar pattern of discourse and flips it head over heels. Conventions lead me astray on several occasions, which gave the viewing experience an interesting touch, as this doesn’t happen to often. The first question in the Q&A after the screening was not surprisingly “Is this movie out yet, because I have to have it!” That’s the kind of movie Inbred is.
Imagine all the dark comedy of The League of Ordinary Gentlemen pumped up on steroids, laced with the nihilistic horror of the new French extremity of recent years – Frontier(s), Haute tension, Belgian Calvaire which undoubtedly is in the same niche and British “fish out of water” – aka city twats taking to the countryside - shockers like Eden Lake and The Cottage. Then spice that with a dash of Jean Rollin, classic Italian gore and a backwoods Emmerdale Farm and you will start to get an idea of how fucking wild and brilliant Inbred really is. 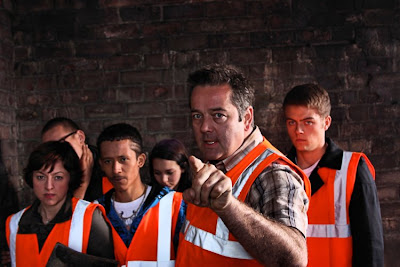 There’s a couple of hilarious referents to stuff like An American Werewolf in London’s The Slaughtered Lamb – you know, the pub they walk into only to find Brian Glover and a young Rik Mayall blurting out that they “don’t like your kind ‘round ‘ere!” – the granddaddy of them all, Texas Chain Saw Massacre, iconic Monty Python images, and fucked up vaudevillian acts from hell.
In many ways the movie blows stuff like The Cottage, Severance and Doghouse right off the map. Inbred plays for keeps, it builds up slow and presents the characters in likeable ways, especially the social workers, Jake [James Doherty], who is such a complete twat, but still tries his hardest to make it work, and Kate [Jo Hartley – a Shane Meadows regular] who manages to work with the kids on their own turf. It’s no surprise that she takes on a heroine character as the survival horror aspect shoots through the ceiling. 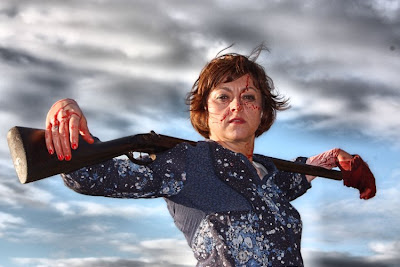 Some fine details that made this an intelligent movie in my book: reoccurring readers will know the most annoying cock up in my eye are those fucking cell phones. Be clever, don’t insult me with the bloody “Oh I have no coverage” bollocks because that’s just lazy. The last movie that did that ended up being tossed out the window and into the park outside my flat, because it was shat out 54minutes into a 90minute film. Chandon handles it brilliantly; as Jeff takes the phones off the kids, sticks them in a plastic bag and shoves them in his backpack. Now that an original way to solve that problem, and just like the character traits, this comes back with a twist later on.
Subplots. Ron [Mark Rathbone], who isn’t allowed into the show, somewhat of a village outsider who even the inbred call a weird sicko. You know that there’s something really freaky in his backstory that makes him really intriguing, and interference with the village performances is hinted at. He’s an interesting character and is used perfectly.
Special effects that had me wondering how the fuck did they pull that off? A lot of movies try to put animals on screen and it most often looks terribly fake. There’s a horse scene, and a lamb scene in Inbred that are stunning, and then there’s some of the best bloody gore scenes I’ve seen since I started watching these kind of movies almost three decades ago. This one goes all he way to eleven on Chas Balun’s old gore score. 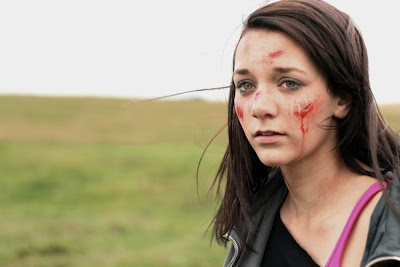 Political incorrectness. To show just how far out there the inbred are, Jim [Seamus O’Neil] puts on a full black and white minstrel makeup, and considering that even the old Robertson’s gollywog is erased from popular culture, it’s a grand way to show that the villagers go about business in any way the like without caring about wrong or right.
Unpredictability is an important part of Inbred, as there’s several times you think you know exactly where it’s going and then Chandon, pulls a 180 on the audience and takes it all in a complete different direction. This was refreshing and definitely created a vibe in the room and definitely created tension in scenes focusing on the empathetic characters of the piece… not saying that we all laughed
Acting is top notch. The villagers do exactly what you expect of them and it rarely feels overacted, when it does it works for the character. Seamus O’Neil another Shane Meadows regular, which you will find several in the movie, as the evil antagonist ringleader is hilarious as patriarch Jim, and Gris [Neil Leiper] is someone to keep your eyes open for more of. Protagonists James Doherty, James Burrows and especially Jo Hartley all give fantastic performances, and watching them fight for their lives was an enjoyable struggle, as it all stays very believable. You know that making it believable is crucial to me when watching genre movies. 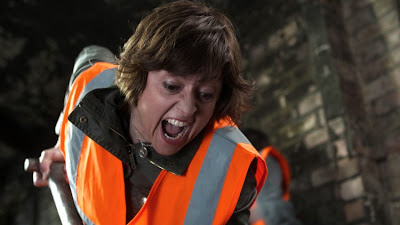 Needless to say the rest of Friday night was spent discussing Chandon’s Inbred, and comically all three of us later spontaneously drifted into separate corners of our hotel room to start writing our reviews of this spectacular movie. It recently played in Sitges, and received a honourable mention at the Fantastic Film Festival in Lund – although if I’d had been in the jury, this one would have been sent to fight for the Méllès d’Or in Sitges, not Joe Cornish’s Attack the Block 2011, which I also thought was a great trip.

So grab a fountain pen and scratch Inbred onto your arm, because this one is going to be a classic, and you definitely don’t want to miss out on this gem.

A very enjoyable read/review J! Sounds like you had a great time.

Cheers J.
Yeah we had a great time, Alex was a champ, and I really love the artwork you made for the movie.

Fucking rad man! We all wear our horseheadedwoman t-shirts with pride!