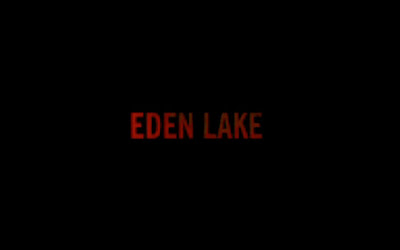 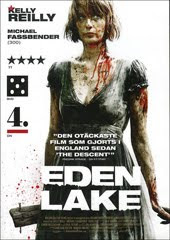 Something is happening to modern horror. Something that works it’s way in under your skin, seeping into your bloodstream, creating chills and strong emotions that rarely are noticeable for the advanced horror-genre cinema enthusiast. I’ve been around the block a few times, I’ve seen most of the stuff that makes and breaks genre several times since the golden age of video, thru the laserdisc decade up to modern day format of DVD and blu-ray. Every now and again there’s one or two movies that stand out and disturbs me on levels that classic formula and generic horror doesn’t anymore. 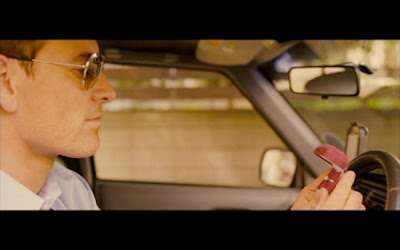 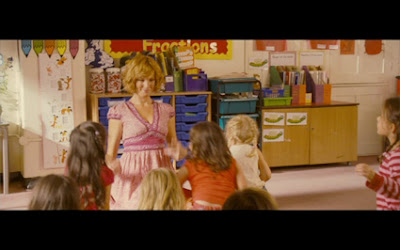 Movies like David Moreau & Xavier Palud’s Ils 2006, Pascal Laugier’s Martyrs 2008 and James Watkins’ Eden Lake 2008, all go for the jugular, they bite hard, and they never let go. They lure the audience in, and as we see possible justification in the final reel these movies tear the carpet of safety and genre traits from under us and leave us smashing into the floor at the movie takes an even dimmer decent into nihilistic darkness.
You don’t walk away from these films feeling that everything is packed and sealed like you normally do from horror films. Instead you walk away with a bloated feeling of malcontent as these films break the mould and dare to push it one step further than genre convention. That’s why we feel so down and beat after watching them. We are accustomed to justice, redemption and protagonists walking away with battle scars to prove that they where worthy of our emotional investments during the duration of the film. 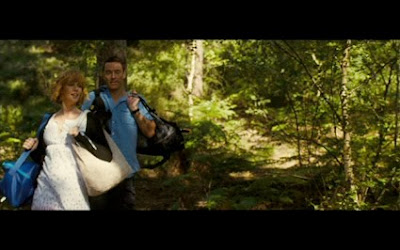 Eden Lake is no exception to all that pseudo analysis above, it is dark, depressing and will leave you wanting to take a shower and watch SpongeBob reruns all day to cleanse the mental images and emotions out of your head. 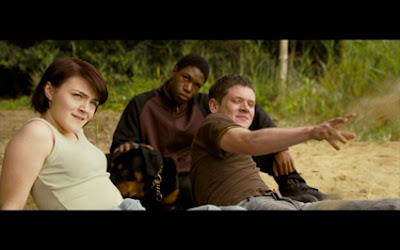 There are several extremely well used tricks along the way that make us sympathize with the two main protagonists Jenny [Kelly Reilly] and Steve [Michael Fassbender]. She’s a preschool teacher, she’s friendly to Adam when the first meet him in the woods, she tries to make Steve ignore the gang when they first encounter them on the beach – she’s an all round likeable character. Steve let’s us in on the secret that he’s going to ask Jenny to marry him, in an early scene in the movie, he’s a somewhat clumsy – but still a gentle minded character. He doesn’t get angry with the barman for not taking his order, he tries reasoning with the kids on the beach, but he doesn’t get violent or offensive with them. He takes a mature approach to life and it’s obstacles and we like him for it. This once again goes to prove how valuable it is it take the time and establish lead characters, if this where a generic slasher, there would have been four, five other archetypes baked into the mix, and we would not have got the time to establish them properly, which makes us just want the carnage to begin. By the time Watkins is finished setting up who Steve and Jenny are we are somewhat reluctant to face the horrors to come. We know that it’s going to be a bleak journey; we know that terrible stuff is going to happen, and now that we have invested in these characters, and become emotionally tainted by them, the foresight of a tormenting future is not as appealing anymore. But there’s a voyeuristic trait to all of us and we will watch. 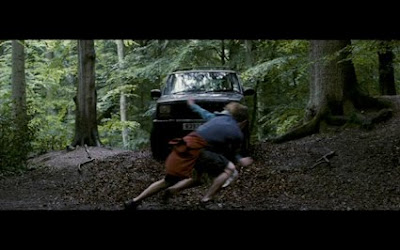 Steve and Jenny are planning to spend a weekend at a remote quarry, before a series of exclusive houses are built in the surrounding nature. On location they encounter some local kids who also use the beach on the quarry as their hangout. The kids are loud, impolite and a general nuisance. Nor do they hold any respect for adults and are very offensive when Steve tries to talk reasonably with them. A series of events see the gang puncturing Steve and Jenny’s jeep tires, and eventually stealing the car, almost running Steve and Jenny over as they joy ride through the woods. Later at night they confront the kids, and an unfortunate accident leads to despair as the gang leader Brett decides that they have to punish Steve and Jenny. This is what sparks the sadistic game of hide and seek that brings some genuine nail biting suspense to the movie, as the band of youngsters chase the couple back and forth throughout the deep, deep woods. There’s moments of distress, fear and agony, but also of hope and optimism, but those are rapidly plummeted back into deeper pain and suffering making for a hellish rollercoaster ride. 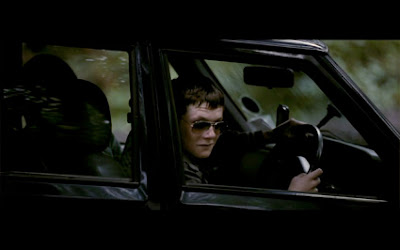 Part of the psychology of these movies is due to the fact that there are children in the roles of lead antagonists. There’s always an uncanny mood when children are employed as the evil forces in movies. Children are not supposed to go about these sort of acts, and even though they sometimes do in real life, we have a difficult time processing these events. This is commented in the movie during one of the release sections when jenny and Steve fix their car tire and eat breakfast in the nearby village. Steve questions the café owner if a band of kids on BMX’s live in the area, and get’s the reply “Yeah my little terrors ain’t they!” with an affectionate motherly smile attached. When Steve prods further and claims that they flattened his tires – the mother says, “Not my kids didn’t, not mine!” It’s hard dealing with the fact that your kids might be evil little bastards out causing trouble, because children are not supposed to do bad things. 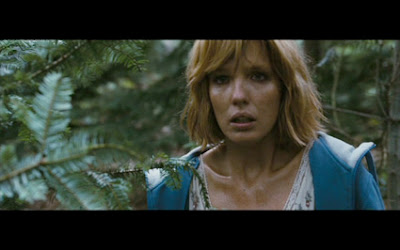 Children are supposed to represent innocence and not hold corrupt values. The two leader figures of the band of children Brett [Jack O’Connell] and Paige [Finn Atkins] obviously hold the others in a grasp of fear, the sort where one of the band always is at the butt of all jokes. And Brett’s power hold is painfully apparent when he forces the rest of the gang to take part in the assault and battery of Steve. One by one they are forced to poke prod and slash him with their knives as Paige films everything with her cell phone camera. Footage used to manipulate the rest of the gang into taking action. With the choice of two evils – Stabbing Steve of going up against Brett, the lad’s choices are simple decisions. Brett is apparently not the kind of guy you want to oppose. 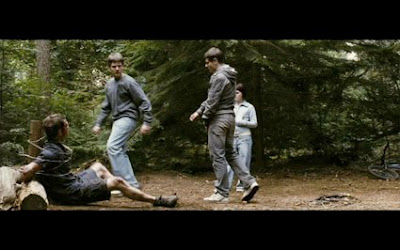 Then there’s that retaliation. Retaliation against children is complex, because at the same time that you want these children to be punished, you can’t really justify killing a child or even beating them. And it’s within this complex logic that Jenny’s downfall is sealed, when she finally strikes back, it’s against the youngest of the group of children, Cooper [Thomas Turgoose] the child who has been the most reluctant to take part in the terrible crimes against Steve and Jenny. As he moves up to Jenny, possibly on his way to guide her out of the woods, Jenny strikes and in doing so she seals her own fate. 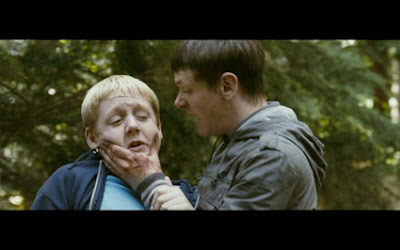 In that ominous final reel, where there’s a slight chance of relief and justification, the death of Cooper comes back to haunt Jenny and we learn the awful truth about the children. They are merely mirror reflections of what they see at home, they are not simply plain evil kids - they have been moulded and shaped by their parents and adult role models around them. As the movie comes to a closure Brett stands erasing all evidence of his erroneous ways, after all just like his father said, they look after their own out here. 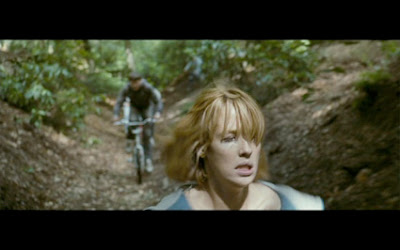 I worked on a project where the producer decided that this movie was all about man against nature, how urban man goes up against the elements. After watching the movie it’s quite apparent that the guy didn’t have a sodding clue what this movie was about, but perhaps that’s the interpretation he chose to take to protect himself from the after thoughts and anguish that the movie brings with it. But it is definitely not about man going up against nature; it’s all about man against himself. 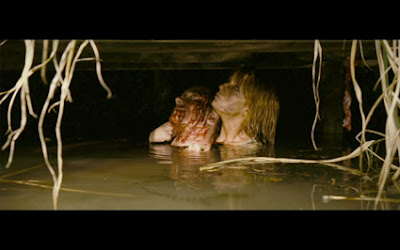 Evil does not simply exist; evil is bred and shaped by the surrounding environment. And it’s not the doing of evil that we should fear; it’s the choices of doing evil that hurt us.
And it these choices of uncompromising violence and sadistic deeds that make these movies so disturbing, as they simply portray evil in it’s purest form. An evil without a conscious or remorse. 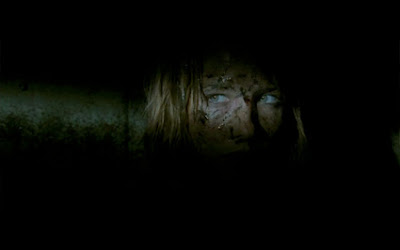