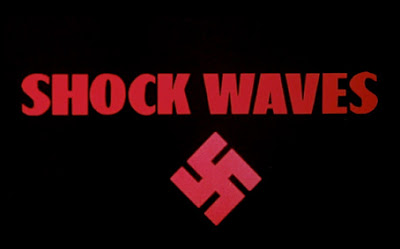 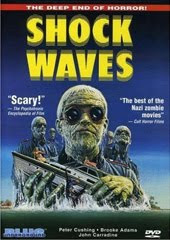 Shock Waves
Directed by: Ken Wiederhorn
USA, 1977
Horror, 85 min
Distributed by: Blue Underground
The Germans - Stern, ruthless and methodical to the bone. To say the least, the Germans at least gave us one useable thing out of the Second World War, apart from the Autobahn infrastructure, The Nazi. The Nazi is the most elaborate of all archetypal characters. You don’t need to set up anything with this character, just angle the camera at them from a lower angle and you have a haunting image of evil looming on the screen. There’s no back story needed, no character traits have to be explained, just shoot the image, and the audience will fill in the few blanks and cringe with recognition as they know the Nazi is the most evil of all… and when you are dealing with a Nazi that’s come back from the dead, they the amplifier just got cranked up to eleven. 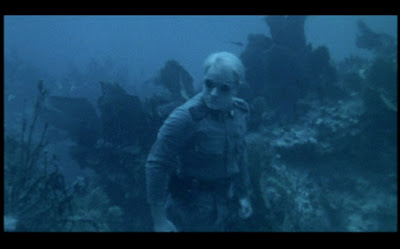 Evil Nazi’s are a splendid tool to use, that’s why they are so frequently utilised by filmmaker, writers and comic book creators. Simply because they are our most powerful emotional, historical and cultural signifier of the foul core of pure evil – unless you are into all that White Power, supreme race bullshit of course. This is obviously why Mike Mignola has the Nazi forces exploring the Occult, and being the main antagonist in his Hellboy comic, and the first movie, this is why Tommy Wirkola uses Nazi Zombies in his smash hit Dead Snow 2009, why Steve Barker has Nazi ghosts in Outpost 2008, why John Landis werewolves in David’s dream sequence in An American Werewolf in London 1981 are dressed in Nazi uniforms, why George Lucas clad the upper ranks of the Empire of Star Wars 1977 in Nazi influenced regalia, why Jesus Franco put them at the bottom of a lake in Oasis of the Dead 1981, and why Jean Rollin used them in Zombie Lake 1981, why so many got so excited about the Richard Raphoorst’s now abandoned Worst Case Scenario and why the Nazisploitation genre always managed to churn out the most vile villains. The Nazis are the definitive evil character.
Which obviously is why Ken Wiederhorn riddled the ocean with Nazi Zombies in his 1977 movie debut feature Shock Waves. 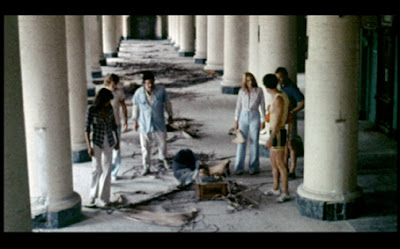 Shock Waves starts with a classic final rescue scene indicating that one person at least will get out alive… as Rose [Brooke Adams - Phillip Kaufman’s excellent Invasion of the Body Snatchers 1978, and David Cronenberg’s The Dead Zone 1983] is found floating adrift on a small raft. She’s pulled onboard a fishing boat as she writhes and screams in panic. Some bad shit has apparently gone down, and we will soon learn what as the movie jumps back in time to Captain [the legendary John Carradine] and his tiny crew of Keith [Luke Hapin] and ship cook Dobbs [Don Stout] travel the Caribbean. Moments later a strange phenomenon knocks their boat out of whack unsettling the passengers, and setting the tone of creepiness to come. 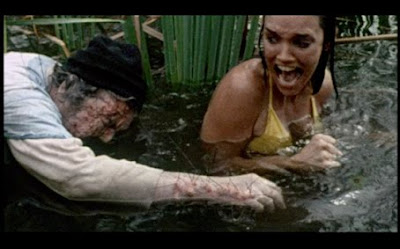 Obviously strange stuff starts taking place, the passengers start to complain and after the boat is damaged by the passing ghost ship, the Captain is found dead in the waters as the rest of them take refuge on a remote island. On the island they find a seemingly abandoned mansion, and stumble upon the only person left on the island, a strange man donning a huge facial scar. [Hammer legend Peter Cushing] It’s also around this time that the zombies start to make an appearance, first taking out Ship Cook Dobbs. Cushing tells them to get the heck off the island, and as Rose goes for a evening swim in a lake, she finds the body of Dobbs floating in the water with a Nazi insignia held firmly in his dead hand. The few survivors lead on by Keith return to the hotel only to notice the swastika flags hanging in the main hall. Cushing appears once again, and like all bad villains he spills the beans without the Keith and company actually forcing him. Cushing turns out to be an SS Commander who was in charge of creating a special immortal task force - the Zombies - who he had command of during the war. As the war ended he was told to flee with his army of the undead, who all roamed the seas until their boat smashed into the reef off the island. With that said he tells the survivors that he at least gave them the chance to escape, something that is impossible now. Loading his pistol of fine German steel – his Luger gun - he tells them to leave, and if he sees them again he will shoot to kill. 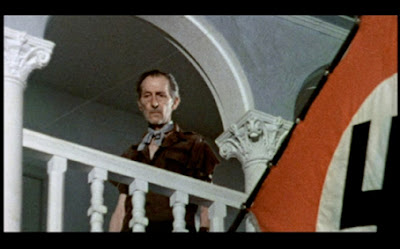 As if Cushing’s threat wasn’t enough, they now have the army of the dead to avoid too. An army that pretty soon goes on a rampage after they decide that they don’t need a commander anymore. The movie more or less becomes a survival horror flick from here on, with the petty band of survivors becoming lesser in total forever ten minutes that goes by. This is where the danger of the opening sequence with survivor Rose being rescued comes back and bites the movie in the ass. There’s always a huge gamble at stake when you open your movie in this manner, as I know whom I can expect to pull though. And if you don’t take the time to build the supporting characters around that single survivor, they I’m not really give a damn about them. I feel nothing for the characters, and only want the carnage to begin. But Wiederhorn has a surprise ending in stock, an ending that is subtle, but still giving the movie a down beat finale and leaving you with a question to what really happened on the island. 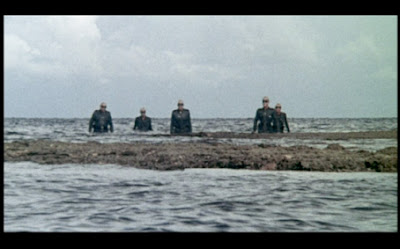 All in all it’s a decent little flick. Perhaps not the most scary movie, but it does build slowly, setting, and sustaining a rather decent atmosphere which on many occasion actually holds a very European feeling to it. Carradine and Cushing only feature in the movie for a short time, but it’s a great move to use such acclaimed names in your debut feature, as you can guarantee that you will have those two recognizable names on your marketing material. 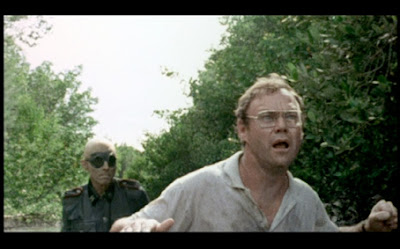 The Nazi Army, and their special effects created by Alan Ormsby of Bob Clarke's cult classics Children Shouldn’t Play With Dead Things 1973 and Dead of Night 1974, along with the delirious Deranged 1974 which Ormsby directed himself together with Jeff Gillen are pretty darned good. Even if they all look like a early nineties EBM band with bleached hair sporting raver goggles on their heads, their wet, bloated soggy appearance is pretty creepy. And speaking about special effects, that’s about as far as it goes. There’s no gratuitous gore or gut munching here at all, not even a single onscreen drop of blood which is a shame, but then again, that’s where the European ball game was at during the time period, and a completely different area all together. Within a couple of years the splatter and gore wave hit the US horror genre hard, and if made just a few years later, Shock Waves could have been a completely different movie. But all in all it plays it straight, avoids cheap gags for comic relief and creates a swell atmosphere for the movie. 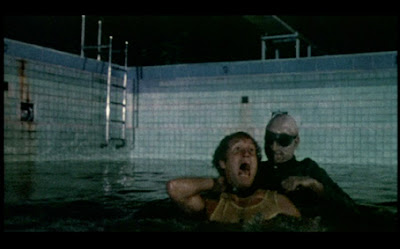 Wiederhorn went on to direct college comedy King Frat 1979, a cash in on John Landis Animal House 1978, the thriller Eyes of a Stranger 1981 and the somewhat failed horror comedy, Return of the Living Dead Part II 1988 before settling into a quite decent career directing TV serials. 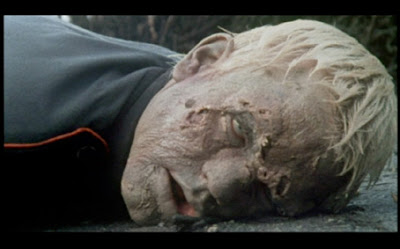 On a final note, the movies that take liberties with the Nazis fascination for the occult are actually based on “real” divisions and fractions within the party. They where heavily into that stuff, and books like Hitler: Black Magician by Gerald Suster and Unholy Alliance: A History of Nazi Involvement with the Occult by Peter Lavonda are fascinating reads which I definitely can recommend. 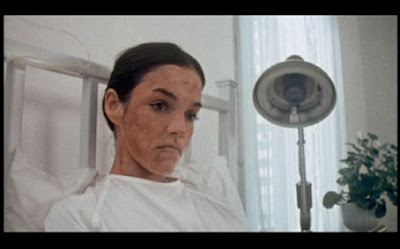 Image:
Widescreen 1:85.1, anamorphic 16x9
Audio:
Dolby Digital 2.0 Mono. English Dialogue, no subtitles
Extras:
From Flipper to Shock Waves – interview with Luke Halpin, Theatrical Trailer, TV Spots, Radio Spots, and Poster Gallery. An commentary track with Wiederhorn, Alan Ormsby and indie filmmaker Fred Olen Ray which is highly entertaining, and not only gives an insight into the movie, but the crew also share some great tales about working with legends like Cushing and Carradine.
- February 08, 2010

Shock waves is a minor classic, awesome atmosphere and cool zombies. The Nazizombiegenre is sorely underpopulated.

@Jocke: Yeah, there should be a dozen made like every year to keep us content. :) Have you seen The Outpost? It's easily as creepy as Shock Waves!