The Raiders of Atlantis 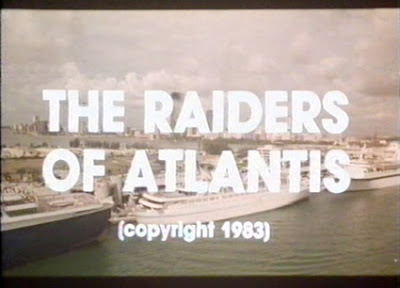 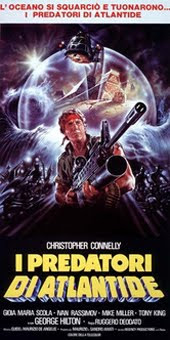 Weren’t the seventies and eighties just bloody great? Weren’t the B-movies of this time period so much better than they are now? These days cheap DV, crap dialogue and shitty acting all feel so damned rough, raw and most often lack the passion for making an imprint. Back in the eighties (and before then too of course) B-movies and even worse were at least shot on film. There was a larger machinery behind the process, which demanded more than just calling up your mates and shooting. B-movies where still all about telling the best story for the least bucks, and they did make some really great movies. But the best part of it all was that these cheap low budget flicks pretty quick ended up on video (some on the big screen if we where lucky) for the thirsty home entertainment crowds outside of the native countries, which constantly fuelled our cravings for cheap kicks; Hong Kong kung-fu movies, European and American horror, Giallo and exploitation movies, Italian Spaghetti Westerns and Bud Spencer - Terence Hill action comedies that we could watch with our mates in front of the gargantuan video tape recorder. And watch them we did, over and over again. 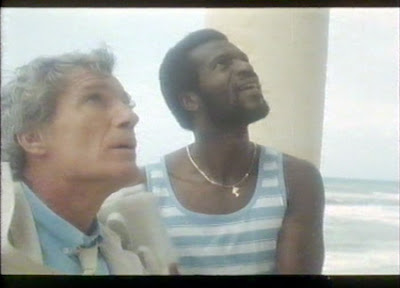 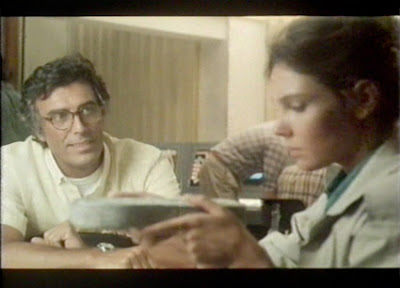 Ruggero Deodato also directed his take on this amusing little subgenre, and even through screenwriters Tito Carpi [one of the writers on Deodato’s Last Cannibal World (together with Deodato regular Gianfranco Clerici), Enzo G. Castellari’s The New Barbarians 1982 and Escape From the Bronx 1983] and Vincenzo Mannino [who wrote Deodato’s The House on the Edge of the Park 1980, Phantom of Death 1988), Castellari’s The Last Shark 1981, Lucio Fulci’s The New York Ripper 1982 and Murder Rock – Dancing Death 1984 together with Gianfranco Clerici too] took the task of setting yet another adventure in the bleak future, they did try something that differs it from the other urban city end of the world movies, they brought in one of mankind’s most cherished and fascinating myths, the legend of Atlantis. 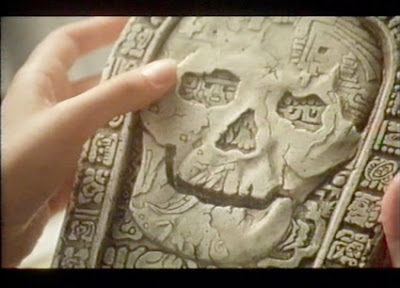 Time for a quick fix if you haven’t seen this delight since the age of video: Shot in 1983, the movies is set in a near future - 1991, Miami, Florida - or rather a distant past watching it these days Mike [Christopher Connelly] is a old school action guy who comes across as a mix between Don Johnson in Miami Vice and Harrison Ford in the Indiana Jones films, as he jump starts the movie with his compadre Washington [Tony King], as they rush through a rapid kidnap scenario. The dudes are paid and take off for a weekend of cruising the seas outside Miami. A helicopter blasts by them and tauntingly circles them before taking off for the horizon. We cut to an oilrig like location where Professor Peter Saunders [George Hilton] greets Doctor Cathy Rollins [Gloia Scola], and pretty quickly delivers the exposition needed. ON the bottom of the sea, a Russian atomic submarine lies abandoned, and the plan is to raise the sub, but during the preparation, they have found some strange ancient tablets that can only be encrypted by Dr. Rollins. Well a movie without conflicts is a boring movie, so as soon as they start their successful levitation of the Sub, the shit hit’s the fan and an electrical storm blacks out the entire coast. Up from the bottom of the ocean a glass encased island forces it’s way to the skies, creating such tidal waves that the oilrig topples over and crashes into the ocean. Luckily Mike and Washington are in the area and manage to save but a few survivors – James [Michele Soavi], Professor Saunders, Bill Cook [Ivan Rassimov] Frank [Giancarlo Pratoi] and Dr. Rollins and together they set of for shore, not the island which would have been the obvious choice, but for the safety of land. 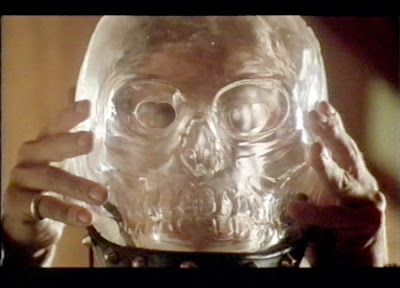 At the same time that this strange aquatic phenomenon has been taking place out at sea, mysterious gangs have been roaming the streets, creating chaos and raising havoc amongst the population. Murder is their game, and the Atlantis Interceptors are their name. These gang members, led by Crystal Skull [Bruce Baron] and ancestors of Atlantis, are killing off the people of our world in their quest for the knowledge that will make the Atlantians the truthful rulers of the world once again… and after a few violent battles, the finally find the one they are looking for. Yeah, you may have guessed it, Dr. Rollins is the woman with the knowledge, and the Atlantians snatch her right from under Mike’s nose. Needless to say this is at approximately midpoint, dramatically speaking, movie wise we’re two thirds through. Mike persuades the rest of the gang that they have to go to Atlantis – the island that rose earlier – and take back Cathy. Hence starts the jungle adventure part of the movie, and also gives Deodato yet another opportunity to shoot in the Philippine jungle, which see’s most of the cast meeting their deaths in various battles against the Atlantis Interceptors. As all good things come to an end, so does even The Raiders of Atlantis, and after the the final bout between Crystal Skull and Mike, which you probably already can guess the outcome of, there's a spectacular and enigmatic meeting with Cathy, now hailed and worshiped as a god by the Atlantians as she’s cracked the code to their power. In the somewhat confusing climax, the survivors’ race towards freedom as Atlantis once again closes its glass casing and returns to the bottom of the ocean. Phew - what a rush. They don't make 'em like this anymore. 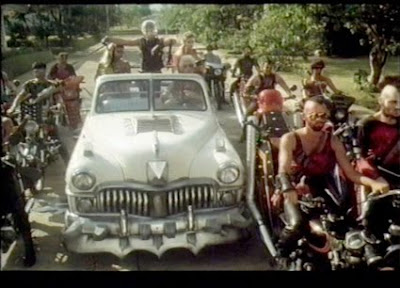 There are a few wonderful tricks in this movie, tricks that make it an enjoyable flick. The first being the way the sell Christopher Connelly’s character Mike. Just like those hard formulated James Bond movies, and the Indiana Jones flicks, The Raiders of Atlantis starts up with the culmination of the previous mission which shows Mike and his sidekick Washington breaking into a house, kidnapping some dude, punching and shooting their way back out. They deliver the kidnapped victim to the mobster who gave them the task, get paid and take off for new adventures. Just before they get to the rendezvous place, the mobsters’ henchmen deliver the following dialogue: “They made it!” – “They always do!” 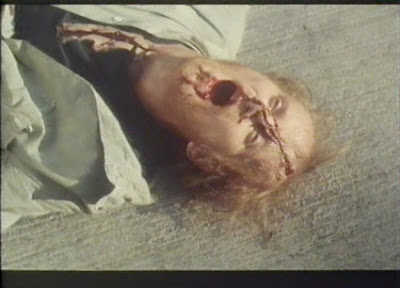 This little action opening shows us that Mike and Wash’ are men of action, they don’t talk bollocks they get the job done. No task is too hard for the duo, and we also understand that they have been around the block a few times before. This is further indicated as they get closer to the rig later, and meet up with their fellow adventurers. They already know who Cross [Rassimov] is, and as they alter share a beer, and fly the helicopter they reference previous adventures. The reoccurring gag where Mike calls Washington “Wash”, instead of his new name as a reborn Muslim, Mohammed, also adds to the layers as their friendship obviously goes so far back that Washington has always, and will always be Wash.
And that’s pretty much what you take with you into the movie, as it sets up Mike and Walsh as the shit kicking action heroes that they are, and they do kick some shit in this wonderful, sometimes cheesy, but excellent action flick which manages to do the job and keep me entertained for the ninety-two minute duration of the film. 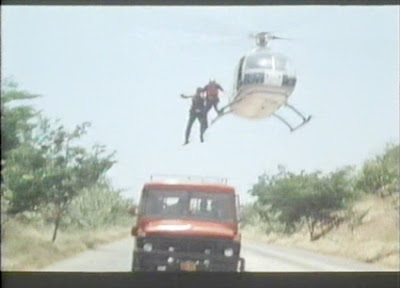 The stunt team – Rock Stuntman Team – frequently used in Italian movies, pull off some great bits here. Apart from the usual falling off bikes and high cliffs in the jungle of Atlantis (much like they fell off horses and rooftops in the Spaghetti Westerns), they also perform some amazing aerial stunts as they throw themselves out of a moving helicopter onto a moving buss containing our group of protagonists. Impressive stuff to say the least, and definitely one of the highpoints of the movie. 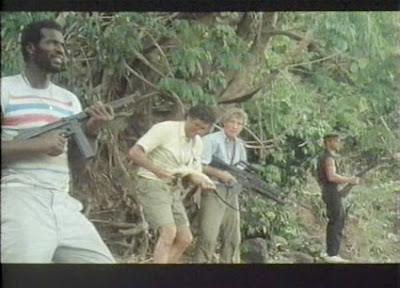 Needless to say the re-naming of the movie: The Raiders of Atlantis, is once again a cunning trick of the marketing department and the producers, and is only there in an attempt to cash in on the success of Spielberg’s Raiders of the Lost Ark 1981, and the original title – I predatori di Atlantide translates as The Predators of Atlantis, is a more understandable title, as no one really raids Atlantis, but rather the Atlantians are the predators. And in some bizarre way the screenwriters have even managed to pack in a warning to mankind in the movie. After Atlantis has risen again, the Atlantians start killing mankind as they feel we have misused it. Gang leader Crystal Skull makes it quite clear when he declares his mission with the line of dialogue - ”You have violated our world, and therefore you must be punished. All of you will be executed!” 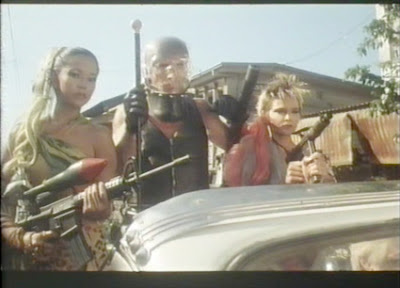 Directing under his pseudonym Roger Franklin, Deodato’s splendid The Raiders of Atlantis was edited by Vincent Thomas, or rather Vincenzo Tomassi – Fulci’s main man in the edit suite, there’s some pretty grand special effects by Gino De Rossi (decapitations, classic Deodato booby trap in the jungle, deadly darts and an arrow through the head), the mighty Nick Alexander supervised he English dialogue version (and provided the Dub for Rassimov’s Bill Cook) and there’s a real chunky score by Maurizio and Guido De Angelis under the cryptic name Oliver Onions. Great combinations that make it a highly enjoyable movie, and keep an eye out for Deodato in a cameo appearance on the oil rig during the first half. 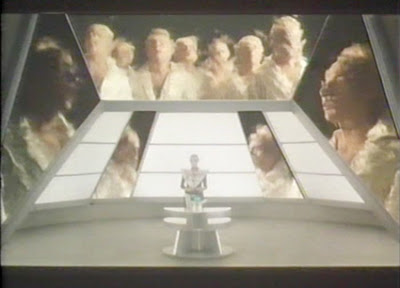 Image:
Fullfram 4:3
Audio:
Stereo. English Dialogue, Swedish Subtitles
Extras:
Well it’s taken from an old Swedish rental tape, but theirs is actually a trailer for Fabrizio De Angelis’ Thunder 1983 after the movie.
Here's the great trailer, and if you pay attention, you'll even catch Deodato in there.
- February 28, 2010

I didn't enjoy "Raiders" much, but then I'm more of a 60's/70's man and this film is soo 80's. Plus my DVD-r copy kept jamming towards the end which prevented me from fully understanding what the hell went on there.
Not sure I want to revisit this until a decent edition surfaces.

Yeah the 80's stuff does lack some of the impact that the 60's/70's stuff has. Even the Gialli where getting pretty lame and silly at that point, rehashing old tricks and inserting way to many snatchshots that necesary. But there's still some great nostalgic value to the old action flicks of this period. It's easy on the old brain when you just want to wind down infront of something mindless that doesn't demand too much from you.

A decent edition of this movie is definately in demand, but just like the producers at the time, there's probabaly not as much incomegivving profit for any company to re-release this kind of stuff, as it doesn't really have any edge at all. Well not like the Cannibal, Polischiotti's and horror stuff atleast. But with that said, I'd definately pick this one up and even better if was a double feature with The Concorde Affair. A double dose of Spaghetti Action that can go far. :)

Yeah, "The Concorde Affair" has been avoiding me for a few years now, I will have to check it out one day!

You can get this on dvd. It's released in the 5 disc/20 features GRINDHOUSE EXPERIENCE BOX SET PART 2 under it's alternative title The Atlantis Interceptors.