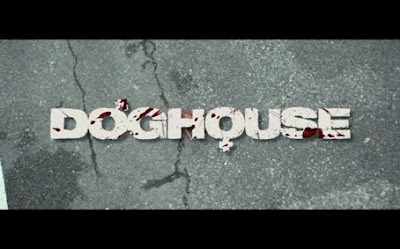 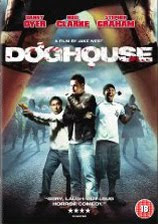 I have a bit of a problem with movies that try to be both funny and scary at the same time. Perhaps it’s because the horror comedy is one of the hardest subgenres to master as you either end up with schlock comedy like the Scary Movie flicks, or a confusing genre bender like Christopher Smith's Severance 2006 - a comedy for far to long and then trying it's hardest to be horror film that isn't quite certain of which foot to stand on, with Danny Dyer in the leading role. 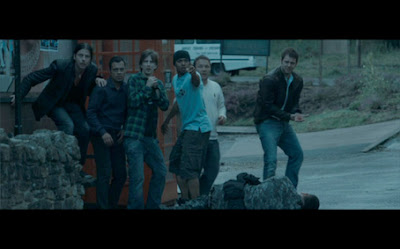 Few movies have managed - Ruben Fleischer’s Zombieland 2009, Don Coscarelli’s Bubba Ho-Tep 2002, Paul Andrew William’s The Cottage 2008, Peter Jackson's Bad Taste 1987, Braindead 1992, Edgar Wright’s Shaun of the Dead 2004, Tommy Wirkola's Död Snö (Dead Snow) 2009, Sam Raimi’s Evil Dead 1981 and Evil Dead 2 1987 - to name some of the successful attempts. But these movies don't mock the horror like in the Scary Movie flicks, but use the horror as part of their narrative and milk those traits for all they are worth.
Jake West’s Doghouse at least gives the tricky subgenre a decent run for it’s money, and does manage to entertain me, treat me to a few laughs, but isn’t scary in any way. Unless you suffer from gynophobia of course, then you will be freaked. 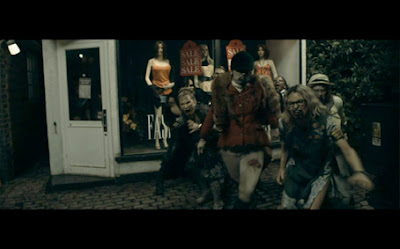 Obviously that’s not the main point of the flick either, it's all about the laughs, but I have serious issues with this niche and can’t quite figure out why you would want mix horror traits in with your comedy if you didn’t want to scare your audience. In generic horror it’s part of the formula, a laugh to bring down the defences and then shock the heck out of the audience. It’s the same pattern with the sex in generic horror, flash a pair of breasts, awakening the lust synapses which makes the audience lower their guard and BLAM! scare the crap out of them.
But why would one want to go for a few quick shocks in a comedy… If it’s done with love and respect for the genre and actually part of the narrative – like in Shaun of the Dead – it’s a treat, but done in the wrong way, like the confusing and overrated The Signal 2007 which does have some great parts - but you can't make three chapters in three different genres within the same film without major complications, it just bores the crap out me and I end up angered and frustrated that I wasted valuable movie time.
Doghouse didn’t bore me. I liked it, and perhaps not to strange either as it plays heavily on gender prejudice and young male chauvinism, a sensitive area that is a great area for exploiting. Comedy and Horror should push the boundaries of reason and moral values or they are not doing there job right. 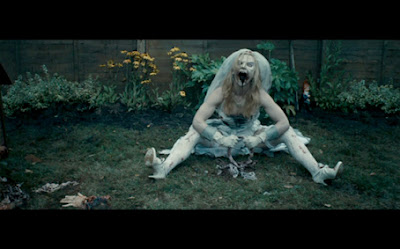 A band of mates all get together to take former member Vince [the amazing Stephen Graham Guy Ritchie’s Snatch 2000, Scorsese’s Gangs of New York 2002, Shane Meadow’s fantastic This Is England 2006, and soon to be seen in Dominic Sena’s Season of the Witch with Nicolas Cage], out in the countryside for a weekend of boozing, partying and raising hell, all to help him get over his sore divorce. Ring leader Neil [Danny Dyer – I cant get my head around Danny Dyer either, as I get the feeling that Danny Dyer never actually plays a character, instead all his characters are Danny Dyer. Sure he’s fantastic in Nick Love’s The Football Factory 2004, but since then I feel that every character has been Tommy Johnson, or is it Danny Dyer? Remember I mentioned Smith's Severance earlier... well Dyer is Dyer.] Anyhow, ring leader Neil calls the shots, and promises the lads that they will soon see Vince back to the grand old man he once was, not the pussy whipped softy that he now appears to be. Through a series of presentations we see how all the lads in the crew all have their own troublesome relationships at home, which kind of sums up to their non politically correct attitude towards members of the other sex. Which also is what sets the basis for the jokes, gags and monsters to come. They take off for Moodley, where newcomer to the gang Mikey [Noel Clarke – who you may have seen as Mickey, Rose Taylor’s boyfriend in the two first seasons of the reduxed Dr. Who series, and actor/writer of the acclaimed Kidulthood 2006, and later actor/writer and director on the sequel movie Adulthood 2008] grew up, and discover that the tiny, and I mean tiny, village appears abandoned as they scamper right down to the local pub for the first round of pints. Inside the pub there’s a great gag about the non-smoking indoor’s law’s and the smell of the real pub as the audience see the gnarled remains of the barman behind the counter.
Then all hell breaks loose as they find themselves standing face to face with the rabid zombie women of Moodley, monster that the guys soon name zombirds. A not very kosher joke, as many consider bird to be somewhat degrading to women, and not the delightful slang term that it actually is. And the jokes are all on that level, even going as far as the Lads’ F.C. football emblems on their jumpers. 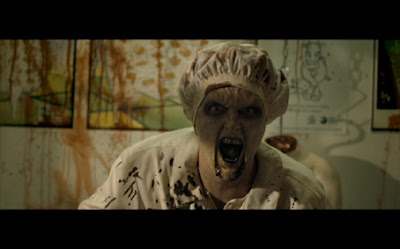 But this is a comedy and you don’t want to get too worked up about it, I just wouldn’t advise that you recommend the movie to your most militant feminist friends. Although I’d have called the monsters Zombitches instead, it packs more of a sting. From this point on the horror traits kick in and it becomes more or less a dark comedic survival horror flick. The guys go up against an impressive motley crew of varied stylized zombirds, ranging from the bride, the wiccan witch, the cute girl next door cashier, to the hairdresser, the lollypop lady and the frustrated overweight housewife. Needless to say the shit hits the fan and the guys rough there way through to the bitter end. 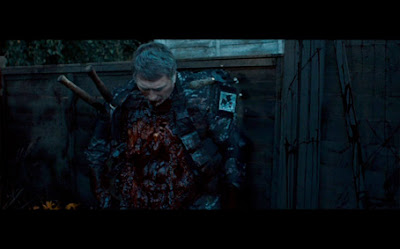 Well really the horror of Doghouse is more of a platform for the movie to work out of and not the main device that drives the movie forth, the guys character development, even though it’s at it’s minimum, and the comedy is the strength of the film. And talking of that character development, the guys who are more politically correct are the first ones to go, and it is a splendid moment when the person with the largest arc actually turns right back to what he once used to be, goes back to being one of the lad’s fed up with taking crap from women, and I the audience cheer him on as he claims his ground and goes out to put the women back in place. Girls get back in the kitchen, because here come the fellas!
The paradox of it all is that even though the movie plays off the lead characters warped view on women and chauvinistic attitudes – sexist jokes in other words, it turns me, the audience, into the exact same thing as the characters, a chauvinistic pig who laughs, cheer’s and ooohhh’s as the guys bash their way through hordes, well half a dozen at least, of zombirds. It’s not a too pleasant revelation when you come to the conclusion, but what the heck, the film had me laughing on more than one occasion and within the context of being a comedy that’s a damned fine result. 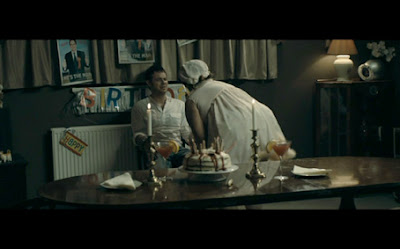 West is no newcomer to the hybrid genre as his previous movie Evil Aliens 2005 proved, he knows how to tell a comedy using horror traits, and sci-fi in that specific case. And his debut feature, Razor Blade Smile 1998, starring Redemption Films icon Eileen Daly and David Warbeck [John Hough's Twins of Evil 1971, Sergio Leone's A Fistful of Dynamite 1971, Lucio Fulci's The Black Cat 1981 and The Beyond 1981 to name a few gem's, Razor Blade Smile being his final picture] is pure modern Goth horror. Screenwriter Dan Schaffer, who makes his debut as a writer for film here, has a background in the comic – graphic novel world and herein lays the little detail that will twist your view on the movie. Schaffer’s creation, DogWitch has always been neo feminist and sees it’s female lead character, Violet Grimm take on friends and foes in a way that only she can. – The comic book is by the way added as a pop culture reference in Matt’s [Lee Ingleby] shop where amongst others the Palace Pictures quad poster art for Evil Dead can be seen.
Now with that in mind I’d say that it’s fair to think of the film as an ironic comedy with horror traits, and not a piece of misogynist trash. The guys are all stereotypes and their characters both commemorate and send up young male culture, and they come up against typical male fears and prejudices’ – they wanted the worst, they got the worst. So in other words you could look at the movie as a feminist film - after all, the women have the upper hand throughout the film, and when male incompetence fails you know that the guys are fucked. The final scene, reminiscent of that Butch Cassidy and the Sundance Kid pastiche that they paid homage to earlier in the film comes to mind again and we realise that these blokes are going to die for the single reason that they stay the simple minded characters that they where at the start of the film. 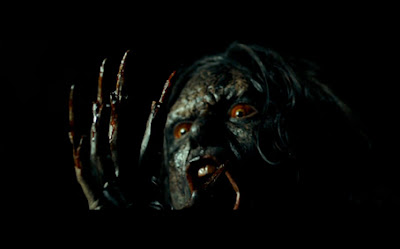 Cinematography by Ali Asad – with several awesome music videos to his CV, the classic Nick Cave/Kylie Minogue duet Where the Wild Roses Grow to name one - is grand. The movie has a wonderful stylized look, but I felt that the sound designer and editor (West among them) probably should have gone over a few scenes one more time, as I missed some valuable audio keys and dynamic when the attacks start taking place - where's the beat in that initial knife attack?
Like said, Doghouse is an entertaining ninety minutes and well worth the watch, great effects, great fun and a smashing rock soundtrack, it’s the kind of movie that you can gather your mates round to watch – or your extreme feminist friend if you keep the pseudo analysis above handy – and have a excellent time watching. 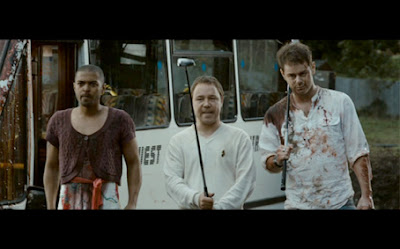 Image:
2.35:1 Anamorphic Widescreen
Audio:
Dolby Digital 5.1 or Dolby Digital 2.0 English Dialogue, subtitles for the hard of hearing optional
Extras:
Anyone wanting to learn more on how this movie came about and was made is in for a treat as the Making of feature is very entertaining and holds several anecdotes from the production. There’s also a few deleted scenes, a blooper reel (does anyone ever enjoy them?), trailers, TV spots a still gallery of those fabulous Zombirds, and production stills.
Now watch this and tell me that you don't want to see this flick!
- January 21, 2010