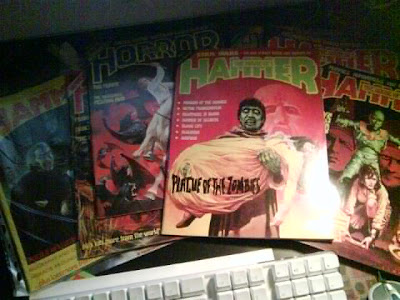 I’ve been a fan of comics ever since I was a wee lad up north in the old UK. A friendly neighbour when I was four started buying me Mickey Mouse comics. I read them over and over again as I learned how to read. Later these Mickey Mouse comics where exchanged for Beano and Dandy, two goofy comics that saw an ensemble of characters face various mishaps and adventures each week. As I grew the magazines shifted into the war comics; Warlord, Battle Picture Weekly etc, the action sport comics and finally to Eagle, Warrior, 2000AD, and the controversial Action - stuff that freaked my mates in Sweden out completely. 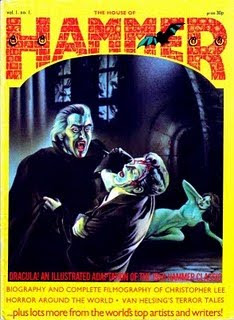 These comics saw darker characters and themes explored; Dan Dare going up against his eternal antagonist The Mekon, Pat Mills sinister stories of Hook Jaw, the great white terrorising the waters chomping down on each foe, but still remaining the hero of the series, or Mills, writer John Wagner & artist Carlos Ezquerra’s brainchild Judge Dredd facing of riots and enforcing the Law in a way that only he could, or perhaps their Stontium Dog (recently re-released in compendiums too just like the original Dredd comics) with his nihilistic view on life as a rejected outsider. It was tantalizing stuff and nobody ever questioned that a young boy should be reading stories of war, death and apocalyptic worlds.

It was a different world back then – “Here’s a few comics, now go to your room and stay out of the bloody way!” - There was none of the pampering that kids get these days. 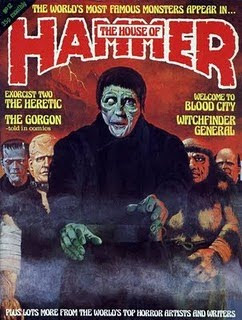 One summer in my pre teen days, I was with my grandmother to the market of the north-eastern English sea side town we once all lived in and found a stall that was complete frustrated kid heaven, a second hand comic stall. The stall had loads of magazines, books and comics on display, but the ones that caught my eye where the HOUSE OF HAMMER comics, edited by Dez Skinn (House of Hammer, UK Marvel, Doctor Who Weekly, and later Warrior magazine which showcased Alan Moore’s V For Vendetta among others). Each magazine packed with horror movie news, articles like Forrest J. Ackerman’s Famous Monsters of Filmland, and each featuring a fully illustrated cartoon version of Classic Hammer movies. I was euphoric, and spent almost my entire saving on buying horror comics, which kind of freaked my strict Catholic grandmother. 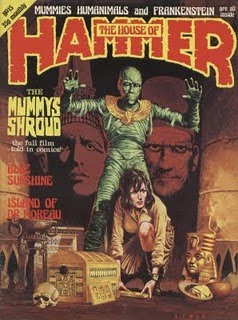 Needless to say I returned to that small shrine like stall every time I was back visiting my Grandparents, even if it meant going to church with my Nan first before we popped off down the market where she was going to buy spuds for the evenings fish and chips. The saving of the pocket money, the longing to rummage around in that stall, lifting away piles of old, odd magazines and comics to find the specific issues that I had read about on the back of the previous bought magazines, the thrill of lying in bed or sitting in the front room by the gas fire reading those movies over and over again. It’s something that’s lost on children of this modern age, where everything is accessible by the touch of a button online. 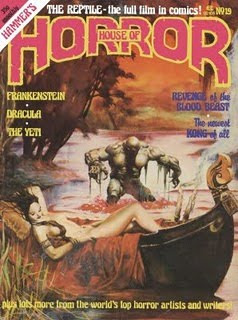 This was before the age of home entertainment, before the great format war between Betamax, VHS and Video2000. VCR’s where not yet a household commodity, rental outlets had still to pop up like mushrooms from the ground, the video-nasties a thing of the future, and Swedish TV sure as shit didn't air Hammer flicks late at night. (Although tv3 did in their early days, giving me a great reason to fall asleep on my couch during my student years.) Oogling those magazines started a life long relationship with horror and the supernatural as I could read and see the movies in this cartoon form. Movies I was too young to watch or see on the late night broadcasts on the telly - well I did see them, but shouldn't really at that young age. But it was through these magazines that I read my first articles on the legends, Peter Cushing, Christopher Lee and the Hammer History. Also it introduced me to the likes of George A. Romero and his films, it was here I read the names David Cronenberg, Mario Bava, Dario Argento and many others for the first time. (Film Journalist Alan Jones wrote early pieces in House of Hammer, which is why I’ve always been an admirer of his work) I would never look at comics in the same way, it lured me into the world of horror as entertainment, and I had a completely new sphere of comic writers and artists that I started to collect and treasure, and today my collection of horror related comics is almost as large as my DVD collection… my precious collections that I hope my kids will enjoy one day... 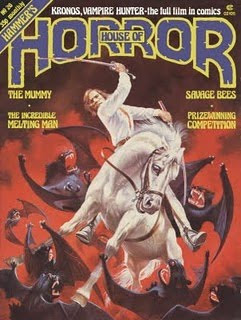 I still have some of my original House of Hammer magazines, and I frequently cruise e-bay for issues I miss. They are still as delightful today as they where all those years ago, perhaps even better as the flaws of low budget cinema are lost in illustrations too obvious on DVD. I wish that someone could re-release the movie adaptations in some new compendium form, as they are definitely something that I can recommend any fan of the genre to invest in.