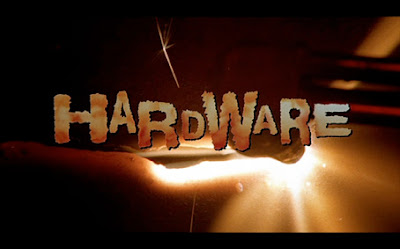 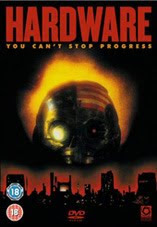 Finally Richard Stanley’s dystopian tale of manic death machine vs. hot chick, gets out of legal limbo and hits DVD in a highly anticipated release. And thank god for that, because Hardware is a brilliant piece of independent, low budget futurism that deserves a grand treatment so that new audiences can discover this true pearl of early nineties genre cinema. 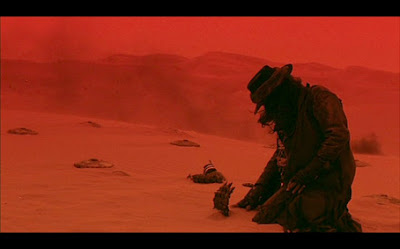 I love this movie; it’s one of those that I keep going back to every now and again. When I was a twenty something at university, Hardware was one of the those movies I’d end up watching (on the old Palace Video VHS tape) every time I’d been out with my mates. It was the perfect film to sprawl out on the sofa with on final drink and fade away to. A lot of it was due to the fantastic soundtrack with at the time contemporary artists like John Lydon’s PiL, Motörhead, Iggy Pop, Ministry, and that brilliant Simon Boswell score. Added to that the cameo’s by Fields of the Nephilim’s Carl McCoy (as the nomad in the start) Mr. Rock himself - Lemmy (as a boat taxi driver) and the one and only Iggy Pop (on the radio as Angry Bob, the man with the Industrial Dick.) 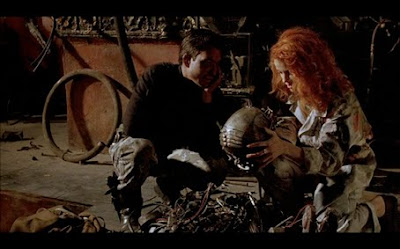 Hardware is a dark movie; the entire tone is apocalyptical, brooding and bleak. The radioactive wasteland of nuclear war looks haunting. There’s an aura of dysfunction that saturates the movie. The tension between the lead characters Jill and Moses shows that they have a really bad relationship, the neighbour Vernon [Paul McKenzie] who get’s his kicks spying on Jill, and making perverse obscene phone calls to her – on the futuristic view phone that shows who’s calling… …yeah that thing we call Skype today, is among one of the most creepiest voyeurs’ ever. The aggression everyone holds towards each other is disturbing, stuff doesn’t work and is constantly breaking down - it’s not an optimistic look at the future at all.
Just like in Stanley’s follow up movie, Dust Devil 1992, there are an amount of visual references to his favourite European directors and films along with biblical references throughout the movie, which make it a wonderful piece of nineties independent cinema. 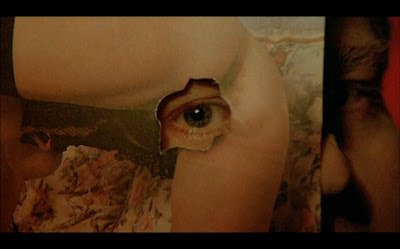 In a nutshell, Hardware tells the tale of Jill [Stacey Travis] a creative artist whose boyfriend Moe (short for Moses, again the religious symbolism) [played by Dylan McDermott] brings home a piece of outer zone trash that turns out to be a deadly droid of the model M.A.R.K.13. The death droid has the ability to rebuild itself and that’s precisely what it does after it drains the power in Jill’s apartment, reboots and goes apeshit in it’s attempt to kill the inhabitants.
There’s a few surprise twists in the movie as the roles are flipped on their end. What we are dealing with here is a strong female protagonist who takes no shit, and stand strong as the male counterparts around her all show their weaknesses one by one, leaving Jill to take on M.A.R.K. 13 in a final showdown. I’d say that the movie is almost like a perfect cocktail of Shinya Tsukamoto’s Tetsuo 1989, Ridley Scott’s Alien 1979, and James Cameron’s original Terminator 1984, but without showing the influences too clearly. Then there’s that 2000AD strip SHOK! by Kevin O’Neil (Alan Moore’s League of Extraordinary Gentlemen) and Steve MacManus that supplied the original idea. It’s a swell mixture that makes up a fantastic film. 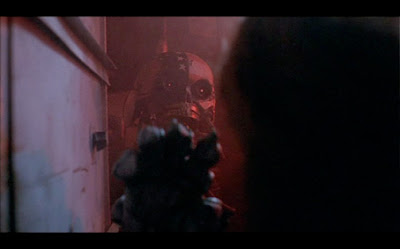 There’s a lot of late eighties, early nineties video imagery playing on the many screens and frequently used to create moods throughout the narrative. Among these are some scenes from Sogo Ishii’s Halber Mensch 1986. Just thought I’d put that in there as Genesis P-Orridge get’s credit for the TV footage on the audio commentary and nothing is said about those great Ishii images. 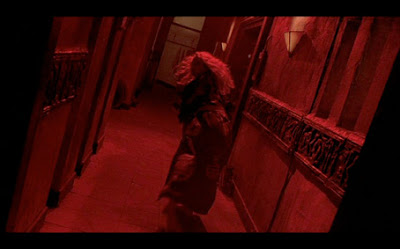 To add to the cynicism of the future, Stanley has the government passing an Emergency Population Control Bill, that’s mainly forced sterilization for all. That’s one good way of keeping gang’s of brats off the streets. There’s a great little detail of Government Sanctioned Dope too, as that’s the fag's that they are all smoking during the coarse of the film. Keep them sterile and mellow, it’s not the most uplifting image of the future. And to top it all off, just at the end of the movie you can hear on the radio from Angry Bob that the government have just decided to reinvest and resume the M.A.R.K. 13 production. So exiting the movie with Jill’s ordeal in mind, the forced sterilization and the sanctioned drugs, it’s a world that one wouldn’t want to be part of; a world facing impending doom. 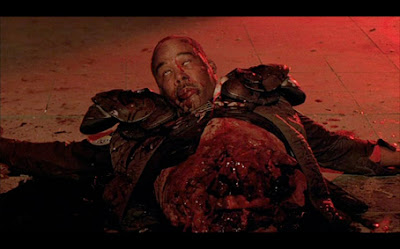 Shot on a minimal budget, the movie is a statement to Richard Stanley’s brilliance, and it’s a shame that he’s not given the chance to write and direct big budget flicks anymore. I can’t say that I feel The Island of Dr. Moreau 1996 became a better film after he was booted off it and replaced by John Frankenheimer. I’m sure that Stanley’s movie would still be talked about and not ridiculed like the film eventually was. And even though one of the many rumours claims that Stanley wasn’t a strong enough director to cope with the very demanding cast (Val Kilmer and Marlon Brando) he’s a fascinating director with some great visions. I guess that story and vision means nothing to Val Kilmer. Also, don’t forget that gong with a big budget studio production usually means sacrificing a fair amount of that creativity that got you there in the first place. What you may not know is that Stanley after being banned and kicked out from production after his mere four days on set, eventually worked his way back onto the set disguised as one of the background creatures. It may just be a rumour too, but it’s a fascinating one isn’t it! 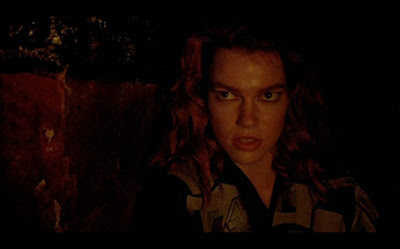 Although Stanley is almost thought of as a persona non grata in the film world for some odd reason, he has been quite active and directed a fair amount of very interesting documentaries, and has two new movie projects in the pipe if one is to believe the various sources online. (What is it with Hollywood and visual directors? Do we really need everything to look like Michael Bay movies?) In 2006, Stanley was part of the screenplay team along with Nacho Credo and Canadian enfant terrible, Karim Hussain on Cerdà’s impressive The Abandoned. 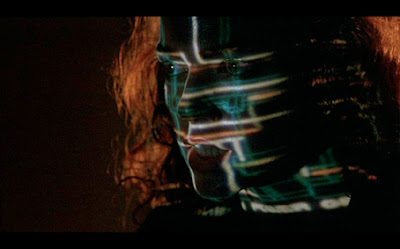 Even though there’s no real way to tell which parts of what, or how they wrote the movie together, it’s still proof that Stanley is a great visionary director, a fantastic writer as Hardware and Dust Devil stand as testaments to his immense talent, for they are both great movies. 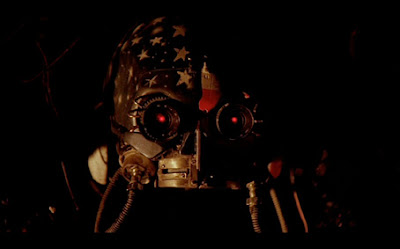 Image:
Aspect ratio: 1.85:1
Audio:
Dolby Digital Stereo 2.0, English Dialogue, with optional English Subtitles.
Extras:
Being a longed after release, it’s good to see that the companies have supplied the disc with a nice amount of extras. First out the insightful and entertaining Commentary track with Stanley and Producer Paul Trijbits (who also was an executive producer on The Quay Brothers The PianoTuner of EarthQuakes 2005) Stanley’s documentary The Voice of the Moon 1990 which he directed and shot in Afghanistan while prepping Hardware. Two of Stanley’s short Super8 movies, the Eight minute feature Sea Of Perdition 2006 and the Original promo for the film. Also there’s a bunch of extended, deleted and behind the scene clips.
- January 09, 2010