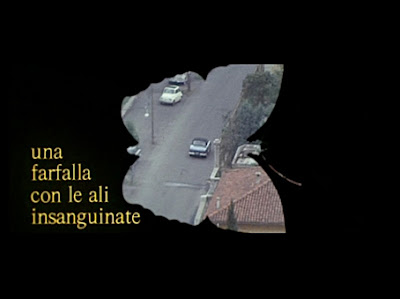 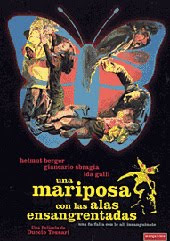 Even though Duccio Tessari’s The Bloodstained Butterfly is safest placed in the Giallo genre, I feel that is has more in common with say Massimo Dallamano’s What Have They Done to Your Daughters? 1974, than the common Giallo. Sure it plays off the same who-done-it plot structure, but follows the cops methods of singling out the villain more than the regular following of one specific lead character – until we get half way through that is. Just like What Have they Done to Your Daughters? it becomes a near perfect hybrid of the Giallo and Poliziotteschi genres. 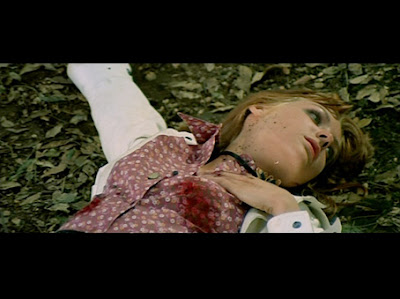 Starting with a typical genre trait opening murder, we see the poor victim rolling down a hillside after being stabbed to death by the assailant. Through a speedy montage, various witnesses see the murderer fleeing from the scene of the crime. A Man stares out of his window, a balloon seller later points the killers path of escape to the police and a woman making out with her boyfriend sees the killer as she winds down the steamy window. This is where Tessari and Gianfranco Clerici [Ruggero Deodato’s Last Cannibal World 1977, Cannibal Holocaust 1980, Phantom of Death 1988, Lucio Fulci’s New York Ripper 1982 and Don’t Torture a Duckling 1972], start laying out the red herrings for us to chomp down on as he brings us into the movie. 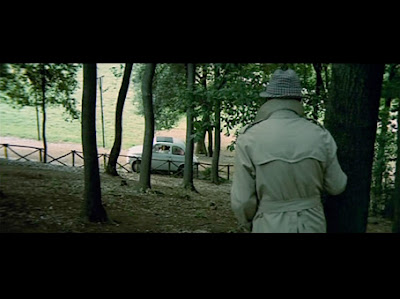 Pretty soon Inspector Berardi’s [Silvano Tranquilli - Paolo Cavara’s Black Belly of the Tarantula 1971, Silvio Amadio’s A Smile Before Death 1972 and Umberto Lenzi’s Violent Naples 1976 among others] hard work pays off and they bring in sport newscaster Alessandro Marchi [Giancarlo Sbragia], their prime suspect. The Victim - French exchange student Françoise Pigaut [Carole André – Visconti’s Death in Venice 1971, Lucio Fulci’s White Fang 1973 and Massimo Dallamano’s Colt .38 Special Squad], was a friend of his daughter Sarah [Wendy D’Olive – Mike Nichols’ Catch-22 1970 and Joe D’Amato’s Cormack of the Mounties 1974], his fingerprints where on the murder weapon, the stains on the victims coat match the interior of his car seats , his coat – as described by the witnesses – was sent to the cleaners by his wife Maria [Ida Gali once again as Evelyn Stewart – Mario Bava’s The Whip and the Body 1963, Lucio Fulci’s The Psychic 1977] in a rather held back performance, not to mention that his skin was found under her nails - Alessandro seems to firmly hold a one way ticket to the slammer for the rest of his life. 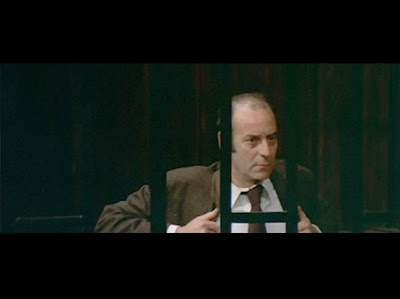 Enter the sub plot that will spin this movie around and get the tempo back to a firm beat. While her father Alessandro is in custody, Sarah starts dating Giorgio [Helmut Berger - from all those great Visconti movies and Tinto Brass' Nazisploitation classic Salon Kitty 1976 ] a filthy rich music student who was Pigaut’s boyfriend before she was killed – which isn’t disposed to the rest of the cast, but we know it and it’s soon going to work it’s way into the narrative. Anyhow it’s a relationship that will get ugly before the climax. Simultaneously Alessandro takes to the chair during his trial and tells how his car was broke into several weeks earlier, the knife, his gloves and a black leather bag being stolen at the time. Marchi’s defence, Attorney Gulilio Cordaro [Günther Stoll – Dallamano’s What Have You Done To Solange 1972 and Jesus Franco’s The Castle of Fu Manchu 1969], starts trashing the prosecutions case and as a favour to Sarah, even Giorgio testifies on behalf of Alessandro. 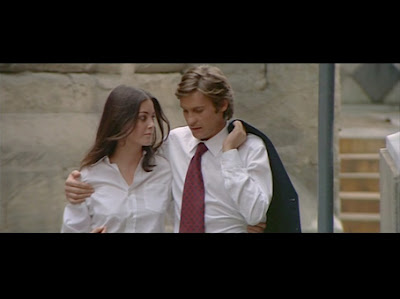 A string of event’s that expose double crossing lovers and intricate relationships are told in great Hitchcockian fashion – let the audience in on the plot and keep the characters in the dark – all lead up to a second murder and further complications for the cops. Not to mention Alessandro who is held captive, even though his Attorney Cordaro claims he’s doing everything in his power to get his set free. But when the obligatory Italian husband’s lover makes an entrance he’s off the hook thanks to a watertight alibi. Once again we are desperate to solve the mystery and expose the killers identity, and thanks to he complex weave that’s been woven into the narrative we have a whole new set of prime suspects.

In a final reel twist Tessari chucks in a brief blackmail subplot that comes kind of unexpected, but leads up to the greatest reveal of them all. You won’t see this one coming and you will be surprised as all your conclusions are once again shattered. And for a change the motif behind the killings is actually quite logic, which once again proves that Tessari and Clerici are masterful screenwriters. The two worked together on several movie’s and the results where often very satisfying. 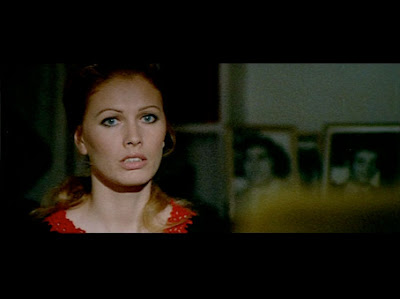 I can feel that there perhaps are a few courtroom scenes to many in the first half of the movie, but it’s all part of the set up, as in the second half all the conclusions that we have come to make are thrown aside when Tessari kicks the movie up full throttle. We are certain that Alessandro is the killer or at least perhaps hiding the real killer, and as soon as this presumption is made, he throws us a tight series of red herrings at us when a second victim is found only to have us jumping at new conclusions – the way only Gialli can, inviting the audience to be the amateur detective.

Just like his later Giallo, Puzzle 1974, a fantastic movie in it's own right, Tessari takes a delicate approach, avoids the predictable clichés and focuses more on the characters and their development than the usual trait of violent deaths and jazzy scores sat to wild cinematographically compositions. And it’s a healthy break from the fast paced moves of other movies in the genre at the time period. The slow pace also is where Tessari manages to build his characters and give us an insight into the deceptive reality behind the fancy façade that the characters hold towards the audience upon first glimpse. 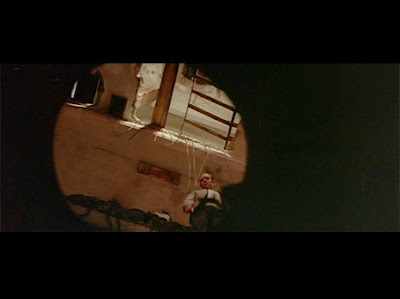 There’s a great returning gag with Inspector Berardi’s espresso that keeps coming back every time they are in the office, he can never get that perfect espresso that he craves, and it gives a neat little comic relief to the movie.

The movie features a terrific score by Gianni Ferrio [Who scored several other Tessario movies, among them the 1974 Giallo Puzzle and also Luciano Ercoli’s Death Walks at Midnight 1972 and The Rip-Off 1977], which is possibly one of his best scores. Take notice of Ferrio’s opening score and you will hear how he fuses in Tchaikovsky’s Concerto No1 into the opening scenes, and that’s not just coincidental as it will be of major importance to the rest of the movie. It’s the record that Françoise had with her before she was killed, it the record that breaks down Giorgio as he reminisces about his lost love, and it’s also the music that is of importance to the killer in The Bloodstained Butterfly. Another Gialli trait - the fine art that triggers the murderers killing spree! 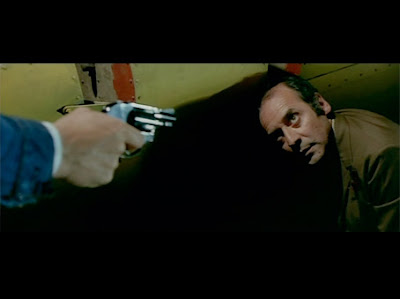 Half the fun of great Gialli is trying to figure out the title of the movie, as the title often refers to a specific item, incident or scene found in the narrative. Dario Argento’s Bird with the Crystal Plumage 1970 refers to the bird in the zoo that becomes a valuable clue to solving the case, Profondo Rosso 1975 is the grizzly climax - deep red blood. Sergio Martino’s The Case of the Scorpions Tail 1971 to the photographic image that eventually exposes the killer, Fulci’s Murder to the Tune of Seven Black Notes 1977 to the melody that plays on Virginia Ducci’s watch - which is why the US title sucks so hard, Umberto Lenzi’s The Oasis of Fear 1971 to the house they spend the main time of the movie in and so on and so on. The title The Bloodstained Butterfly also has a semiotic significant within the movie. The title is a reference to the necklace butterfly that Giorgio bought Françoise before she was killed – a butterfly soon to be stained with her blood. 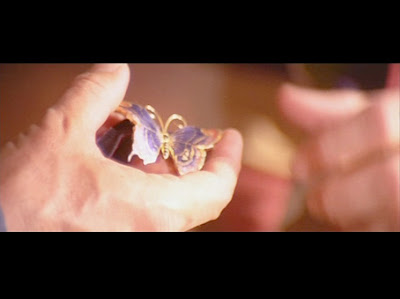 Duccio Tessari’s The Bloodstained Butterfly is a wonderful piece of Gialli cinema, perfectly conducted, well performed, holds a splendid plot and is a refreshing change to the common eclecticism of many other movies in the genre. Definitely a one to pop on when you grow tired of trippy, surreal Funky Jazz fests with to many incoherent killings and shifty characters – you won’t be disappointed. 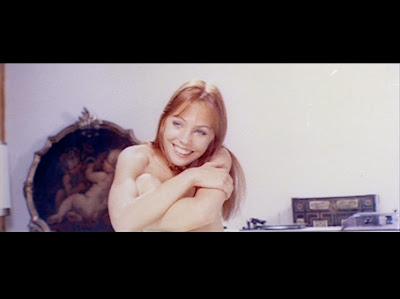 Image:
2.35:1 Non-Anamorphic
Audio:
Dolby Digital 2.0 Mono, English dialogue and a Spanish dub. Spanish Subtitles are forced, but you can work around them if you search the net for the right tricky combo of buttons.
Extras:
Very sparse, only cast and crew filmographies. To be honest, if you really need this movie in it's complete uncut glory you need to find the rare Italian Medusa release, or the German release, but I can't remember which company. X-rated perhaps?

Here's that great score by Ferrio for your audio pleasure.

And here's the opening titles... with a scene not included on the Spanish Manga films release.