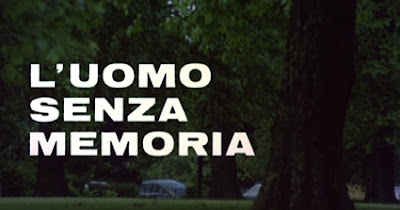 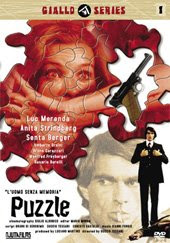 Story:
In London a tricky problem is presented to Edward [Luc Merenda], who has just recovered from a serious car accident. He can’t remember who he is. This is especially troublesome for him as people from his past start turning up and demanding that he “gives back the money” he owes them. He learns that his passport claiming he is Peter Smith is a fake and his real name is in fact Edward. The trail leads him to Italy where his wife Sara [Senta Berger] still unaware that he’s still alive has started putting together the shatters of her life since he went missing in London some years ago. After an awkward reuniting Sara decides to give the “dirty rotten bastard” a second chance. Edward is remorseful to learn that he was a “dirty rotten bastard”, but he has really lost his memory and needs her to give him a chance so that he can get back on track. Then George [Bruno Corazzari] shows up outside their door. George claims to be a mate of Edwards, and if Edward doesn’t return the drugs and money he was holding onto when he went missing George will kill him and then their common boss will kill George. Edward has to start putting together the pieces of his puzzle in rapid progression now, because there are lives at stake. 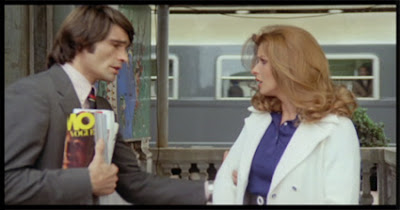 Me:
I’ve said it before and I’ll say it until time stands still, there’s nothing as entertaining as a good Old Italian Giallo. I’ll fight to the death to declare that there are NO bad Gialli, the scale goes from great ones and lesser good ones, bad is not part of the genre. Duccio Tessari’s L’uomo senza memoria is one of those Giallo that could have been so much more, but if you can stay with it through out the fist half the second half really takes off and it manages to redeem any tediousness that it may have caused in the set up. Luc Merenda walks around in confusion, always the hard ass, dishing out sarcastic comments and uses his fists over his mind as he tries to puzzle his life back together. But unfortunately he never quite manages to persuade me that he’s really confused, more just his regular old Detective mimicry as he tries to figure stuff out. Austrian Import Senta Berger pulls this off like a charm. She fits the midlife wife who is desperately trying to put her life together again with the help of neighbour kid Luca [Duilio Cruciani] and Doctor Reinhardt [Umberto Orsini] as she flirts her way through her crisis. The dramatic tightening of the noose half way through as the pieces start to fall together and the original plan to smuggle drugs out of Italy is exposed really good and presents a great example of Giallo at it’s better state. It’s also a tightly woven movie as all the plot plants get paid off towards the conclusion, Little Luca’s constant photographing of Sara, the chainsaw the gardener keeps forgetting to put away, that disgusting little dog, all subtly planted just to comeback and deliver new pieces of information, who the mysterious woman is, where the drugs are etc., as the movie moves towards a truly grizzly climax. 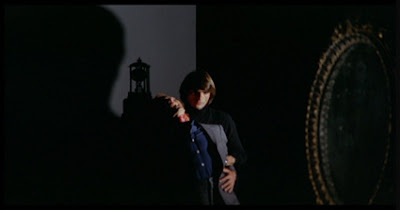 Duccio, with several successful Peplum & Spaghetti Westerns to his credit only ventured into Giallo territory a few rare times, Puzzle being one of them. Not quite as known as his previous attempt The Bloodstained Butterfly, but on the other hand the story here has been scripted by Giallo Script Maestro Ernesto Gastaldi which almost always guarantees placing the movie in the upper half of that above mentioned scale. Staying true to most Gialli, the who dunnit toying with the audience is there, but also by stepping away from the common Gialli traits of sex, murder and assassins in black gloves Gastaldi and Tessari flip this one over and instead focus on the characters, the amnesia and the actual mystery of what goes where, who know what and who is who. As mentioned previously if you just stay put during those first forty minutes the second half is a great piece of Giallo frenzy with double crossing mates, backstabbing foes, and also when the gorgeous Swede Anita Strindberg makes her entrance into the film, although she’s definitely underused this time around. Its brilliant how they really use the amnesia to create empathy for Edward, and also how as his vicious background as a henchman comes crawling back to him in flashes every time there is a violent encounter. And once again the genre proves that you can’t trust anyone in a Giallo, because when you least expect it the tables can and will be turned and friends prove to be foes. Is George going to stick up for his old mate and turn sides, is Sara’s best friend and suitor Reinhardt going to turn against her, is Sara even who she says she is, how much does Edward really remember or will it even be the little Luca who is going to be the mastermind behind the fiendish dope plan? Those are the questions that you face when watching this excellent movie. 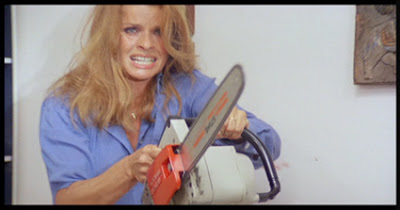