The Oasis of Fear 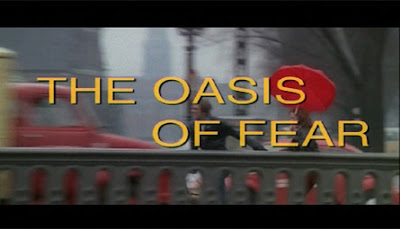 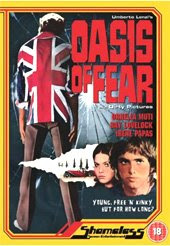 Story:
Two peace loving hippies, Ingrid and Dick, make their living by peddling smut that they pick up in Denmark and sell for a fortune in Italy. Selling off all their stock, they go wild spend most their profit on clothes, food and champagne and soon find themselves back at square one again, and after being ripped off by a travelling biker gang they are completely broke. In desperation they make their own “dirty photographs” to sell to the punters, but this leads to them being apprehended by the fuzz for breaking the law. Their camera confiscated, they are told to get out of the country or they will be thrown in the slammer for selling their homemade erotica. Keeping a positive spirit they start their trip back to stock up on new items, but after trying to exchange some passport booth pics of Ingrid at a gas station their paranoia runs wild, and they try to hide. Luckily for them, they come upon a house where they plan to hide out, repaint the car and keep out of sight for a while. But the house is not abandoned, and as they start to hang out with the ever so nervous Barbra who lives there, sinister plans are sat in motion… 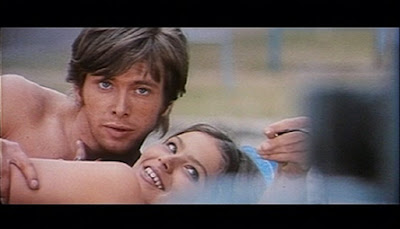 Me:
Good old Umberto Lenzi, a very underrated genre director who’s unfortunately mostly remembered for that god awful Cannibal Ferox [1981], (god awful in a good way) the one supposedly “Banned in 31 countries” one, the sad reworking of his previous masterful entries into the obscure Cannibal genre. The 1972 Man from Deep River is the one to check out if you ever want to explore that depraved world of death violence and flesh easting savages (or Deodato's magnificent Cannibal Holocaust [1980] of course). But don’t be fooled by the reputation that Ferox has labelled this great director with, because in many a case Umberto Lenzi made brilliant genre movies. He directed some of my favourite Gialli, some truly disturbing horror flicks and some incredible poliziotteschi movies too, not to mention all those Swords'n'sandals and westerns. So don’t write him off so easily thanks to that one reknown gutmuncher. The Oasis of Fear, or rather, An ideal place to kill, if you prefer a proper translation of the title and not a cheesy re-titling, is a fascinating and impressive thriller where you’ll never quite know where things are going to go. Brilliantly cast with Ray Lovelock as the English hippie Dick Butler, a young Ornella Mutti in her third starring role as the sexy Ingrid Sjöman , and screen legend Irene Papas as Barbara Slater, the desperate housewife to say the least. 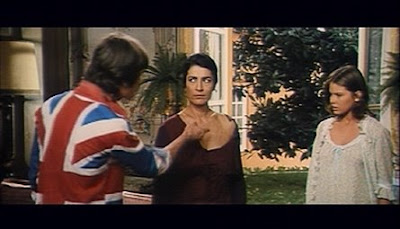 It’s an interesting movie as Lenzi spends so much time building up these two sympathetic young characters before starting to push them towards their descent. As all good storytellers will tell you, you have to build to a high before you can hurl your characters to a low to motivate that noble climb back to stature. That’s pretty much what Lenzi does with all three of the lead characters, as he has the young hip sexy Dick and Ingrid wind up in the house of the distraught housewife Barbra. From the start Barbara is very nervy, and wants them to leave, but pretty soon she’s making moves on Dick and downing spirits with them as if there was no tomorrow. This is where the gialli-ish themes start to make their way into the movie, as we understand that Dick and Ingrid are setting up Barbra, or is perhaps Barbara the one conning the young couple. A healthy amount of kinky sequences later the all is in full movement as Dick and Ingrid discover that Barbara’s army husband isn’t on his way back from the base, but in fact dead in the boot of his car. Now both parties have to keep a calm face as Military police and the nosey gardener keep interrupting their suspenseful mind games. Who will get the blame for the murder? Will it be pinned on the young couple or on the housewife? Who’s fooling who? Exciting stuff that will keep you on the keep you engaged as the values shift back and forth until the shocking ending. 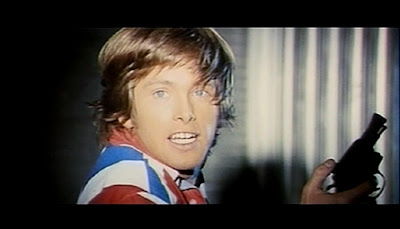 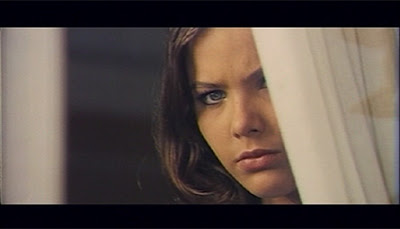 Perhaps not as twisted and disturbing as some of his Gialli or as dark and violent as his poliziotteschi’s, but still a very entertaining film, with great lead actors, a full range of fantastic genre super names in bit parts [Calisto Calisti, Jaques Stany and Michel Bardinet to name a few] and then there’s the terribly catchy theme song that frequently is reused in a varied number of arrangements, even an Indian influenced one to accompany Mutti in Indian outfit, by Bruno Lauzi. Eugenio Alabiso’s rapid editing has to be acknowledged too, as he really keeps a great tight pace throughout the movie. But the main ingredient to make this movie worth the while is the simple fact that it’s character driven. The characters and their interaction is what make this movie flow, instead of the customary tom foolery and set up in between each murder of the common Giallo. To top it all off, Shameless have put together a complete rebuilt version of the movie where several scenes previously missing are back in place. Scenes that you won’t really understand why they where taken out as they are of plot specific nature! Great stuff indeed, Umberto Lenzi in great shape and form!

Extras:
Trailers for other Shameless Screen Entertainment releases, [Torso, Strip Nude for Your Killer, Baba Yaga - Reloaded, Watch Me When I Kill, The Frightened Woman and The Designated Victim] Trailer for The Oasis of Fear and a rather entertaining, and informative text commentary by The Wilson Bros.