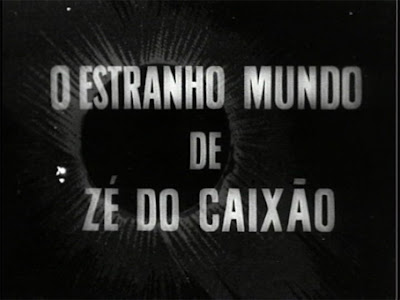 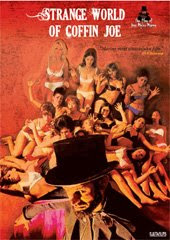 Story:
Tales of horror, depravity and human suffering are presented as José Mojica Marins' alter ego Coffin Joe brings us three terrifying examples collected together in the piece he calls The Strange World of Coffin Joe. See a doll maker and his delicious daughters take on the vile burglars, see a mute hunchback’s final carnal pleasure as his love is laid to rest, and see the seven days of torment that prove Professor Oaxiac Odez deadly thesis. Prepare yourself for sights you will never forget in The Strange World of Coffin Joe! 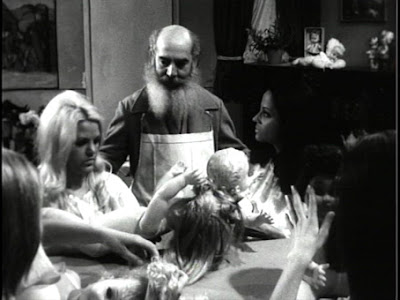 Me:
Well if you want to talk about world cinema and the underbelly of subgenres around the world, you should at least have seen one or more Coffin Joe flicks. José Mojica Marins, The Brazilian legend who has made at least thirty-four movies since his debut Sentença de Deus in 1958 has a decent back catalogue for cineastes of the obscure to explore and enjoy. The Strange World of Coffin Joe opens to images of violent nature and stormy weather haunts the skies, before Mojica’s voice is heard setting up the movie with a series of philosophical questions, a trademark Coffin Joe opening if there ever was one. And also made homage to in Brazilian Director Tiago Belotti’s zombie flick A Capital do Mortos, and like I previously mentioned, if you ain’t seen a Coffin Joe movie that would have been completely lost on you. 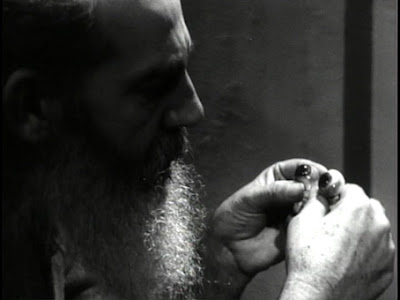 Then we are introduced to the first tale; “Doll maker” where we are hurled and a world of depravity as nightclub guests dance and drink, dance and drink, all shot from subjective angles where women are indefinitely objectified as they gyrate their lower torsos and breasts seductively at the camera, and drunken men try to grope their dates. In this setting, four young men watch as the Doll maker delivers his latest creation to the bar owner. Its amazing remarks the bar owner, the eyes look so real he says before paying the old bearded man. Figuring that the doll maker should be holding onto a fair amount of cash, as he’s just been paid, the four roughnecks follow him home with intention to steal his earnings. But there they find something that tickles their fancy far more than the petty cash they realise they won’t be finding, the doll makers four beautiful daughters! After a fight with the old man, who they think they have left for dead, they get into bed with the young girls and try to rape them, but when the girls stop resisting and almost welcome them the doll maker rushes in and laughing aloud with his daughters shoots the four men dead. After a for 1968 measures rather gruesome scene of decapitated heads the secret to how the doll maker gets the eyes so realistic is revealed. So far The Strange world of Coffin Joe does little to make me rant on about cinematic genius, there’s not to much happen in the first instalment that hasn’t been show in genre cinema before at this age and time. And neither do I understand why his movies constantly got banned in his home land, there was nothing there to get too worked up about. But that’s all about to change as we enter the second episode… 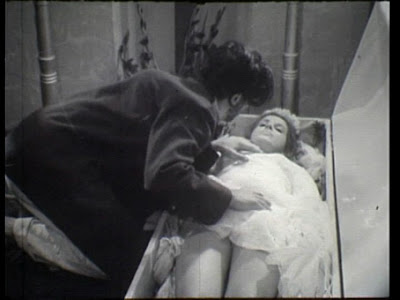 “Greed” showcases why Marins is an interesting director, as this short segment has no dialogue, “an experiment in making a movie with out any word’s” Marins’ is know to have said about this episode. And it works; there is no need for words here, as we watch a wealthy woman walk past the disfigured, hunchback selling balloons on the town square. He falls head over heals in love with her and begins to follow her around. The soundtrack is really corny and with its strange mix of music boxes and seaside pipe organ tunes it brings Carnival of Souls and Early John Waters movies to mind, which is a good thing. The hunchback follows his love around fully aware that he will never have her, especially when she starts to prepare for her wedding. It’s during these preparations that she drops a box containing her shoes. The hunchback picks them up thrilled as he now finally has a reason to face the woman. But he never gets the opportunity. She’s all too occupied preparing her wedding, and on the day of the wedding, she’s murdered on the stairs to the church by a jealous rival! Despair! But the hunchback doesn’t give up that easily as he watches the mourning funeral guests leave the crypt where the young woman is laid, he finally sees his chance. He enters the vault, unboxes the shoes and lovingly places them on her feet… Then he starts lifting up her dress… Finally the hunchback has his woman. Whoa! Not only very impressively told by not using any dialogue, Marins also deals us a shock ending with necrophilia! Now I start to understand why he was hated so much by his critics and censors. But wait, there’s more to come, and you ain’t seen nothing yet… 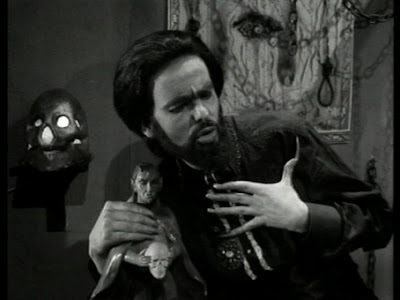 The final instalment “Ideology” sees Marins himself getting in front of the camera. This time he’s not his usual Coffin Joe persona, but Oaxiac Odez (and you’ll kick yourself when you realise that it’s Ze do Caixao [Coffin Joe] backwards), an obscure professor invited in to a TV show called “The News Men” to defend his latest research and thesis. Nonchalantly he is little bothered with the interviewer’s questions and dismisses them one by one. After the show he invites the anchor to his house to further discuss his research. The anchor, Alberto, accepts the invitation, and later shows up at Professor Odez mansion. At first they are invited into a room where sexual acts are mixed up with sadistic beatings, copulating couples are whipped and thrashed but don’t stop their activities. Proof of my theories, claims Professor Odez. Alberto and his girlfriend, squirm in disgust and want to leave, but Odez has his army of male and female zombies force them in front of a small theatre stage, and the carnage begins in a show that would have made Grand Gugniol close its eyes. A man is drawn apart on a rack and then devoured by Cannibals, demented rapists paw a resistant maiden before throwing acid in her face. As her once good looks melt off her face she falls to her knees and kisses the feet of her assailants. Outraged and appalled, the visiting couple tries to leave but the sinister professor has other plans for them. He forces them each into separate cages and locks them up for seven days telling them that in seven days they will understand his theory that will prove the triumph of instinct over reason. Seven days without food or drink and each day a new torment as Odez quotes passages from the bible to them. After the seven days Odez releases the famished woman and after slitting Alfredo’s throat, she drinks his blood hence proving the mad professors thesis. Finally the professor and his zombie henchmen feast on the barbecued remains of the young couple. Coffin Joe’s omnipotent voice is reheard and a collage of phobia inducing insects and reptiles is shown as he sums up his movie. Finally there’s an extra sequence added on where meteorites hammer down upon the professor’s house exploding it in the process. A final scene where judgment is passed on the mad professor, which the Brazilian censors demanded that Marins added to the film if it where to be released. 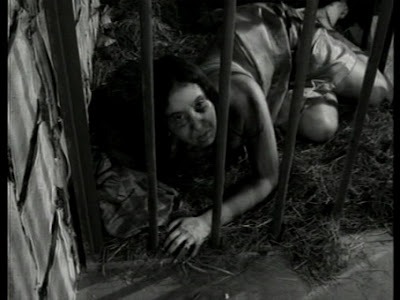 When the movie is finished you’ll have a different image of Coffin Joe that was imagined at the start, as you have witnessed the death, necrophilia, cannibalism and sadistic torture held within, and it’s quite easy to understand why this guy was looked upon as a trouble maker in his homeland. Even though the movie is pretty poor technically, i.e. poor photography, sloppy editing, and really bad soundtrack, both audio and score, it’s still an entertaining movie and definitely something you would want to see. At the least it’s an influential, impressive and visionary director creating some of his best work in his own special take on surrealist horror and exploitation.

Extras:
There’s a quite gimpy introduction with Marins in full Coffin Joe outfit, presenting the movie as he walks around a “dungeon” full of vampires, monsters and scantily clad lasses. The Original Trailer, Trailers for other Coffin Joe Movies, a Poster Gallery and a José Mojica Marins filmography. Then there’s also an animated short movie directed by Victor-Hugo Borges.