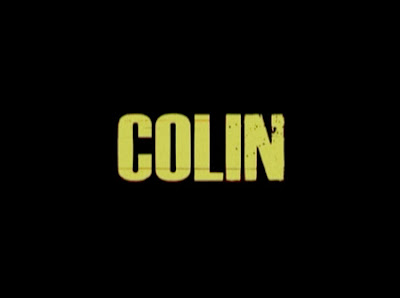 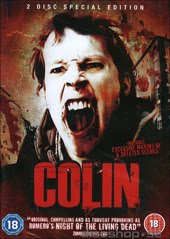 I’m not too much for writing on modern horror. Sure I’ll watch it, enjoy it and every now and again one of them will bring something new to the scene. But I can’t see myself returning to the movies of the last decade with the same passion as the movies of my youth – well possibly some of the J-horror’s, the South Korean scene, a couple of American flicks, and the terrific wave of stuff to have come out of Europe these last few years – but not in the same way as the movies that shaped my passion for genre cinema did. They just seem to lack that curiosity, lust for exploration and naïveté that movies of the past had, again with a few exceptions of course. These are the movies that have me thinking of them the morning after I have seen them. These are the ones that stick in my mind and actually are worth the time putting down my thoughts on. These are the ones that probably will be referred to in the next decade. 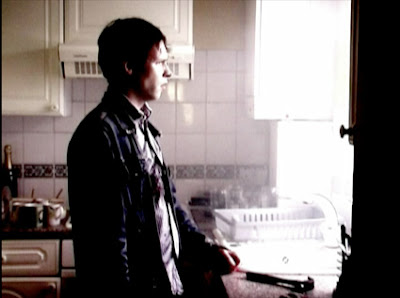 Every now and again Independent cinema produces some amazing horror features shot on minimal budgets giving maximum effect. Many of my favourite movies - and yours - are movies produced by devotees outside the major studios. Movies that are shot on an almost nonexistent budget and are made by true enthusiasts who know exactly what they want out of their minimalistic production. And most often they have a completely new innovative idea that they have come up with which makes the movie so much better than the usual larger studio churn outs. 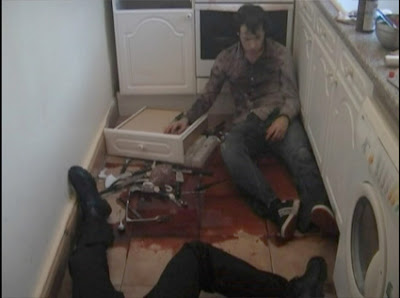 Marc Price’s 2008 indie horror film, and first feature, Colin is one of those films that stands out and is definitely much more interesting than a lot of the contemporary horror.
Supposedly shot on a budget just under a fifty pounds Colin is an interesting and rather impressive movie even though it has some flaws. I’ll return to them later. It holds high quality, an intriguing narrative and a fascinating rush of insight at the end of the movie. It plays with the Zombie genre and respectfully holds it close to home, and several references to other great movies of the genre are apparent. The unique twist to Colin is the unique choice of having Colin, the lead protagonist, actually be a zombie. We see the world through the zombie’s perspective. 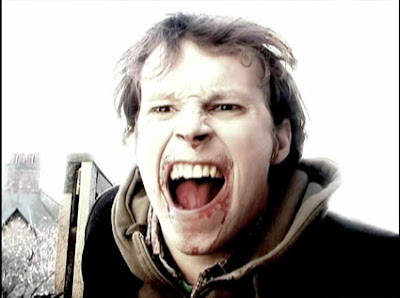 I’ll give you a run through of the movie's premise without spoiling it, because it is a movie that should be seen. So, starting off with the protagonist Colin coming home from an off camera struggle we see him enter his home, shout for his friend, who obviously doesn’t answer we are introduced to our leading man. Washing up after the off camera fight he realizes that he has a bite on his arm – a bite that means one thing – he’ll return when he dies. In panic he tries to wash the bite and misses to see that his flat mate Damien shuffles into the kitchen and bites his deeply in the back of the neck, securing that within a few minutes this character will be coming back from the dead. A battle takes place, where Colin violently rams a kitchen knife repeatedly into the head of his flatmate Damien. This opening montage sets the tone, we now know that this movie is going to be violent, we know that the camerawork will be shaky and handheld giving that guerrilla style faux documentary style of photography. The score is going to be low key, and I don’t know if there ever was a movie to open on such an ominous tone – as you know that a bite from a zombie means definitive damnation. Protagonists set in a damned world filled with zombies is one thing, but starting out as a zombie, that is profoundly dark. 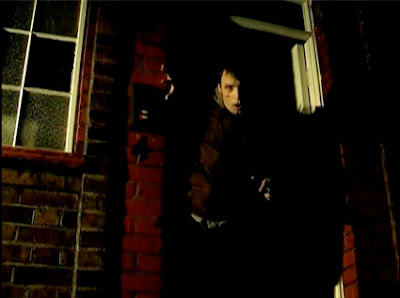 Colin [played by Alastair Kirton] turns into a zombie, and starts his journey. So far we do not know to where or why – the thread that will give that rush of insight at the end – but until then we will merely observe him as he shuffles his way through the streets seeming to just be roaming, like zombies do in zombie films. But no adventure is complete without it’s fair share of obstacles and trials, which Colin faces several along his way. During the course there are vigilante zombie slayers, zombie hordes that wreak havoc, and even family members that become part of Colin’s trial. The thing that I liked the most is that the film stays true to the mood set in the opening sequence. There are no cheesy gag’s that try to go for a few bursts of relief giving laughs. It stays dark, brooding, and sinister throughout. And being a zombie, Colin obviously decomposes more and more as time goes by. Scars do not heal, and a painfully looking facial wound that he receives when a gang of slayers chuck a pipe bomb at the zombies looks completely revolting at the end of the film. Because the film does end, Colin tattered and torn, but finally reaching the end of his objective, and in some twisted way the ending is almost an opposite of the opening. Where the movie opens on a downer, it lands on an upper – a twisted sick upper, but still a positive compared to the negative of the start. 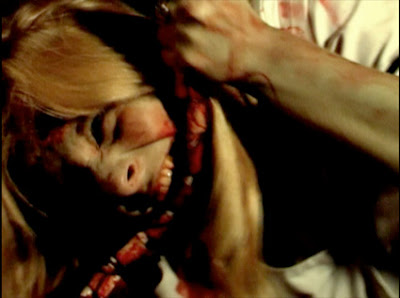 Now then why are people raving about this flick then? What makes it so special? What does his low budget zombie flick bring with it that none have before? Well if you want my sincere opinion on it I’d call it a love drama set in a horror milieu. Shocked? Well yes of course you are, but that is what I consider it to be and I’m sure that you will see this when you reach the end of the movie. As said before there is a rush of insight that I feel almost equals the one at the end of M. Night Shyamalan's The Sixth Sense 1999. You realise that you have been watching Colin in a conscious journey, a journey based on the most positive of all values - Love. And when you come to this conclusion, watch the film once again, and you will see all the referents delicately planted throughout the movie, the colour signifiers, the signs, and the motifs that drive, or perhaps by instinct direct Colin towards his goal, all make sense when you know what they represent. It’s a really splendid weave that Price has woven together here, and I agree with the critics that claim it to be one of the most interesting zombie films for a long time.
Another little detail that fascinates me is the power that narrative has on us, and just how easily we, the audience, are manipulated into taking sides. Simply because we have spent some time with Colin we actually take sides with him. There’s a scene where some guys attack him and try to steal his sneakers – and you find yourself hoping that he’s going to make it out “alive” without them succeeding with their theft. Now when you sit there rooting for the zombie - a figure that otherwise usually only is there so that a protagonist can smash, or blow their heads to smithereens – then you know that you have been mind fucked by some serious dramaturgy and a well written screenplay. It’s an interesting approach that hasn’t been utilised in the zombie genre before to my knowledge. Although George A. Romero did this slightly in Day of the Dead 1985, Edgar Wright's Shaun of the Dead 2004 has a similar themed finale and Bruce La Bruce uses the same approach as Colin in his 2008 gay comedy horror movie Otto; or up with Dead People, and I’m sure that it will be used again. 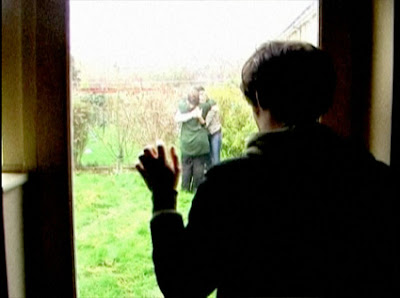 Colin is a intelligent and engaging movie, although the main problem I have with the film is that it’s way too long. The movie, just like the zombie Colin, simply shuffles forth and suffers from many tedious sequences. In the most humble way I would definitely have recommended Price to have cut at least a half an hour or more out of the movie, because there are some really slow and unnecessary parts that wouldn’t be missed if they weren’t there. The removal of that tiresome footage would end up giving him a compact hour of interesting zombie mayhem that still would stand out and be unique in its own way. 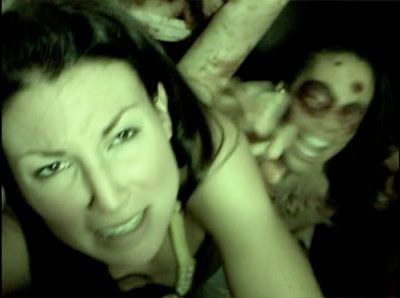 Neither is the proactive zombie a new novelty in any way, we have seen zombies make active choices and take actions before, as early as 1979 Lucio Fulci, with the help of Elsa Briganti and Dardano Sacchetti's screenplay for Zombi 2 sees the amazing Zombie vs.’ Shark scene – a possibly first action taken outside the norm. And in George A. Romero’s Day of the Dead 1985 he has Bub the zombie (played by Sherman Howard) take actions outside the usual hunt for food criteria that befalls zombies. A theme Romero constantly returns to in his movies, giving the zombie more conscious than a simple eating machine. But Colin holds a revelation, as you now may actually see, a revelation that affects all zombie films that have staggered their way past us before. The until now aimless wandering of the zombie may actually be conscious making decisions. Remember that scene in Romero’s excellent Dawn of the Dead 1978 when the lead characters discuss why all the zombies have returned to the mall? Well they say that it’s because the dead return to the old patterns they followed when in life, and this becomes even more obvious in Colin. Perhaps all zombies actually have an agenda that they are following, simply stopping to chomp down on a some human brains and entrails along the way. 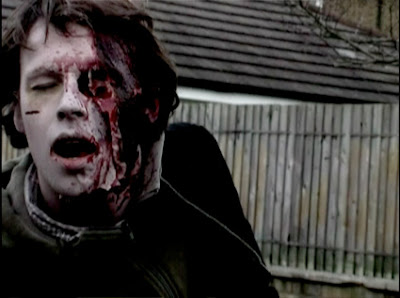 All in all, Yeah I enjoyed Colin more as the movie ended, after I had had that rush of insight, but the journey there is way to slow and uninteresting, because there’s nothing really new in there – so it’s fair to say that Colin is a smart and intriguing movie that should have been shorter, and one of the few movies of the genre that actually get’s better on the second viewing. It’s apparent that Marc Price knows his storytelling and as far as I’m concerned he could possibly hold the future of modern horror in his hands. 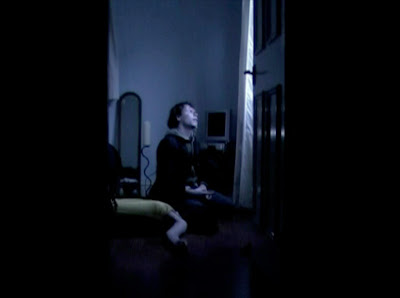 Image:
Full screen 4:3
Audio:
Dolby Digital 2.0, or Dolby Digital 5.1 – unfortunately there are no subtitle options, but then again there is hardly any dialogue to talk about anyways.
Extras:
There’s a decent package of extras on the 2disc special edition. Disc one has an entertaining Audio commentary by director Price, Alastair Kirton, and several other key actors and crew. Disc two contains a forty-minute documentary on the making of Colin, which gives further insight into the movie and process behind it. And finally there are five deleted scenes, which could have been fifteen if you ask me, that play with optional commentary by Price.
- January 31, 2010